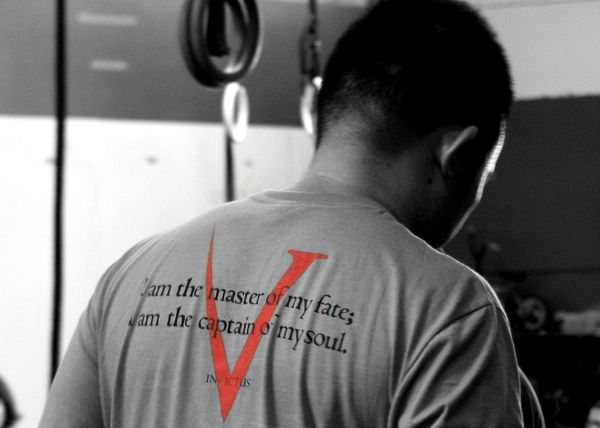 How Do YOU Read the Whiteboard
Written by C.J. Martin

There is perhaps nothing that has caused more historical controversy than interpreting written words. From religious texts to love letters, much blood has been spilled over disagreements as to the meaning and intent of writings. Indeed, I spent 5 good years as a lawyer essentially interpreting words and trying to persuade others to interpret them in a way that favored my clients. It’s part of what makes language so fun.

The “Workout of the Day” posted on the whiteboard each day doesn’t seem to require much interpretation. That does not, however, mean that it will read the same for each of you. How I read the Workout of the Day is often going to be quite different from how I want you to read it.

Let’s use today’s workout as a good example, and build a hypothetical group of members that you will recognize to demonstrate my point. I am the coach, and in walks my first group of the day – coaches Shane, Nuno, Nichole, Katie, Calvin, Michele, George, and Pops and Krazy K. The movements of the “Workout of the Day” are clear – 5 Handstand Push-Ups, 10 Pistols and 15 Pull-Ups – but is that what they’re all going to do? No.

Let me explain and tell you how my group is going to operate.

Shane, Nuno, Nichole and Katie are all going to do the Workout of the Day without modification. These kids all competed recently as part of Team Invictus at the CrossFit Games. They are beasts . . . and they are all totally healthy and accustomed to the relatively high volume that will accompany this workout. (“Volume” simply means the number of repetitions that might be performed.)

Calvin is also a beast and totally healthy. He could easily fly through this workout (might have the best pistols you’ve ever seen – even with a 95 lb. barbell overhead, ask him to show you). So why wouldn’t I have him do the workout as prescribed? Well, because I know his athletic goals. Calvin is a competitive powerlifter. He has been an avid and competitive CrossFit athlete (and might be again one day), but at the moment he has been dedicated to building new and impressive stats as a lifter. I will assume that if he’s joining this workout, he’s looking for a little supplemental work to complement his heavy lifting session. But the volume of this workout (because he could perform well and score many rounds) is not appropriate for his needs. To put it simply, he would perform so many repetitions of the various movements that his heavy lifting would likely be effected for several days – and if he cannot perform his sport, I haven’t complemented anything. So, Calvin is going to do 5 handstand push-ups, 6 weighted pistols (holding a 32 kg KB), and 5 weighted pull-ups (55-75 lbs. hanging from his waist). I also might limit him to 6-7 total rounds, thereby limiting the number of reps performed in the training session to keep him healthy for his primary training – heavy lifting.

Michele and George are are both rehabilitating injuries – and with adequate encouragement, might be back and ready to represent Team Invictus in 2012 🙂 – so I am going to modify their workouts also. Michele has had a long-damaged knee that she has finally decided to heal. That means we need to limit her knee flexion, but still find a way to give her a killer workout. George is recovering from shoulder surgery. Stable movements aren’t too bad, but dynamic movements are no-no’s. So, what do I do with my injured friends? Michele is going to be able to do the handstand push-ups and pull-ups just fine, so we’ll leave those just the way they are. Pistols, however, aren’t going to work. I would, however, love to get her some lower-body activation without the knee flexion . . . so, I am going to ask her to do 10 GHD Hip Extensions holding a 25 lb. plate against her chest. So, she’ll do 5 handstand push-ups, 10 hip extensions with weight, and 15 pull-ups. George has been cleared to perform overhead pressing, but 5 reps might be aggressive, so we’ll just knock that down to 2 reps at a slow tempo – 4 second descent on each. He can knock out the pistols just fine, but kipping pull-ups are off the table during this stage of his rehabilitation. He can, however, perform strict pull-ups, but 15 strict is probably aggressive at this point, so we would probably knock that down to 10 (or 5 if I didn’t already know how strong he was in this movement).

Pops and Krazy K (my parents) are getting pretty darn fit, but at 61 and 52 respectively, I am not sure that’ll they’ll bang this out as prescribed. For the handstand push-ups, I am going to get Pops moving through some different angles and getting used to being upside down (he was, afterall, the 21st fittest 60+ man in the Open), so I will have him do 2 wall climbs instead of the 5 handstand push-ups. Krazy K is going to do an L-seated press with DBs to work the same range of motion. She’ll do 5 reps with a heavy, but manageable weight. Both will do a single-leg squat variation. Pops will stand atop an 18″ box and descend as low as possible with one leg hanging off the box – the goal being to touch his toe or heel off the ground before ascending back to full standing. Krazy K will keep one foot on the floor and lift the other off the ground, then sit to a box and drive up off it from her planted leg. Both can do 5 reps each leg on those variations. Pops has pretty good pull-ups, but 15 might bog him down a bit, so we’ll have him do 8 each round (which he might do consecutively early, and do in 4 and 4 later in the workout). Krazy K is still working on good pull-up proficiency, so she’s going to use this opportunity to build strength in the movement. I am going to have her place her hands on a bar that is 4-6 inches below her full reach. She will then dip until her arms are fully extended and jump a bit and pull until her chin clears the bar. The 4-6 inches allows her to get a little hop that will allow her to pull the rest of the way, but not so much that the movement becomes a jumping exercise instead of a pulling exercise.

So, are the members of my group doing the same workout? No, but they are all engaged in appropriately challenging tasks that mimic the same movement patterns (which means that we can program movement patterns for the next day that will still be appropriate for all of them). And more importantly, they’re all sharing the same space; the same experience; and the same energy. They can be a part of the same community, celebrating similar successes and providing support for one another despite the differences in their needs and abilities. This is invaluable, and this is what makes Invictus unique.

Your coaches are trained to provide appropriate modifications, but more importantly, we pride ourselves on creating an environment that empowers you to make good choices. If a workout looks intimidating, or if you’re not sure how to modify a movement, just let us know. That’s why we’re here. And most importantly, know that you can always modify movements, reps, etc… to make sure the workout suits YOUR needs and abilities.

Terrific article CJ!! You have given me some great ideas for how to scale/modify workouts for my athletes. My classes tend to span the spectrum of fitness, age, and injury rehabilitation. Your mindset and insights to adjusting the daily WOD to accommodate all your athletes, while still preserving the desired stimulus, are innovative and practical.

Thanks for all that you do for the CrossFit Community.