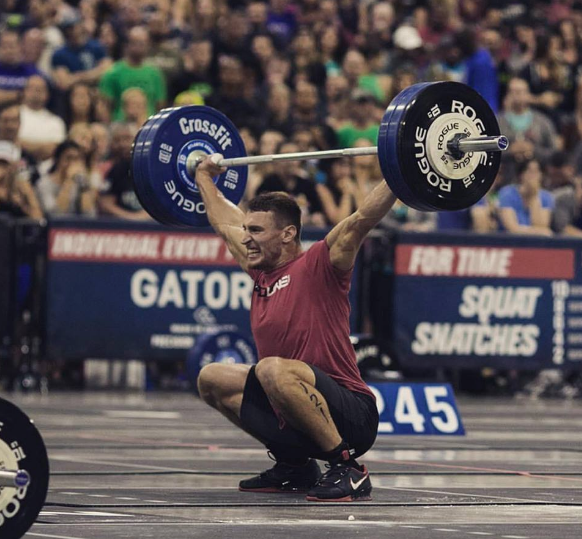 If you have not yet had the chance to read the previous articles about Snatch barbell cycling, then please do so before moving on to today’s Squat Snatch.

The last progression of barbell cycling snatch variations would be the Squat Snatch. This would be used, generally, only when the workout standards require this movement, or the weight is so heavy that one would need to receive the barbell in a full squat position in order to make the lift. A common workout that calls for a squat snatch is “Amanda.” That workout is paired with muscle-ups, so grip and shoulder fatigue can be limiters, requiring strong barbell cycling and efficiency of the movement if one wants to get through the snatches fast. Watch Rich Froning cycle the barbell smoothly and efficiently in the video below.

Note that Rich doesn’t move his feet when he is cycling the barbell. You can also see this in Hunter Britt’s demonstration video below, as it’s one of the performance points we teach athletes to help keep their cycling efficient.

Setting up with a wider stance allows the athlete to pull directly into the bottom of the squat snatch without having to displace their feet – jump and land. Keeping the feet planted saves the athlete time and helps maintain good balance.

Another way to reduce the range of motion is to cut short hip extension. When we lift maximal loads, a strong and full hip extension is necessary, but when you’re pulling under moderate to relatively light weight, you can cut the hip extension and simply pull yourself (or sneak) under the barbell. Remember, this isn’t Olympic weightlifting – just do enough to make the lift and meet the movement standard, while you move the barbell quickly through the reps.

Here are a few points of performance:

Again, the same advice applies here as with the power snatch regarding when to touch the thighs on the descent. It will depend on how heavy the load, and how fatigued the athlete. You can reference this post to read more about when to establish a touch point on the descent in barbell cycling.

Our next series will feature the Shoulder to Overhead movement and its variations when barbell cycling. Stay tuned!