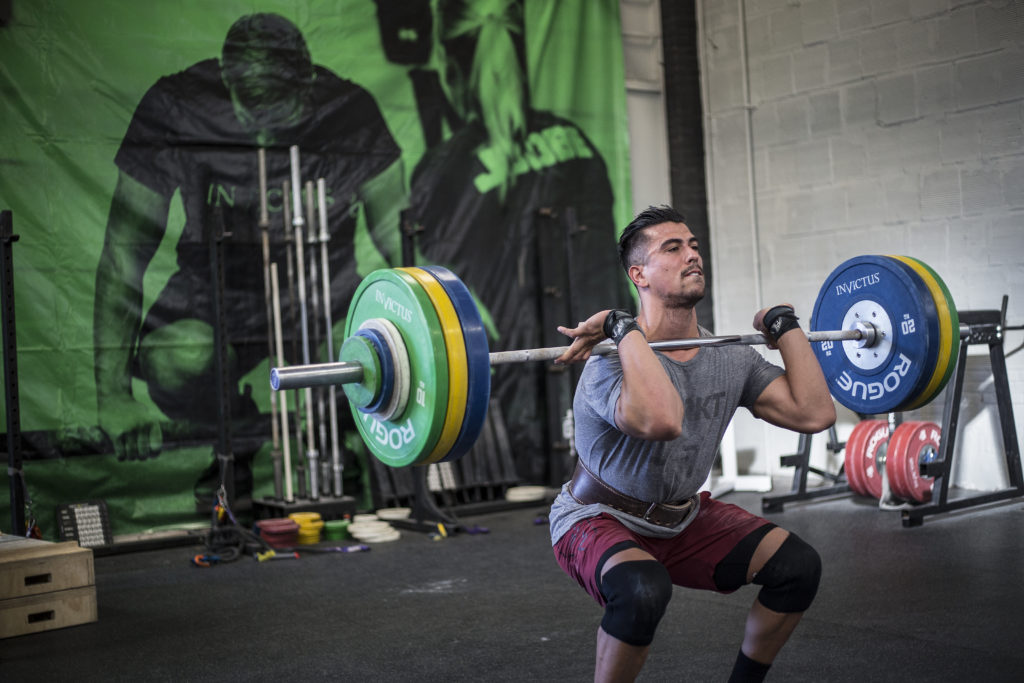 What Does @ 30X0 Mean? Why I Like Tempo Training
Written by C.J. Martin

Slow down . . . it might be your key to avoiding injury and getting stronger.

Tempo training is not just for bodybuilders. Olympic caliber athletes from all over the world use tempo training to become stronger, faster and more powerful.

The benefits of tempo training have been touted for years by the likes of Bulgarian Olympians and their coaches to internationally renowned strength coaches Ian King and Charles Poliquin.

I was introduced to the benefits of tempo training by my coach and mentor, James Fitzgerald, who uses it very effectively to train many of the top CrossFit competitors.

So, what is tempo training in lifting and training?

It’s time for the entire Invictus community to understand how to read tempo prescriptions and understand why tempo training is beneficial.

Tempo prescriptions come in a series of four numbers representing the times in which it should take to complete four stages of the lift.

In a workout, the tempo prescription will follow the assigned number of reps, such as:

Here’s what that means when you’re lifting:

The first number refers to the lowering (eccentric) phase of the lift. Using our front squat example, the 3 will represent the amount of time (in seconds) that it should take you to descend to the bottom of the squat.

(The first number always refers to the lowering/eccentric phase, even if the movement begins with the ascending/concentric phase, such as in a pull-up.)

The second number refers to the amount of time spent in the bottom position of the lift – the point in which the lift transitions from lowering to ascending.

The third number refers to ascending (concentric) phase of the lift – the amount of time it takes you to get to the top of the lift.

Yes, I am aware that X is not a number. The X signifies that the athlete should EXPLODE the weight up as quickly as possible.

In many cases, this will not be very fast, but it is the intent that counts – try to accelerate the weight as fast as you can. If the third number is a 2, it should take the athlete 2 seconds to get the lift to the top regardless of whether they are capable of moving it faster.

The fourth number refers to how long you should pause at the top of the lift. Take, for example, a weighted pull-up prescription of 20X2, the athlete would be expected to hold his or her chin over the bar for two seconds before beginning to come down.

It seems silly to even mention how to count seconds, but I have heard many clients audibly count to 4 in less than one second while under a heavy load.

Got it? If you need more practice, think about how you would perform the following:

For many of you, just understanding how to read the prescription will suffice. Others will wonder why they have to follow the tempo prescription.

Why Tempo Training When Lifting is Important

Tempo training is important at all stages of an athlete’s development – from beginners who simply want to learn to lift weights and shed a few pounds to Olympic caliber athletes of all disciplines.

Here are my top 3 reasons for including tempo prescriptions with lifts:

Quality of movement should be your first priority.  Intensity comes only after one can consistently demonstrate the proper mechanics of a movement.

Proper tempo prescriptions can help athletes develop awareness and body control by giving them an opportunity to “feel” which muscle groups are activating to keep them in proper positions.

We work with a lot of kids, and kids tend to be fearless. They think nothing of plunging into the bottom of a squat, secure in their belief that their young, elastic connective tissue will catch and help propel them back to the top. The problem is, as they descend their knees often collapse inward, their chest sinks in and their pelvis rolls into a posterior tilt (the dreaded “butt wink”).

By requiring a 53X1 tempo, for example, we can help them learn how to keep their chest up, knees out and lumbar spine neutral by allowing them the time to “feel” those positions throughout the four phases of the lift. If the student is unable to control the descent and perform the movement at the prescribed tempo, we know the load is too great.

In more experienced athletes tempo can be used to emphasize problem areas and shore up weak links in technique.

For example, if you struggle in the bottom position of an overhead squat, a prescription forcing you to spend some time in that position will help solidify your technique, create more comfort in that weak position, and permit greater improvements down the line.

Improving the quality of the movement obviously helps to reduce the risk of injury for athletes.

But in addition, slowing down the tempo of lifts can ease the stress placed on joints and shift that additional stress to the muscles powering the lift. More stress on the muscles and less on the joints is a good thing.

Muscles are far better at adapting to increased loads. Connective tissue typically takes longer to strengthen and adapt to the increasing loads, so by slowing down the tempo you can give your connective tissue some rest while still strengthening the surrounding musculature.

Tempo prescriptions also naturally control intensity (and perhaps, rein in egos). Let’s use the bench press as an example. If you excessively load the barbell you might be tempted to speed up the lowering phase and bounce the barbell off your chest – don’t lie, you do this.

But if you know that the prescription calls for a 3-second descent and a 2-second pause at the bottom, you’re not going to be tempted to load anywhere close to the same amount.

Don’t believe me? Give it a shot.

This alone should have been sufficient, but I threw in the first two for all of the coaches out there.

Second, they allow us to shore up weak links by overloading certain areas of movements.

For example, how many of you feel more comfortable with your second and third deadlift reps than your first?

I am guessing a lot, and it’s because you are using the benefit of either or both the elastic “bounce” of your stretch-shortening cycle or your rubber plates hitting the hard floor. But if your tempo prescription called for a slow descent and a longer pause at the bottom, you might actually have to get stronger through your weak points.

Third, slowing down movements with tempo prescriptions can allow for greater amount of time under tension with less overall stress on an athlete’s central nervous system.

This can be particularly important for CrossFit athletes, who are often pushing themselves to the limits with maximal effort lifts and workouts, by creating a way to continue training and making an athlete stronger without overtaxing his or her system.

I know that sounds like coach’s geek-speak, but here’s how you will know you’re recruiting more muscle fiber – it will be really hard.  🙂

If you’re not sure yet about the benefits of implementing tempo prescriptions into your program, I would encourage you to try it for a month or two and see if it benefits your lifts.

If you’re not sure how to create tempo prescriptions and you are looking for a program more specific to your needs than the Invictus workouts of the day, check out Invictus Athlete.

I still don’t understand what the A stands for in 31A1.

You apparently did not watch the video?

A stands for “assist” so that could be a partner, toe tap, band, etc. Whatever assistance you need to get back to position and do a quality “negative” for your next rep.

Great article! I’ve never read an article making tempo so easy to understand. This will help the athletes at our gym as I can see the confused look on their faces when bringing tempo into a workout 🙂

What tempo prescription would you recommend for squats at 65% and 75%, and how often should they be implemented? For example, I am doing a powerlifting program that does not use tempo training, but I would like to incorporate it. Would twice per week be too much, causing a plateau? Thanks!

Perhaps the word “digit” should be used instead of “number” since X is not a number, but a letter?

I need clarification. So on Pull UPs or any movement that starts ascending/concentric phase, we start the tempo training number on the lowering phase of the Pull up?

This is really, really smart.

Great post, but I’m struggling to understand the tempo for pullups or Deadlifts – does one start at the “top” for these movements? Thanks!

For pull ups it can go either way depending on what part you struggle with the most. I don’t see it much for deadlifts though.

For this type of training, what percentage of our max weight should we use?

CJ,
This is a very good explanation of tempo programming. I was not a fan of prescribing tempo until after hearing Janes Fitzgerald explain some of the benefits. May I please have your permission to put this in my CFMV Affiliate Newsletter? I would of course give you the due credit.

I never heard of tempo training before invictus. I love it. It makes you work so much harder for every rep. I would assume that the majority of my pr’s are caused by this great method of training.

Always awesome articles from your box CJ! I’ve always been in favor of tempo training. Sometimes, I incorporate tempo counts with own my DLs (both clean grip and snatch grip). It’s good to see this in writing since a lot have abandoned the idea that this helps with lifts. I have also suggested tempo counts with our CF Kids; it slows them down so that the kids down just flop up and down the squat. Thank you for posting.

thanks for this post. We actually just swtiched our programming over to include a great amount of tempo training. Sharing this with my members will help a lot.

Thank you so much for the clarification. I’ve been following you – though not posting (I know I should be) and was terribly confused as to what those numbers mean. Early on I thought the first two numbers were reps…did that once and only once..haha. Question though on the snatches we did early this week. Can you explain the 1.1 rep scheme? Ended up doing two reps per set, but not sure if that was correct.

did you everfind out what 1.1 means

Good stuff CJ, the tempo lifts are no joke!