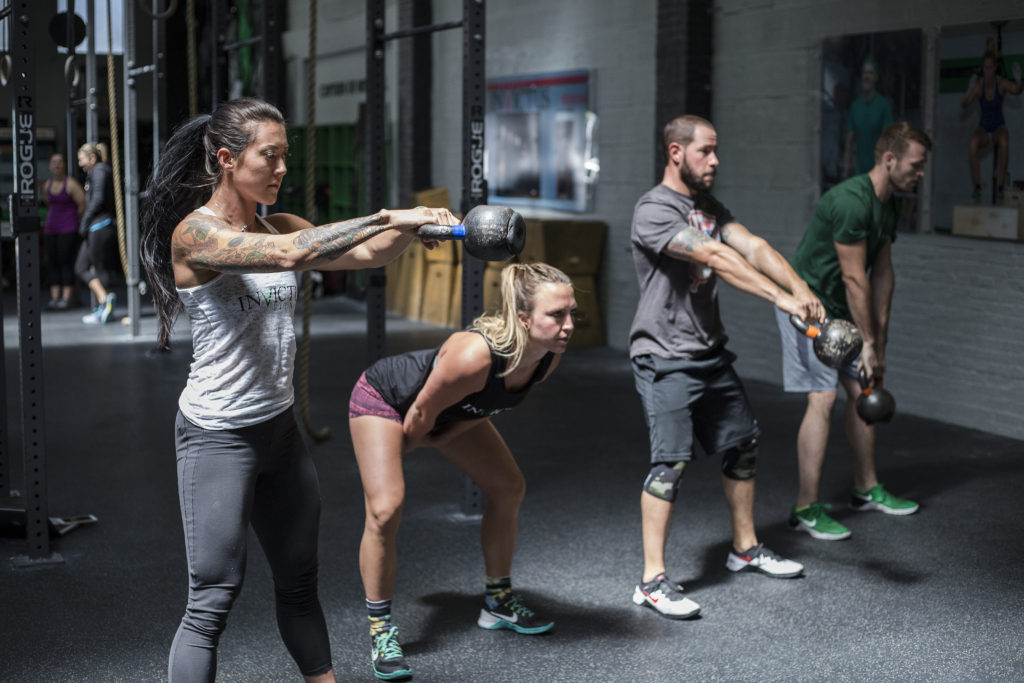 The kettlebell swing is one of the fundamental movements known to CrossFit. The kettlebell, along with the dumbbell, jump ropes, and bumper plates, are the grassroots cornerstone of CrossFit garage gyms before the Mecca of the CrossFit Games ever began or rose to global popularity. At some point, however, the vast majority of the community has come to the “acceptance” of kettlebell swings as a low-back exercise and burner. But this doesn’t have to, and should not, be the case. By understanding the proper bodily rotation and forces of performing a kettlebell swing, we can learn to perform the movement in a way that disassociates from the “low back pump.”

The Error We Frequently See With the Swing

The key point of error in the kettlebell swing happens when the exercise is performed as a squat movement through the forces of external rotation. As the bell travels back between the thighs, an athlete making this error will turn the knees outward by flexing the glutes and quads and externally rotating within the hip capsule. The athlete may appear to “sit” at the end range of the back swing. This common error results in the hips being inhibited from a pelvic tilt, or hinging pattern. The reason this is alarming is that in this “locked” position, the hips can no longer create the desired range of motion and the lumbar spine will then act as a fulcrum to the loading of the kettlelbell. Although the muscles of the lower back are capable of flexion and extension, it is not their primary function which is why swings done in this manner often cause excessive muscle swelling of the low back or worse yet, acute or chronic damage to the spine.

The Solution for Proper Hinging

The solution to this low back pain epidemic is to teach proper patterns of hinging and internal rotation. To properly hinge, the pelvis must be “free” to tilt. Allowing the pelvis to tilt lets an athlete use the proper musculature of the movement pattern to carry the majority of the work. In the case of a hinging pattern, such as the kettlebell swing, the hamstrings function to extend the hips in the safest and most efficient manner possible. The pelvis, in this way, is much better suited to absorb the eccentric loading of a kettlebell swing than is the lower back. If the pelvis becomes the acting fulcrum to the swing, the muscles of the lumbar spine can instead do what they were designed to do – provide static, or isometric, stability. 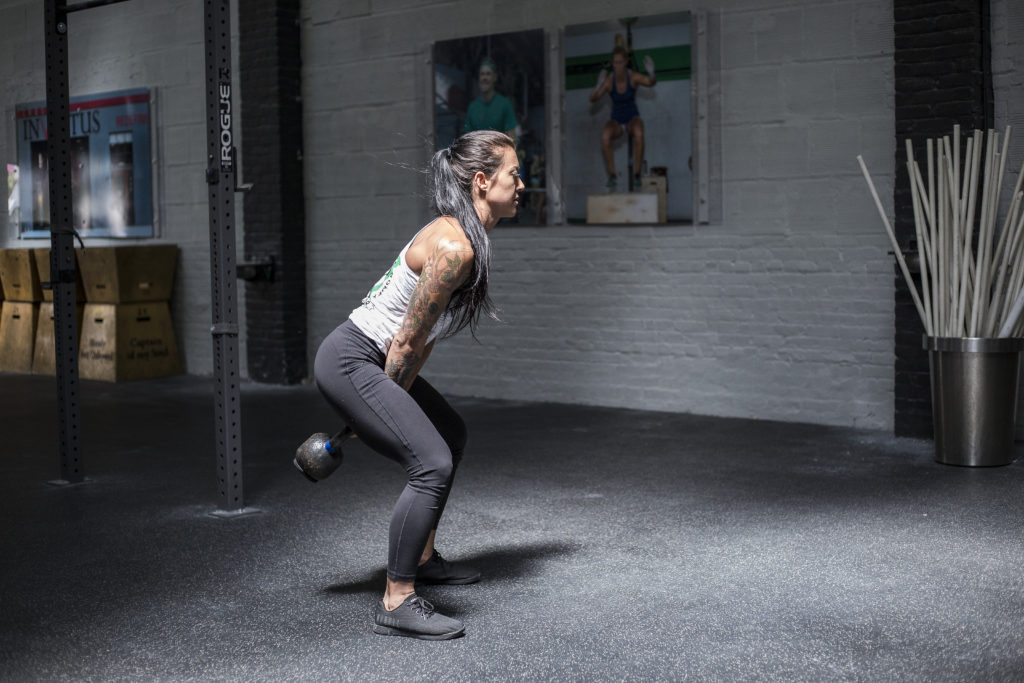 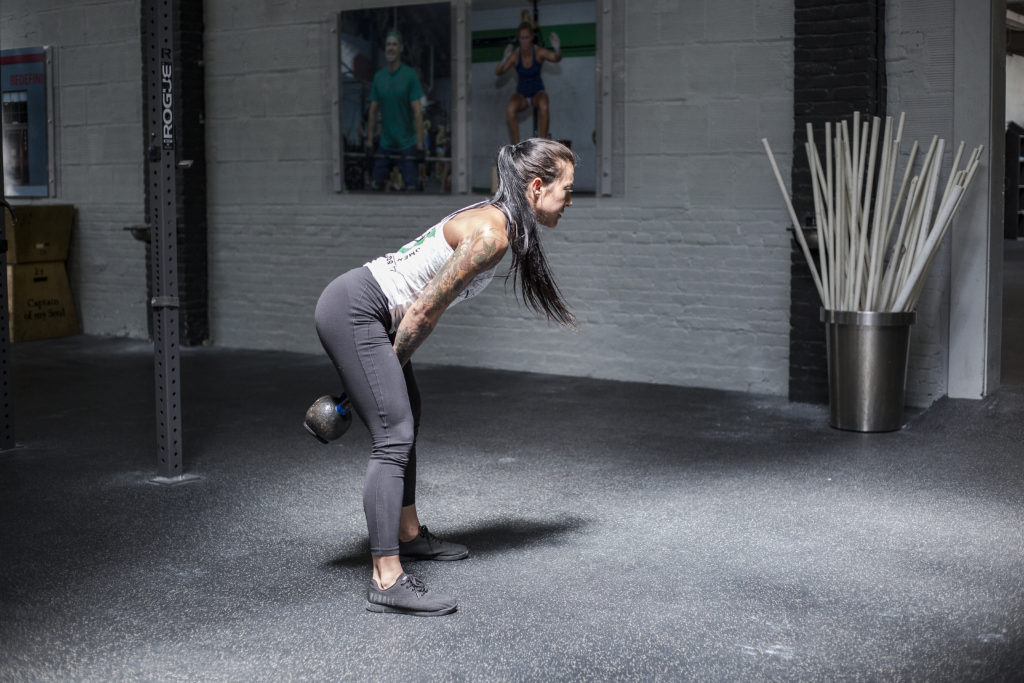 Here is a comparison of end range pelvic tilt in an athlete that is performing the kettlebell swing as a squat (above) versus a hinge (below).

To properly hinge and promote engagement of the hamstrings, an athlete must understand internal rotation torque. Internal, or medial, rotation of the femurs into the hips is what allows the hips to hinge freely and still create powerful forces of flexion. This pattern of rotation can be practiced and learned by standing with feet directly below the body and without allowing the feet to actually move, thinking of squeezing the floor together with your feet or creating a screw like motion with the toes moving towards center of the body. On the other hand, the external forces of a squat can be activated with the opposite action of “twisting” the toes outward or “spreading the floor,” again, without any actual change in the position of the feet.

External and internal forces are both essential to optimal human function, but will be dependent on the type of movement. As a hinging pattern, the kettlebell swing must be exercised as internal rotation to move best and safely. The external forces of a squat inhibit the athlete from achieving the proper range of motion and for that reason; the low back will be the primary flexor/extensor for the swing. The internal rotation used in a hinge will allow the athlete to freely move the hips and therefore use the hamstrings and glutes to achieve rapid hip extension.

The human body is made to move in certain patterns and each joint and muscle serves a primary purpose for which it exists. Understanding the roles and responsibilities that play within our own body and the forces that rule them is vital not only to optimal performance but a pain-free life experience. Stop accepting the false claims that certain movements are inherently painful. Our bodies are designed to throw, push, pull, jump, squat, hinge, pick things up, set things down and move. Your body is capable and ready to adapt to anything if you are patient enough to learn its every function.

The Case Against NSAIDs