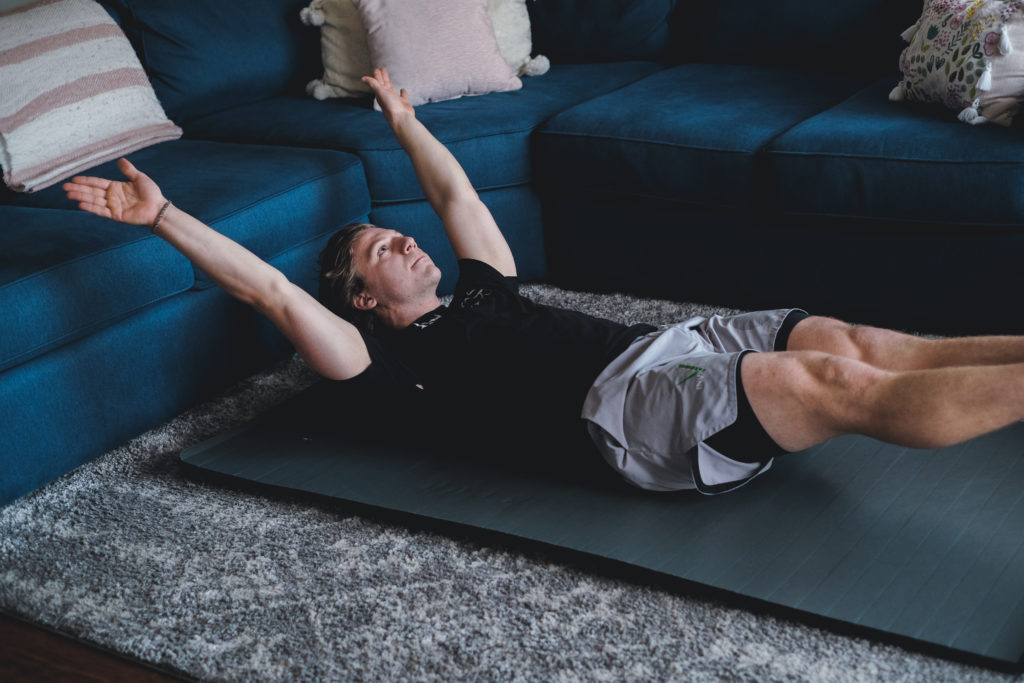 I had someone in my gymnastics group asking about sit-ups, lower back health, and ab strength. I can’t say that I have the best answer, as unfortunately I think this is a fairly complicated issue and I would probably advise anybody who is experiencing lower back issues to talk to a physical therapist, physio or chiropractor instead of me (a gymnastics coach). But, I can lend you my thoughts from a gymnast’s perspective.

Since I have taught many young kids for so long, I have seen trends that have guided me toward different exercises to help them build the appropriate amount of strength to be able to “control” the shape of their lower back – at will – when necessary.

When young kids with weak abdominal strength are attempting to sit up, they have a tendency to allow their lower back to round and use their hip flexors to lift their upper body. This is not good. The issue with this is that the psoas attaches at the femur and the lumbar, and with the activation of this and the other hip flexors, they try to lift the upper body with a seemingly “limp” upper body. If this trend continues, the abs do not develop with balance to the hip flexors and can cause hyperextension of the lower back and a continual pull on the lumbar toward the front of the body causing an anterior tilt of the pelvis. Unfortunately, this is quite common with gymnasts and leads to a likelihood of lower back problems later in life.

The goal (from my perspective) is to train and develop the abdominals to create a round lower back through strength, not just positioning. Placing a person in a hollow body hold position can create too much load on these weak abs, as placing yourself completely horizontal is actually quite aggressive. Even in the hollow body position, an athlete will default to the hip flexors (thus psoas) and lose this rounded and supported lower back position that we are looking to create. Holding this position longer than they can actually maintain with their ab strength may be working against the goal of strengthening the abs by instead strengthening the hip flexors. Watch: To Hollow or Not to Hollow for more thoughts about this position, especially how it relates to CrossFit Gymnastics.

Sit-ups are similar. Creating a hinge in the hip position prior to sitting up is already shortening the hip flexors, and even though that may mean that you are using them less, they are still contracting to perform the sit-up. The question that I would ask is if the sit-up is working the abs or the hip flexors more? The answer is important depending on the person performing the movement.

The approach that I have taken with my youngest athletes is to place them in positions that allow the hip flexors to remain as relaxed as possible whilst engaging the lower abs. A good example of of this is a tuck rock, as the goal is to round the lower back, keep the knees close to the chest, and by doing this the leg weight is not much of a load on the hip flexors, and the lower abs are able to stay contracted to maintain a smooth “rock”. Clearly this is more of an isometric movement, but it does the job for the lower abs.

Scaling the hollow position can (and probably should be) done by placing an athlete at an incline, not horizontal on the floor. I do not see this done often, if ever, as people are so quick to jump to the hollow on the floor as an exercise. I would say that it’s pretty safe to assume that a novice athlete or maybe even more experienced athletes should be learning to contract the lower abs without activating the hip flexors. Building strength in the lower abs and obliques will effectively support the balance between them and the hip flexors, allowing an athlete to progressively build strength in both muscle groups with less chance of injury.

Travis has been coaching gymnastics at all levels for over 22 years. He has worked with competitive and recreational athletes of all ages. His unique and thorough coaching techniques give athletes the tools to excel in their efficiency and form in all gymnastics movements you will find in your workouts.

Since creating Invictus Gymnastics, he has helped hundreds of athletes throughout the world improve their technique, efficiency and volume with their bodyweight strength. Do you want Travis to be your coach? You can join his online community – Invictus Gymnastics – at any time! The program is made for athletes of all levels who want to spend focused time each week dialing in their gymnastics. Each week, your program will include three 20-minute sessions – which will include access to 3 levels of training. See a sample day of programming here!

The Core: Abs, Spine & Everything Fine

A Few of My Favorite Non-Traditional Core Exercises

Well well well…now this makes sense as to why Travis’ core workouts that he created are sooooo much more difficult/effective on the abs than just doing the traditional sit ups (etc.). Going for round 3 of his core workouts!!