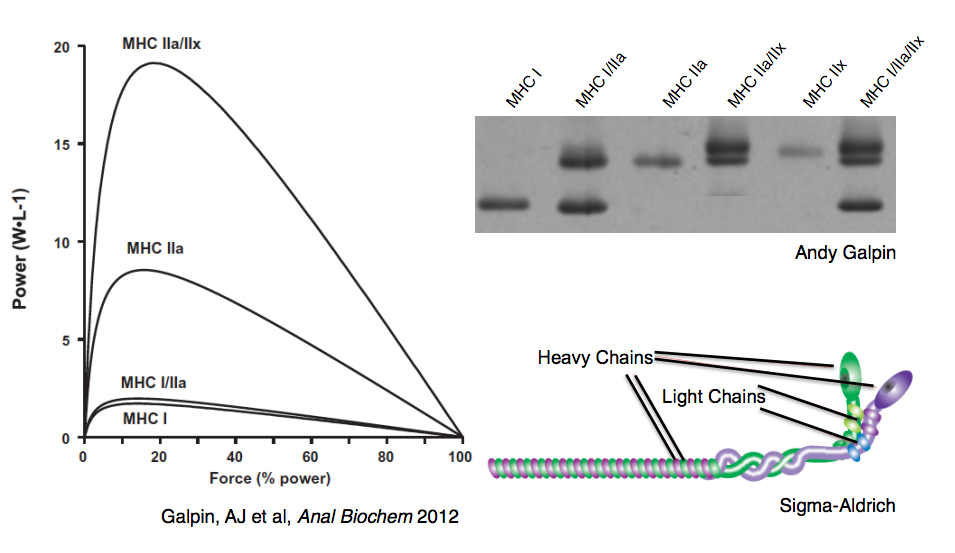 In Part 1 of this post, we learned how myosin drives the molecular processes of muscle contraction. Now to expand on that knowledge to understand the differences between fast and slow twitch muscle fibers at the molecular level!

What are myosin heavy chains?

The myosin protein complex which forms the molecular motor that drives muscle contraction is composed of four component proteins: two heavy chains and two light chains, twisted around each other. The myosin heavy chains (MHCs) are responsible for the power stroke movement that breaks down ATP converting it into the mechanical energy that pulls the actin filament across the myosin filament (as explained in Part 1). There are three types (known as isoforms) of MHCs in humans: I, IIa and IIx. Each one has a different speed at which they process ATP to perform their work. MHC IIx is the fastest while MHC I is the slowest.

How do MHCs relate to muscle fiber type?

The contractile speed of the MHCs directly contributes to the speed and power for which the total muscle tissue is capable of exerting force. Thus, the fast MHCs (IIa and IIx) are found in fast-twitch fibers while the slower MHC I is found in slow-twitch fibers. Muscle fibers ultimately have a range of different combinations of MHCs found in each individual fiber. Some fibers are pure MHC I, pure MHC IIa or very rarely pure MHC IIx. Other fibers have a mixture of MHCs and are known as hybrids- either containing I and IIa (I/IIa), IIa/IIx or all 3 (I/IIa/IIx). Furthermore, human muscles have all fiber types present- a heterogeneous mixture where fibers right next to each other can be completely different types. Thus the muscle of an individual will contain a certain percentage (i.e. composition) of each fiber type, which will vary between different people.

How do fiber types respond to training?

While our genetics can influence our propensity to have more slow-twitch or fast-twitch fibers, fiber type is also heavily dependent on the training, lifestyle, health and age of an individual. Sedentary people typically have a higher percentage of hybrid fibers (>20%) while highly trained individuals will exhibit a combination of pure MHC I and pure MHC IIa fibers and very few hybrids. With physical training, the fibers will differentiate to better meet the demands that are placed on them.

The type of training also influences the overall fiber type composition. Endurance athletes such as marathoners have a much higher percentage of slow-twitch (MHC I) while power/speed athletes such as Olympic weightlifters and sprinters have a greater percentage of fast-twitch (MHC IIa). The slow-twitch fibers typically exhibit enhanced metabolic properties such as a higher concentration of mitochondria (the energy-producing factories inside the cell), which better serves the needs of an endurance athlete. The higher contractile speed of the fast-twitch fibers ultimately serves the power athlete in generating maximum force in a short amount of time, in addition to higher glycogen reserves for fueling high intensity endeavors in short periods of time.

Athletes who compete in sports that require both power and endurance (such as Crossfit and MMA) will likely have more even percentages of slow-twitch and fast-twitch fibers. However, whether or not their fiber types exhibit the same segregation of metabolic properties as in more specialized athletes remains unknown.

How do you determine the fiber type of an athlete at the molecular level?

At Dr. Andy Galpin’s Biochemistry & Molecular Exercise Physiology Lab, we have the ability to determine the precise fiber type composition of an individual’s muscle. After taking a muscle biopsy – removing a small pea-sized sample from the vastus lateralis (muscle on the side of your quad), we can separate out the individual fibers and analyze them at the single fiber level.

Because the different MHCs have different molecular weights (size of protein), we can separate them by their size. After dissolving the fiber into solution, we can load each sample into a gel and apply an electrical current through the gel that causes the proteins to move. The smaller proteins will move more quickly than the bigger proteins, so the end result will leave them at different locations in the gel.

In the figure above, you can see different combinations of bands that each represent the individual MHCs. The MHC I forms a lower band as it is smaller in size than the MHC IIa and IIx. If both bands are present, the fiber is a hybrid- or if all 3 are present, it is a triple hybrid. By identifying the type of roughly one hundred fibers from an individual, we can determine what percentage of each type your muscle contains. For example, you might be 50% MHC I, 40% MHC IIa, 5% MHC I/IIa and 5% MHC IIa/IIx. Or you could be any number of different fiber type compositions, which could indeed change in 5-10 years depending on what you’re doing.

Dr. Galpin and I are conducting research on the fiber type properties of athletes and how they are affected by training. In addition to MHC, there are many other proteins that exhibit differences in slow vs fast-twitch fibers and have important functions related to metabolism. Stay tuned for further postings on this topic. It’s a long road ahead of us towards results, but is very exciting science to be working on!

The Rise in Opioid Use And The Safer Illegal Alternative

How To Interpret Your Body Fat Test