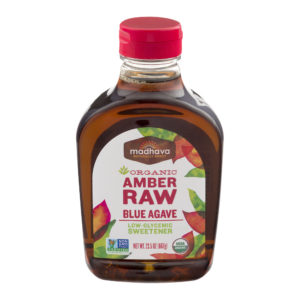 With the increasing popularity of the Paleo Diet, many people are turning to agave nectar as a sweetener in many of their favorite recipes. It’s understandable to see why people would think of using agave nectar as it doesn’t add any other flavors like many sweeteners and it tastes sweeter than sugar. Unfortunately, it’s not Paleo and it’s definitely not good for you. So imagine my surprise when I was walking through the aisles of my local Costco only to be confronted by a gigantic pallet of agave nectar. The labeling advertised it as a “low glycemic organic sweetener” and it must have worked because it was selling like there’s no tomorrow. Today, we’ll discuss some of the reasons why you should reconsider indulging in this sweet poison.

Don’t be fooled by words like “organic” and “natural” on the labeling. Substituting your usual sugar with agave nectar is far from making a healthier choice. A few weeks ago George noted that despite it’s appealing name, agave nectar is a highly processed and refined product. The fact that it’s manufacturing process is patented should probably be a big clue that it’s not as “natural” as they would like you to think. Let’s keep in mind the premise of the Paleo Diet, consumption of refined carbohydrates was an impossibility for Paleolithic humans.

High-fructose corn syrup is the primary sweetener that you find in most sodas, “sports” drinks, and many other foods, and it contains about 55% fructose and 45% glucose. Agave nectar, on the other hand, contains about 90-97% fructose and 3-10% glucose. I guess marketers decided that agave nectar sounded better than “really freakin’ high fructose syrup.” Fructose is an isomer of glucose, meaning that both have the same chemical formula but different molecular arrangements. Because of their different molecular arrangements, fructose is not digested in the same fashion as glucose. This is problematic because fructose tends to promote a process known as lipogenesis (lipo- meaning “fat” and -genesis meaning “creation of”), in other words fructose consumption results in your body manufacturing fatty acids from carbohydrates. Far from ideal when looking good in a swimsuit is your goal.

According to a study published in the American Journal of Clinical Nutrition, fructose consumption has been directly linked to obesity. Instead of being digested in the small intestine, fructose passes unchanged into the portal vein where it is directed to the liver to be processed. Once in the liver, fructose is broken down into components that readily form triglycerides. Subjects that were fed a diet that contained 17% fructose experienced a massive 32% increase in plasma triglycerides. High triglycerides are associated with metabolic syndrome which is indicative of increased risk for heart disease, diabetes, and stroke.

In conclusion, you should strive to eliminate all processed and refined carbohydrates from your diet. Agave nectar, table sugar, high-fructose corn syrup, and even artificial sweeteners should be avoided. You have to make an effort to read labels as refined sugar is in everything from sweet foods like sodas and ice cream to savory foods like deli meats and sauces. Of course, this is not to say that there aren’t any good uses for the agave plant. Fermented agave, for example, is a favored drink amongst many CrossFitters, but that’s a discussion for another day.

What You Should Know About Artificial Sweeteners

How to Interpret Your Body Fat Test

“Really freakin’ high-fructose corn syrup.” I like the sound of that…is it patented yet? Steve, while we want you to be aware of some of the adverse affects sweeteners and such can have on you, the last thing we want you to do is develop any anxiety over it and start thinking that any bit of it that passes your lips will derail your diet. If you really can’t get by without a little sugar fix for your beverage, a little bit of sugar or honey won’t kill you. We’re just trying to dispel the notion that because this may… Read more »

Okay – Agave is bad. HFCS is bad. Table sugar is bad. Honey is bad. Splenda is bad. I get it. Sweetners are bad.

That said, what is the lesser of all those evils. We will eat some suger-type product in the house. 99.99% of all people will eat sweetener every now and then.

Knowing that I might fall over dead with that one big spoon of brown sugar, What’s the ‘best’ choice of the available options?

Calvin, I hear there is a difference between Madhava Agave nectar and Blue Agave nectar. If so could you please elaborate?

Cynthia thanks for the love 🙂

Cynthia…if you dip your honeypot ant into agave and then roll in flax seeds, that might be to much deliciousness.

If I mix my agave nectar with flax seeds, would that be okay?

Actually, a patient paleo gatherer could also have found a nectar bearing flower, e.g., honeysuckle, and gotten concentrated sweets that way, but the overall quantity probably would have been much less due to the minute amount in each flower….and then of course there is the mother lode for paleo/aboriginal eaters …

Great article Calvin. I knew high fructose corn syrup was bad, but i didnt realize it was THAT bad. No more HFCS for me on my cheat days. I’m sticking to barley, hops, and milk shakes. By the way, the 666g thing is really creepy too.

Plus agave is a New World plant and couldn’t be paleo.

The only sweetener that could be paleo is raw honey. And it would not have been readily available. The bees have stingers to protect their honey supply.

I just put up my definition of the paleo diet.

Good article Calvin. I am going to forward this to my Aunt. I was over at her house for dinner the other night when she offered me some fresh brewed green tea. Along with that tea she brought out her trusty bottle of Agave Nectar and began to rave about its health qualities… guess she needs some quality research as opposed to quality advertising. Anyway, wish I was back at Invictus doing this WOD with you all. I’m currently out to sea and Crossfit PREBLE isn’t exactly up to the standards of Invictus. Looks like I will be subbing DU’s… Read more »