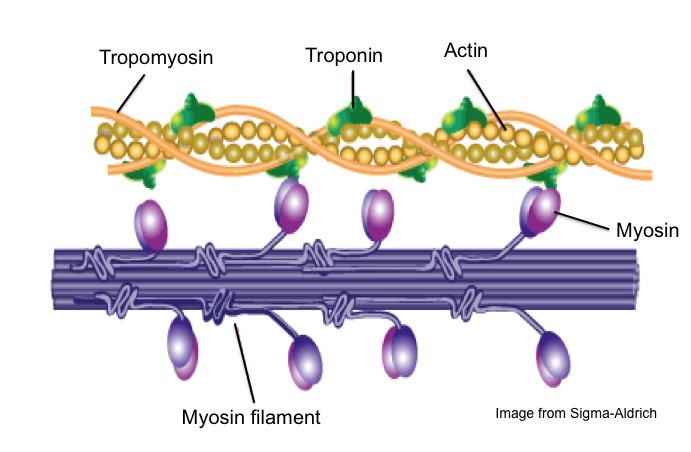 Have you ever wondered what powers your muscles at the molecular level and is the source of all voluntary movement and force production in your body? A really cool protein known as myosin ultimately drives all of our power – here is a basic description on how it is thought to work!

Myosin is one of the most fascinating molecules in our bodies. It’s the protein complex that’s principally responsible for muscle contraction. Myosin is a “molecular motor” – it uses a compound known as adenosine tri-phosphate (ATP, our cellular energy currency derived from glucose) as its fuel, converting it into mechanical energy to drive every voluntary movement that we make as organisms. So in other words, it’s an athletic protein that does a lot of work, all day.

How does myosin drive muscle contraction?

Many myosin complexes band together to form a long collective unit known as a myosin filament. Each myosin works by stepping its way across a protein known as actin – another long filament that essentially supplies a runway for myosin to move along. The two heads of the myosin complex (known as Myosin Heavy Chains or MHCs) perform an awesome microscopic functional movement known as a power stroke that is driven by ATP. The MHCs bind to actin and drag it along so that the actin filament slides past the myosin filament. Think of this movement almost like the efforts of several CrossFit Games team athletes (each one representing a myosin molecule on a filament “team”) working together in unison to slide a heavy sled across a surface. The process of many pairs of myosin and actin filaments sliding opposite to one another occurs within a larger unit of a muscle fiber known as a sarcomere to which the actin filaments are anchored. This mechanical process involves a repetitive shortening and lengthening of the sarcomere, rather like an elastic band. Many sarcomeres shortening and lengthening together in unison produce the net effect of muscle contraction.

How do your nerves regulate skeletal muscle contraction?

Your skeletal muscles differ from the cardiac and smooth muscles in your body in that you have the ability to actively control their movement (i.e. voluntary contraction). Nerves are connected to your individual skeletal muscle fibers and regulate contraction through electrical impulses that ultimately generate the release of calcium within your sarcomeres. Calcium has a key role in controlling whether your muscle fibers are in a relaxed or a contracted state. It functions through regulating the opposing actions of two important signaling proteins known as tropomyosin and troponin. Signaling proteins are the master switches of molecular processes within our bodies, ultimately determining whether a process such as muscle contraction is turned on or off. Tropomyosin is the “stop” signal for contraction, i.e. it turns on a relaxed state. It works by competing with myosin, binding to the same sites on actin where myosin binds, effectively blocking myosin from performing its work. Troponin combats this effect and processes the “go” signal for muscle contraction. It works when turned on by calcium to relieve the binding of tropomyosin to actin, thus allowing myosin to bind and perform the power stroke.

If you’re curious to see this process illustrated in action, here is a short video I found online that animates the molecular mechanisms of muscle contraction. Unfortunately it comes along with a dorky science voice and uses handwriting instead of weightlifting as an example of contraction, but it’s very well done in helping to understand this process from a visual perspective:

Stay tuned for Part 2 on myosin function where I’ll attempt to break down how MHCs relate to slow twitch vs fast twitch muscle properties. And next time you’re in the gym performing a power clean, think of all those tiny myosin molecules in your body performing millions of microscopic power strokes that allow you to accomplish that task!