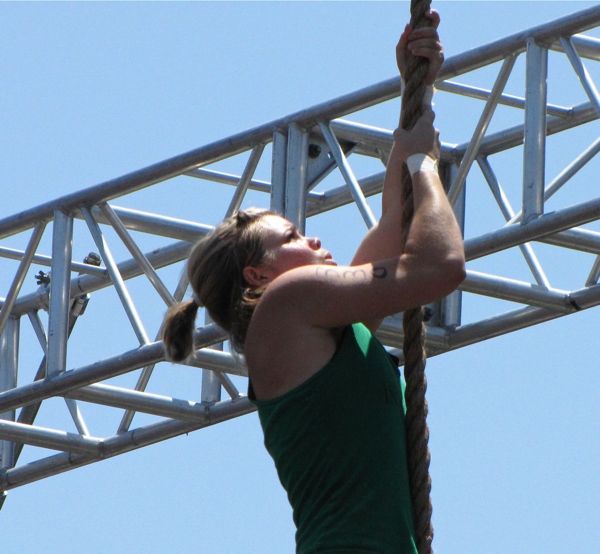 Mental Toughness
Written by Sage Burgener (and her brother, Casey)

I’m not going to say much in this post, I’m going to let my brother’s letter do all the talking (he doesn’t know I’m posting this. He’ll probably be upset. I’m ok with that).

But I will say that last year when I was training for the CrossFit Games I was struggling with feeling like I was mentally weak. I saw all these amazing athletes around me that, during the hardest of workouts, never had one look of pain or struggle across their face. They appeared to be immune to the torture. I never felt that way when I was working out. I feared workouts. I feared getting under heavy weights. I feared the pain that was to be inflicted upon me via thrusters. Because I feared so often, I was certain that I had some rare, possibly fatal, medical condition.

My brother Casey got his degree in physics,which basically means he knows everything. Therefore, I burden him with all of my questions about life, liberty and the pursuit of chocolate. I wrote him an email asking him, as an Olympic athlete, what he thought it meant to be “mentally tough.” The letter he wrote to me seriously changed my life. I am not saying that I am mentally tough by any means, but I at least have a better understanding of how to go about becoming a better person each day. I read this letter almost everyday and it has gotten me through many times of self doubt. It is long, but I promise you won’t be disappointed if you read the whole thing…especially if you feel like you may have the same medical condition that I had.

“First, you need to decide what you are going to do. This may sound like a simple step, or like you’ve already done it, but let me tell you, it’s the hardest, and most important step in being tough. Once you make the commitment to do something, then almost nothing can stop you. This is why it took me so long to decide to come back to lifting. I knew once I committed, nothing was going to stop me from achieving my goals, no matter what the costs, or how much workouts sucked, or how badly my body felt.

So with you, you have to really really really decide that the Crossfit Games are what you want to do. Once you decide this, the process will be easy. When you commit, it’s easier to block weaknesses out of your head, and workouts will seem like steps forward to your goal, rather than burdens. When you commit, I really believe you can do anything. Really take this decision seriously though, because if you only “half” decide you want to do it, or do it for “fun”, then you shouldn’t even worry about Regionals, and just train whenever you want to and not care about how a workout goes. If you decide to do it for “fun”, then you can’t be bothered by any performance at Regionals or any meet, because you decided not to take it seriously.

Now, either decision in your case wouldn’t be a bad one (in my opinion), just make sure you stick to your choice wholeheartedly. I read a great book recently, and it talked about how when someone commits to something, they should do it all the way, and be satisfied with whatever the outcome. So if you commit to the Games and start training as hard as you can, you have to be comfortable with the possibility that you may succeed tremendously, or fail miserably (in terms of winning and losing). The important thing is that you committed, and you did everything you could to make it happen. Trust me, if you do that, the thoughts about winning and losing seem to almost disappear. It’s about overcoming yourself, and pushing yourself to become greater than you were the day before, that’s what really matters.

I’m reading a great book right now, and while I don’t agree with a lot of points (it’s an atheist book that talks a lot about being selfish), it has a lot of great points about pushing yourself to your highest potential. He talks mostly about pushing yourself in terms of knowledge and creativity, but I think a lot of it applies to life as well. Basically, every decision you make should be a conscious one in becoming a better person. Every decision you make has meaning to it, and you pursue a better self constantly. The friends you choose, the people you surround yourself with, the food you eat, the books you read, the television you watch, how much sleep you get, everything should be a stern decision that makes you go in a better direction than the one you’re headed towards. Surround yourself with people who want to make themselves better, and who in turn push you to make you better.

One of the big points in the book is the “will to power”, which basically means that when you conquer yourself and get rid of everything that has once held you back, you can “will” yourself to do anything. This is really difficult to achieve, but think about how much it could help if you just strive for it. If every time you have a bad day, or feel a negative emotion, or have a bad workout, you “will” yourself out of the poor mindset, refusing to let it beat you down, and just continue your journey in becoming the best you can be. I’m not saying you can be like this every day, but the important issue is that you are truly DOING it. You’ll slip up, you’ll still have bad days, but as long as you’re moving forward, and not letting yourself continue to slip, then there’s nothing you can’t do.

Mental toughness for me has always been hard to explain. I’ve never really thought that I was mentally tough, but the reason why I was successful in meets is because I KNEW what I was capable of. I can’t tell you how many times I’ve wanted to quit lifting, or give up, but I didn’t because I committed to what I was doing. That was one thing Mom and Dad taught us that is invaluable; to never quit. When you commit to whatever it is in life, make sure it’s a positive direction, and just don’t quit. Fight with all of your being to achieve what you set out to, and know that you’re becoming a better person because of it. So even if you have a bad day, or hate Crossfit, or lifting, or school, or whatever it is, you can still have the confidence that what you’re doing is making you better in some way, and that is a beautiful feeling.

A lot of this may not seem like it pertains to mental toughness, but when you think about it, what does that mean anyway? Toughness means you fight through pain, or discomfort, and continue striving forward. But why would you do this in the first place? It seems against our nature to put ourselves through pain and discomfort, so why bother? The answer is this; because we are committed to making ourselves better, committed to be something greater than what we currently are. Think about the people who are tough, the one thing they have in common is that they’ve committed to something. Whether it’s becoming healthy, smarter, a better parent, or a Crossfit Games champion, they decided it was what they wanted, and they didn’t care how hard it became, or what obstacles showed up, nothing was going to stop them from following through with the decision they made.

The last thing I’m going to say is that while all of this seems draining, and challenging, it also has to be fun. Commitments can be joyous, they don’t have to be discouraging and hard all the time. I committed to being a husband, that doesn’t mean it’s a burden. It’s challenging, and tough at times, but I love every minute of it because I DECIDED that it was what I wanted to be. So take comfort in knowing that no matter what decision you make, or what direction you want to pursue, it’s going to be amazing because it’s your path, your decision, your direction. There’s beauty in the successes and the failures of your journey. Soak up every ounce of it and know that you’re becoming a better human being. “

What an amazing way of words. It’s what I needed to read at this moment for me. To be commited no matter what the outcome will be and become a better human being because of my path and commitment to my journey. Thank you.

The letter from your brother was so touching and
on point. Thank you for sharing.

Staying mentally tough is one of the most important aspects of anyone’s life and it is a half way to success.

Being mentally weak is really tough even your body is fully prepared. You might be really thankful that your brother was always there to help you. Great article you have written.

this is freaking amazing. Just gave me so much clarity, and an aspect of wellbeing that id never even considered.

Thank you for sharing! I love how the clarity and want to share this with others, with your permission?

Awesome! Thanks for sharing Sage and thanks for the words of wisdom Casey!

I only came across this just today – Beautifully written letter. Commit.

Great read. I could be wrong, but it sounded like he was reading the book Atlas Shrugged.

Great post, very inspirational regarding our commitment in life. Great timing for me to read this!

Great post! Thanks for sharing you and your brother to us 🙂

Does anyone know what books Casey was reading? They seem like interesting reads.

Awesome article! This is the key “First, you need to decide what you are going to do. This may sound like a simple step, or like you’ve already done it, but let me tell you, it’s the hardest, and most important step in being tough.”

Thank you for shaing!

Great post! Thanks for reminding me that committing to something pushes you through the tough times. Success in life is about the decisions you make. Every decision you make has meaning…your food choices, who you surround yourself with, whether or not to give you all in a WOD.

Great article! I love posts like this. Could anyone please list the books that Casey Burgener was reading that he mentioned? They seem like very interesting reads.

This is a very inspiring article Sage. Great motivation that I sometimes truly need when I feel week.

Sage? Thanks for sharing your brother’s message to you, with us! AWESOME read & very INSIGHTFUL!