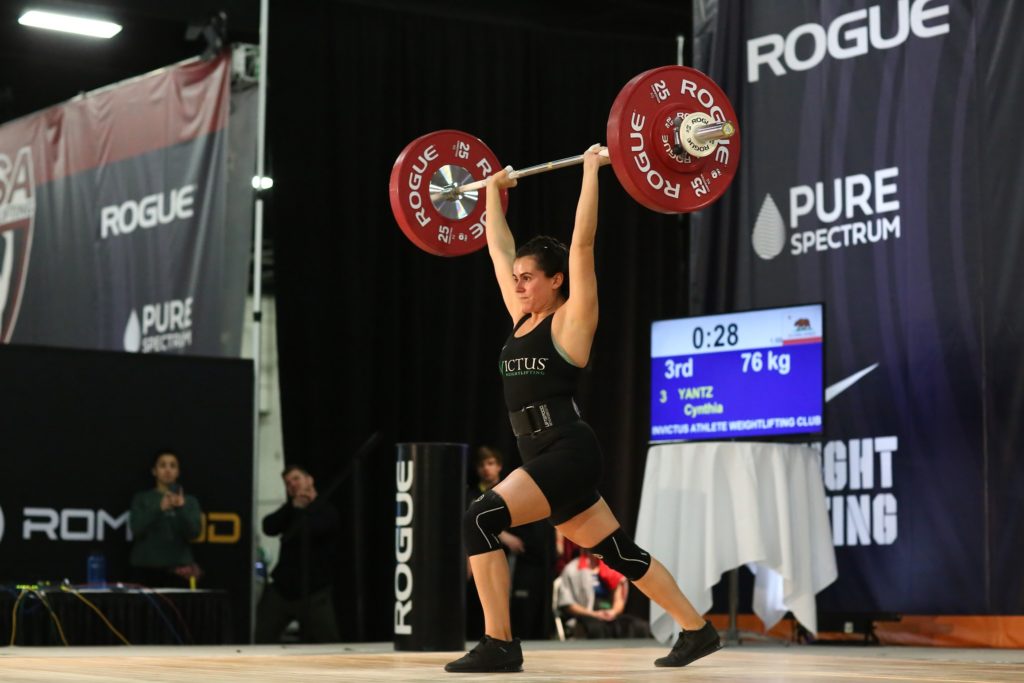 A Lifter, Her Barbell & Her Coach
Written by Invictus Member Cynthia Yantz with Commentary from Coach Ricky Moore

As a kid I never played many sports nor was I particularly “good” at any sport. Everything I started was either short-lived or I quit because I just wasn’t competitive. After stopping all recreational and school sports and hanging up my cleats for good, my sister wore me down and dragged me to my first CrossFit class when I was a senior in high school. At first, I didn’t want to go. I believed in the often too common female theory that if I touched a barbell I would be “too big” and/or “too bulky.” But to my surprise, I was instantly hooked. I liked the variety that CrossFit had to offer and how everyday was something new, so I continued CrossFit throughout my college career.

I eventually realized that while I enjoyed CrossFit, my favorite part of class always surrounded the barbell. I never cared much for the endurance workouts and struggled a lot with gymnastic movements. Yet any time lifting a barbell was programmed, I found myself to be excited for the workout.

After a year and a half of attending Olympic lifting classes I suffered a rib injury that took me out of lifting and CrossFit for nearly two months. I wasn’t allowed to lift or do any intense exercise, which resulted in me becoming “best friends” with the bikes in the gym. I lost 13 pounds and feared that I was weaker and that I had lost all the strength I had worked so hard to build. But when I returned to lifting after my long break, I was surprised to see that I was still able to hit my previous numbers. Once I came back to “Oly” classes (at my new lower weight class) I was given an ultimatum by Coach Ricky: either attend his weekly running classes or compete in my first Olympic lifting meet. Knowing how I felt about running, he already knew what my answer would be. And despite all my fears and hesitations, I officially signed up for my first Olympic weightlifting meet.

Ricky: There were a couple of things that I saw that made me want to push Cynthia to compete in weightlifting is that one day she PR’d her back squat at 240lbs. This was a big deal because I knew she was and still is very consistent in Oly class and that squat is a big milestone for people. I knew that squat was good – even in our Competition class – for both males and females. With that leg strength I knew she could have some fun competing.

And the rest, as they say, is history. I did better than I could have imagined at my first ever local meet, which qualified me for the National University and Under 25 Championships. And here I am almost half a year later, gearing up for American Open Series 3. For the first time in my life, I found a sport that I am not only “good” at, but something that I am competitive in.

While strength is definitely a factor in weightlifting, I’ve learned (and am still learning everyday) that what makes the difference between a good and bad lifting day, is what is between the ears. Although I still struggle with being confident in every lift, I have more confidence now than I ever have in my life.

Ricky: I am most proud of her confidence and her willingness to push herself mentally and physically.  Weightlifting is a very mentally challenging sport as much as it is physical. She would agree with me that before weightlifting she was not mentally tough in things she would do. Through weightlifting she has become more confident in everything she does. Even if it is something that she doesn’t like or is not good at, she will learn to conquer it instead of running away from it.

Weightlifting requires a certain mental strength and toughness that can either make or break your lift. The barbell doesn’t care if you fail a lift, it’s completely indifferent. On the platform, it’s just the two of you. Everything else simply fades away. And that feeling, that battle, it’s exactly what I needed in my life.

Ricky: Others can learn from Cynthia that you can change your mental and physical attitudes to just about anything. If you work on every aspect of yourself from a mental and physical standpoint you will reach your goals and better yourself and others around you. She is a true example of the Master of her fate, Captain of her soul.

Without Invictus and especially Ricky (don’t tell him I said this 😉 jk) I wouldn’t be where I am today. Without Ricky I would have never gotten involved in competitive weightlifting, it’s as simple as that. He was the first person who ever believed in me and what I could do in weightlifting. He has always believed in me more than I believe in myself, and I think just knowing that makes me push myself even more. He’s not only an amazing coach but an amazing person and I’m so grateful for him, he’s changed my life for the better.