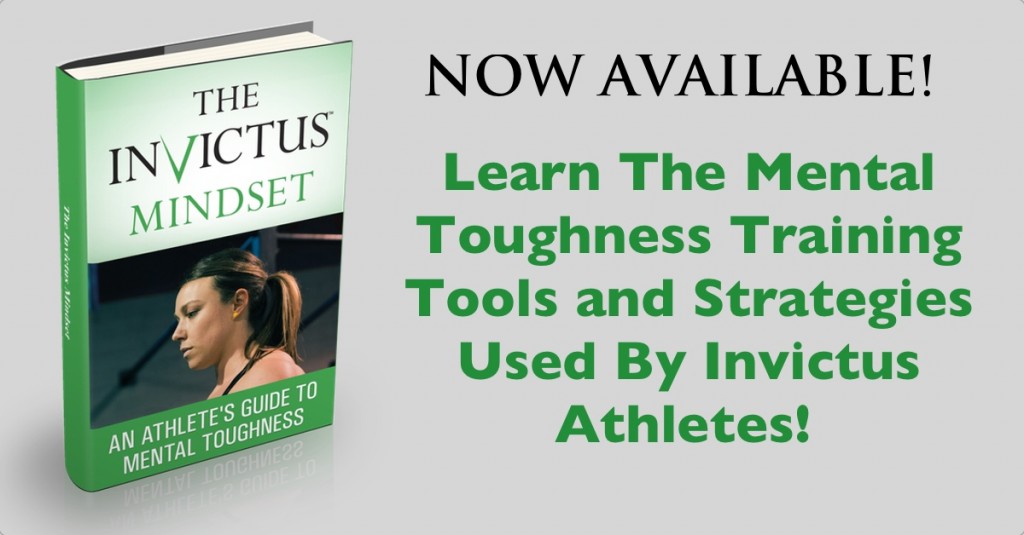 Most athletes invest a great deal of their time, effort, and resources in developing their physical body. Precise nutrition plans, customized training programs, specialty skill coaches, training camps, and continuous bodywork are just some of the common areas where athletes will spend a large portion of their resources. However, how much time do you put towards developing your mindset? Your mind is arguably the most powerful tool in your arsenal as an athlete yet so many leave this area untouched in their training and arrive on game day psychologically unprepared. We have been extremely fortunate at Invictus to have the opportunity to coach clients ranging from the complete beginner to world-class performers. The common denominator among our most successful clients and athletes is their unconquerable mindset.

What Is The Invictus Mindset?

“An individual’s outlook and resilience during the worst of times is the difference between those who succeed and those who succumb. The Invictus mindset is a commitment to maintaining control of your destiny without regard for the obstacles and hardships that are laid on your path.” – C.J. Martin

We’ve pulled together our decades of combined coaching experience to create our first ever eBook, “The Invictus Mindset: An Athlete’s Guide To Mental Toughness.” Our team has created this book for anyone who wants to improve their mental toughness and develop an unconquerable mindset. In this book, we provide you with some basic theory and philosophy regarding mental toughness, as well as ways to practically implement these ideas into your training. If you want to improve your performance and sharpen your mental game, this book is for you.

Inside you’ll find over 130-pages of wisdom from some of our expert coaches and competitive athletes on how to prepare yourself for training and competition. You’ll learn about the five pillars of mental toughness and some simple techniques you can implement into your training right away to improve your mental game.

*Essays on Mental Toughness from World-Class Coaches and Athletes.

We have included a collection of essays written by Invictus coaches and athletes that expound upon the unconquerable mindset that has become the signature of the Invictus athlete. You’ll learn what goes through their mind on the arena floor and the training tools they used to get there.

Heidi’s visualizations have been our secret weapon in preparing athletes for success in training and competition. Now you’ll get to experience Heidi’s guided visualization any time you would like with the downloadable audio we’ve included.

*Set Goals You Will Achieve.

*LAUNCH DAY BONUS: Purchase a copy of the Invictus Mindset in the first 48 hours of launch and you’ll be automatically entered to win a ticket to an Invictus Athletes’ Camp! The bonus period ends at 6:00 a.m. PST on Sunday, February 22nd. We’ll announce the lucky winners on the blog next week!

Click here to order your copy of the “The Invictus Mindset“.

Meet The Authors and Contributors

C.J. does not measure success by podium finishes, but rather by the athletic and personal growth of the athletes with whom he’s blessed to coach. Competitive success is a natural result of athletes expressing their full potential, but the ultimate reward for both athlete and coach is the satisfaction of knowing that they became the best they could be.

Heidi is known simply as the Invictus “Healer.” Heidi is an acupuncturist by trade, but her treatment of athletes ranges from sports psychology to pre-event massage. Words can’t describe the impact that she has had on Invictus athletes’ performances at the CrossFit Games. She is Invictus’ secret weapon.

Heidi has studied with and been mentored by some of the most renowned sports psychologists in the world, and has used that training to help athletes and members of U.S. Special Forces find their clear sense of purpose and motivation to tap into their greatest potential. She also understands the mind of an athlete from personal experience. Heidi finished 5th in the Military Eco Challenge in Alaska, was a runner up for the Navy’s Top Military Athlete in 2002 and held 14 swim records at the United States Naval Academy, not to mention hiking to Everest base camp, swimming an English Channel relay and trekking through the Himalayas of Bhutan for fun.

Calvin is one of the senior coaches at Invictus Fitness, a Level 2 CrossFit instructor, USAW Sport Performance Coach, and has completed a broad range of specialty certifications. He has coached Invictus athletes to 12 national championships in the sport of powerlifting and is the creator of the Strength Development program at Invictus Fitness. As a competitive powerlifter, he has won two national titles in the 181-pound raw weight class and formerly held 2 national records.

Calvin has a passion for the application of science to the study of fitness and utilizes his knowledge of biomechanics, performance psychology, and nutrition to enhance athletic performance. He is an experienced professional having worked in the fitness industry since 2006 and has coached with Invictus since it was founded in 2009.

Nichole is one of the senior coaches at Invictus Fitness, Inc. She is an accomplished athlete who has competed at the CrossFit Games five times – including a 3rd place finish in the 2007 CrossFit Games as an individual. She served as a key member of Team Invictus over the four competitive seasons from 2010 to 2013. She took a break from competing in 2014 to heal a back injury and will be back stronger than ever in 2015. Her leadership and mentoring has helped developed several of her teammates and training partners into world-class athletes.

Aja is a world-class athlete who has competed at the CrossFit Games three times as an individual and is also a former professional baseball player. He’s a highly skilled coach and serves as a key member of our Invictus Athletes’ Camp coaching staff and operates his own affiliate, Behemoth CrossFit.

What ebook formats are available? Works on Kindle?

I bought the ebook and I am reading thru my kindle app on the iPhone. Trying to find the goal setting worksheet to download. Any help would be appreciated!

Were there ever winners names released for people who bought the book in the first 48 hours? just curious.

Awesome!! Bought it and read it all! Almost twice! Now when are the winners going to be anounced?

Love this! But please make it available in paperback!!

Hi guys. Just paid for the ebook and did not receive a download link. Can you check that for me?

Hi Treinador! Please email [email protected] with all questions and issues with downloads. Thanks!