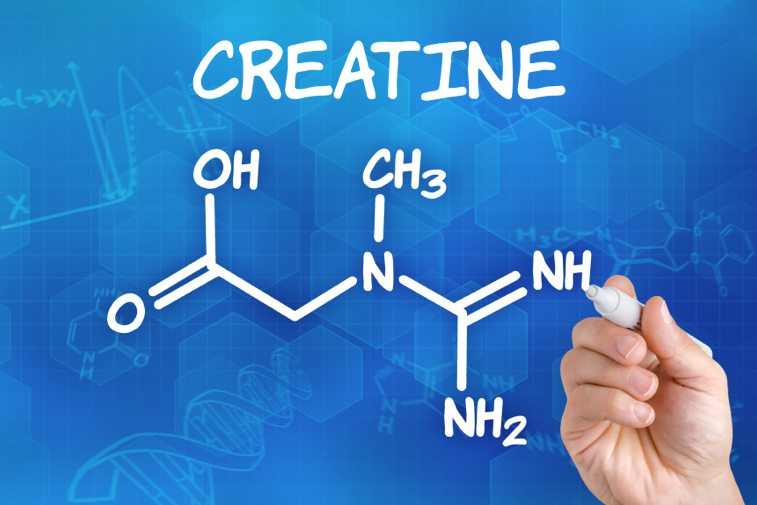 Everything You Need To Know About Creatine
Written by Calvin Sun

Creatine is easily one of the most popular supplements in the fitness industry. It’s been around for over 20 years and has become one of the most studied supplements in exercise science. However, there seems to be a fair amount of misinformation and mystery that still surrounds the supplement. Recently, I’ve received a lot of questions about the function of creatine, it’s safety and efficacy, as well as proper dosages for athletes. The purpose of today’s article is to answer some of these common questions and provide you with enough information to decide whether or not creatine should be part of your supplement regimen.

Creatine is an organic compound that is produced from three amino acids: glycine, arginine, and methionine.

Creatine serves as an essential part of the ATP-CP energy system, also known as the phosphagen system. This system is responsible for powering short duration, high-intensity movements such as weightlifting, sprinting, and jumping. Adenosine tri-phosphate (ATP) is broken down to release energy resulting in adenosine di-phosphate (ADP). At the cellular level, creatine is used to regenerate ADP into ATP resulting in delayed fatigue and improved exercise performance [2,3,4].

Why Should I Take It?

Creatine is produced by your body in small amounts [1,2]. It is also found in some animal-based protein sources such as red meat. The amount produced by your body and obtainable through food is quite low, which is why supplementation can be effective. Some research suggests that vegetarian and vegan athletes can greatly benefit from creatine supplementation because of dietary deficiencies [1].

Numerous studies have found that creatine supplementation results in improved body composition, increased strength, and faster sprint performance [2,3,4]. As a result, creatine tends to be popular with football players, bodybuilders, strength athletes, as well as track and field athletes. Creatine has also been found to attenuate core temperature and heart rate in trained endurance athletes [5].

Does Creatine Cause Muscle Cramps?

Is Creatine Bad For Your Kidneys?

Is Creatine A Steroid?

While creatine is capable of improving athletic performance, it is not a performance-enhancing drug or anabolic steroid.

Is Creatine Recommended For Female Athletes?

Creatine has been found to have positive effects in both male and female athletes. Deciding whether or not you should take creatine has less to do with your gender and more to do with your goals. If you are trying to improve your strength, power, and body composition, creatine is certainly worth considering.

Which Form of Creatine Is The Best (Monohydrate, Ethyl Ester, HCL, etc.)?

Creatine monohydrate still appears to be the best for results. It also happens to be the least expensive version as well. Some research has found that some of the fancy, buffered forms of creatine actually don’t result in any increase of creatine content in muscle tissue [6].

How Do I Take Creatine?

Most research suggests 3-5 grams a day, though some studies uses doses as high as 20 grams a day with positive results. Research has also found that taking creatine post-workout appears to produce better results [16]. Some experts suggest a “loading phase” of 20 grams a day for 5-10 days and then reducing the dosage to 5 grams daily. My advice would be to add 5 grams of creatine monohydrate to your post-workout drinks without the loading phase.

Is There A Brand You Recommend?

I like Optimum Nutrition’s Unflavored Creatine. It mixes well and doesn’t cause any GI distress. Also, it’s very affordable at 15 cents per 5 gram serving. Click here to purchase from Amazon.

Based on current research and my own experience as a coach, creatine is a safe and effective supplement for athletes. If your goals involve increasing strength, improving body composition, or sprinting faster, creatine is certainly worth considering. It also has the added benefits of reducing muscle cramps and attenuating core temperature which can be especially beneficial for CrossFit athletes.

Still have a question about creatine? Feel free to post it here on the blog or on our Facebook page. I’ll either answer your question directly or in a future post.

6. Jagim A R, et al. A buffered form of creatine does not promote greater changes in muscle creatine content, body composition, or training adaptations than creatine monohydrate. Journal of the International Society of Sports Nutrition 2012, 9:43.

10. Greenwood, Michael, et al. Creatine supplementation during college football training does not increase the incidence of cramping or injury. Molecular and cellular biochemistry 244.1-2 (2003): 83-88.

16. Antonio J, Ciccone V. The effects of pre versus post workout supplementation of creatine monohydrate on body composition and strength. Journal of the International Society of Sports Nutrition 2013,10:36.

I need energy. Present recuperating from diagnosis of pneumonia since May 10, o need strength s and and do away with fatigue

if I do crossfit three times/week, should i betaking it on my off days as well if I’m interested in performance, doing better in the open, etc.

Shouldn’t creatine be used before a workout?

To the best of my knowledge:
Not necessarily.
The reason you take Creatine daily over long periods of time is to build up & maintain high creatine levels.
This is why many people have a loading phase – to rush the “build up” into 5-7 days, and then go straight to maintaining high Creatine levels.

What I’m getting at is that your creatine levels build up over time and self-taper. It isn’t as sporadic as caffeine.

Creatine may be one of the most popular sports nutrition supplements of all time, but it’s also one of the most controversial. Research shows that creatine supplements are most effective for people who want to gain muscle strength, muscle tone, or engage in explosive sports like powerlifting, rowing, or sprinting. Many people falsely believe that creatine is only good for bulking up and that using it will stop them from losing body fat. The truth is that creatine volumizes the muscles, increasing muscle tone, which may increase the metabolic rate and accelerate fat loss. Post-workout is an excellent time to… Read more »

One useful information is missing:
When it comes down to creatine, there is only 2 countries worldwide who produce it. It is either from GERMANY ?? (Creapure®), or cheap creatine from CHINA! ?? So, make sure you have the Creapure® logo somewhere on your supplement! It’s only like a 4$ price difference per pound!
Greetings from Bavaria

Hi.. Very well written article. Creatine is useful for athletes trying to build muscle simply because it gives their muscles more energy to use during a workout. Controlled studies consistently show that you can do more repetitions of a given exercise when supplementing with creatine than not. Creatine with SR9009 is the best nutrient combination. SR-9009 reduce blood cholestrol level, minimize inflammation, decrease risk of heart disease and improve overall endurance.

Shouldn’t creatine be taken before a workout rather after since ATP is broken to ADP to produce energy which is needed for the workout?

You know, it is fact that the absolute best form of Creatine is still Monohydrate!
All other fancy forms are just over blown hype.
There is a new “Instant” form though that is over 225% more effective than regular Monohydrate.
It dissolves much better, and it works much better too!

Check it out here:

It’s actually very good and super effective compared to regular Monohydrate or anything other form out there!

Hi, I’m wondering if there is a maximum dose per day if you’re training 2-3 times per day. With the increased work, would you still take 3-5 grams post-every workout? Or just for one session?

Really informative article, thank you. One thing that you forgot to mention is the effect of alcohol consumption while supplementing with creatine. This article is good at explaining that: http://welovethegym.com/creatine-and-alcohol/

Thanks for sharing Valuable information. you must be careful if you are taking creatine body supplements for body building.

Good stuff. I’ve been taking creatine of different brands since 2000. I report no issues.

thanks for the info! if you take creatine after your workout do you take it instead of your whey or can you take the two togheter? thanks!

Nice information share regarding to creative and how these help are improve muscle……. thanks……

Thanks for the post, this has given me good knowledge about creatine because i’m pretty new to it, I just bought some cellucor product that I really like so far if anyone has an opinion that’d be awesome http://www.amazon.com/Cellucor-Creatine-Blue-Supplement-Powder/dp/B00D44YE1K

I am very keen on bodybuilding. I am doing it for four years now. During these four years I realised that the best supplements you can find are here https://www.synthetek.com/products/synthecreatine-creatine-monohydrate/
I use almost all of their products and I see bigger results that I have expected.

You say that we should avoid a loading phase and regulate at 5 grams daily. Thus, even with this amount, should we respect a cycle? In other words, should we take 5 grams daily for X number of days and take a rest moment from creatine intake?

I haven’t found any evidence that supports the idea that a loading phase is necessary or superior to taking 5 grams a day. Cycling creatine is an old practice that probably originates from bodybuilding culture. Again, there doesn’t appear to be a need to take a rest from creatine intake. My suggestion would be to take creatine for at least 6-8 weeks and then you can play with “cycling off” for a week or two to see if it helps give you better results.

When you say “improve body composition”, what are you referring to exactly? I’ve heard so many times that creatine causes you to gain weight. Wondering if you’re saying that creatine will help you bulk up or produce more lean muscle. Thanks!

I’m referring to an increase in lean body mass. In the research I cited, the test subjects gained about 2-3 pounds of lean mass from 4-6 weeks of creatine use as measured by a DEXA scanner.