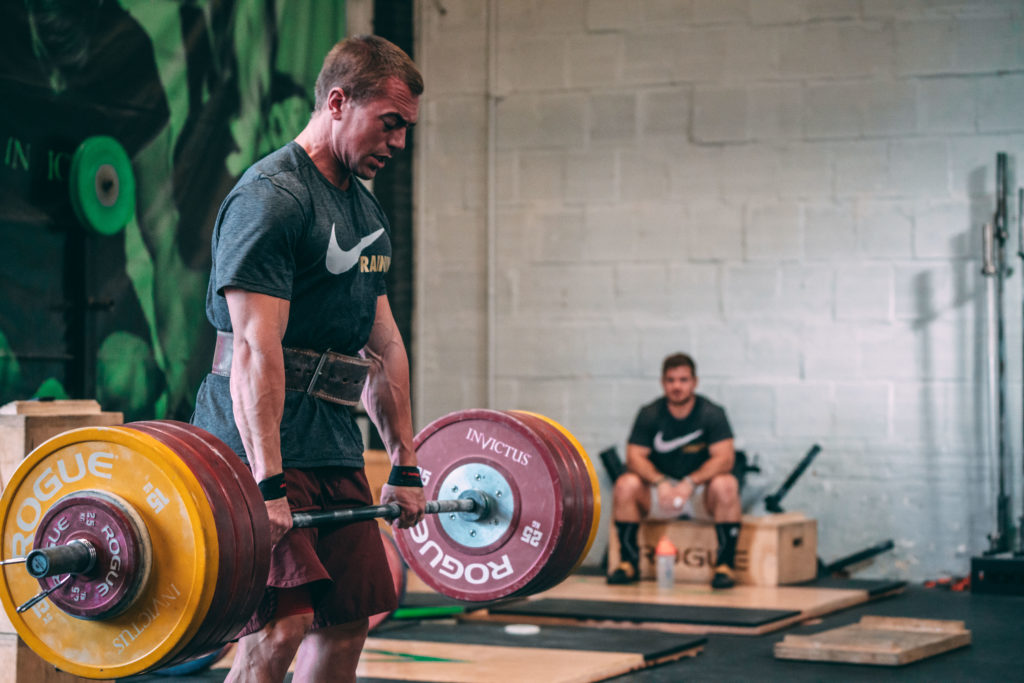 A Case Against Mixed Grip Deadlifts
Written by Michele Vieux

It’s a stronger grip hold than the traditional, double-overhand (pronated) grip and most athletes are able to lift more weight while using it – two strong cases for using the mixed grip (one hand pronated and one hand supinated) for the deadlift. But are those enough to risk imbalance and injury – two strong reasons NOT to habitually use this grip in your training?

I had the pleasure of recently attending one of Julien Pineau’s Strongfit seminars and there were many eye-openers in his theories that I have been able to use to make meaning of certain circumstances with my own body that, until now, nobody has been able to explain. One, in particular, is why my back muscles – specifically the upper trap and erectors – on the left side of my body are more overdeveloped than those on my right when I am right handed. But would it not seem that the right side should be more developed since it is my dominant side?

Two Types of Torque: External vs Internal
If you’ve been exposed to Julien’s theories and his Strongfit website or courses, you already know about the two chains that create torque – rotation that creates force – in our primal movement patterns: Internal Torque (IT) and External Torque (ET). Every movement somehow falls into these chains. You have likely heard more about the ET chain because of the “knees out” cue for the squat. And if you have followed this blog in the past year, you probably have heard us talk more and more about the IT chain, especially pertaining to creating IT torque in hip hinging movements i.e. deadlifts which is our focus today.

Movements of the Internal Torque Chain
Pushing and hinging are the basic movements controlled by the IT chain. This would include anything that falls into these categories: push-ups, dips, shoulder press, deadlifts, kettlebell swings, etc.

Isn’t a Deadlift ALWAYS an Internal Torque Lift?
If you do the deadlift the way it was meant to be done – with the hands in the double-overhand grip, creating IT through firing the muscles listed above then, yes, it is an IT movement. But let’s say you switch that hand grip on one side? Even without weight, you can feel what happens – different muscles contract and those are the muscles of the ET chain. So now half of your body is lifting in IT and the other half in ET and you are therefore not using your body the way it was designed to be used causing broken movement patterns and all kinds of wear and tear that will rear their ugly heads in the future. It might be soon or further down the road – but it will eventually happen.

So What’s the Big Deal?
Using me as an example, this can explain why my upper trap and erectors are more developed on my left side (the underhand grip), vs my right – the left side has spent much more time in ET.
Another thing you should know about my left side is that it has been prone to inexplicable injury, nagging aches and pains, and the unwillingness to participate in the same manner than the right. So the side that is visibly more developed is unable to perform to the level of the less developed side. It’s like certain muscles (pec and VMO especially) are asleep. According to Julien, the muscle can’t be “asleep” it’s the entire chain that’s not properly functioning. So I began to test myself to see where the breakdown lies.

How to Test and Correct IT Movement Patterns for the Deadlift
First you need to be able to identify each muscle of the chain and contract and relax that muscle so you know what it feels like when it is working. You may notice a couple of things while doing this. One is that while you are focusing on just that one muscle, you likely feel others in that chain turning on which is great and how it should be – they all work together.

The second is that all your muscles work together! Meaning both the IT and ET muscles are both working to support each other in the opposite movement chain. So when you practice squeezing those IT muscles, you will likely feel the support of the ET muscles, even though they are not dominant.

Next, find one muscle in the IT chain that you can feel work and focus on that. For example: squeeze your pec then try to find another muscle next and focus on that until they are all firing. Follow the pattern and see where it takes you which could take months.

Continuing to use myself as an example, I started with the pelvic floor muscles and was able to move quickly to the external obliques. Great! I could feel both firing at the same time so I added in the VMO. At first, it was a struggle to keep the left one firing while at the same time firing the pelvic floor and obliques but after about 15-20 reps, I was able to maintain all three. Next, I added in the pecs and my left VMO immediately shut off. And that’s where I currently stand – still trying to maintain the VMO while squeezing the pecs.

Good Luck or Better Timing?
Each time the overdeveloped left back muscles have been pointed out, my bodyworker is amazed that I haven’t had a back injury or chronic back pain. Maybe I have just been lucky or maybe I caught it early enough before something happened. Either way, I wasn’t functioning to my highest potential and have likely been prone to many other related injuries because of it.

Since the Strongfit Seminar, I have worked with a number of athletes who are experiencing unexplainable back pain. When I take a look at their physique, they too have one side that is more developed and they think I’m a genius when I ask them if that is the side they mix their deadlift grip with.

Back to the Drawing Board
My advice to you? Besides sticking with a double-overhand grip for deadlifts (unless you are in a competition for Championship of the World)…Go back to the drawing board. Learn about how your body should move and work and compare that to how it is actually moving and working. Don’t sacrifice speed or load for proper movement patterns – they will resurface eventually. It might seem like a step back but ditch the ego and start over if you have to. You will surely come out stronger and with fewer aches and pains in the long run.

What About Lifting Belts?

Pull-Ups 101: Everything You Need to Know

What It Really Means When You Say You’re Too Busy

GREAT article Michelle…. So needed this and hoping it will change my deadlifting game.

I wonder though… does this explain the mysterious “tilt” in the Invictus t-shirt at the bottom of the page!?

My friend is a huge fan of Julian and follows him avidly. He helped me with my dead lift, and for the first time, I was able to DL without my back hurting, and the correct muscles turning on. I have gone back to the beginning on my DL and stopped going heavy until I have the movement patterns down. Great post!

Glad to hear you’re on top of your back pain! Hope all else is well!

Glad you liked it!