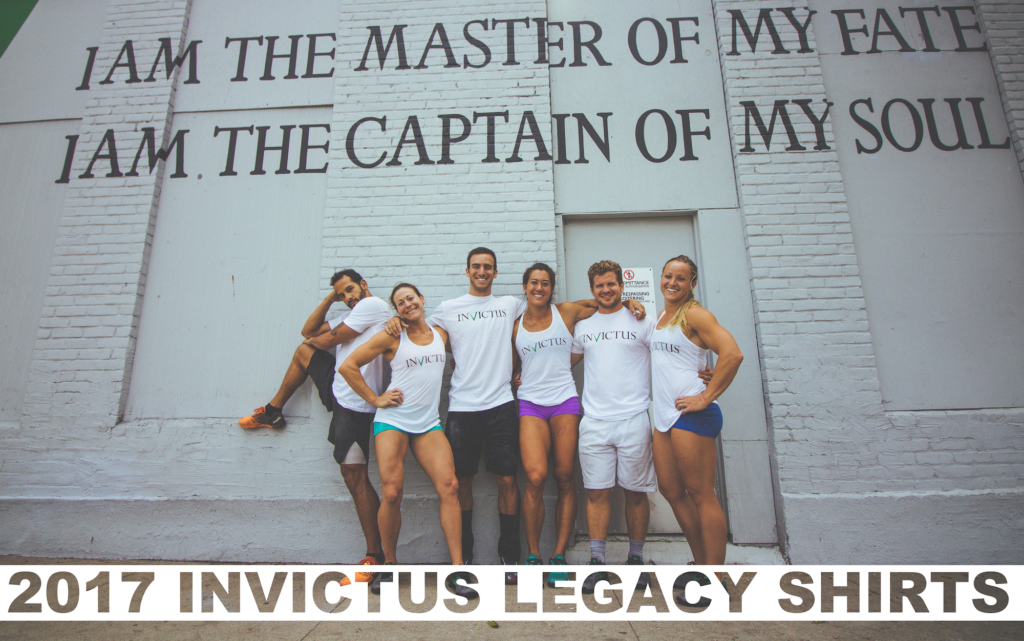 Invictus is headed to the CrossFit Games for the 9th year in a row! We have launched limited edition 2017 Legacy T-shirts and Tank tops to celebrate the success. Get yours before they are gone, and be a part of the Invictus family no matter where you are watching the Games this year.

Walking into the gym on a typical Monday, Wednesday or Friday at 5:30AM, I love that I can expect a few of the same things. I know that Vanessa will have already warmed up 30 minutes, Daniel will be telling jokes and laughing before the punchline and Leah will warm everyone’s hearts as she laughs the most recognizable laugh you’ve ever heard. There are kind welcomes and hellos, questions about work, inside jokes only 5:30AM people would know, and a generally very energetic group for that early in the morning. These are little things I have greatly come to appreciate over the past 9 months or so participating in a normal CrossFit class.

My presence in CrossFit gyms has been an interesting one since I started in 2012. When I first tried a CrossFit workout, I was told that I should compete, and that someday I could be one of the best in the world. Not knowing any better, I jumped right in began to do as much CrossFit as my body would allow. Within a few months I had competed in multiple local competitions and by the time I did my first CrossFit Open in 2013, was told the following year I should try to make the Regional Competition. From there I began training multiple times a day, doing extra skill work, more squat cycles, working with lifting coaches, and pushing myself as quickly towards progress as I could. Sure enough the following year in 2014, I qualified for my first Regional.

From here my fitness took a different turn. I definitely was no longer a normal class attendee, I had special programming, supplements, therapists, and diets to help me achieve a goal of going to the CrossFit Games. This carried on for two more years as I became increasingly isolated from the rest of the CrossFit community and most often was the only one in the gym for either of my training sessions. I was caught up in myself, my own progress, my needs, what I “needed”, often at the expense of others. This carried on through the 2016 Regional Competition, until I decided I needed a change.

The next year looked dramatically different. I decided that since I wasn’t making money as a “pro fitness person” that I would get a full time job, I changed a few of my surroundings, rearranged my priorities, and began to see life from a new perspective. In my head there wasn’t going to be any more competing, no more special programming, no supplements, or special recovery systems. Several years of competitive programming and mindset had worn on me, and I just wanted to be healthy and enjoy fitness. I can remember one of the very first actual CrossFit class I took in late summer 2016, and thinking to myself how foreign is was, how I wasn’t sure if people would make comments, or ask what I was doing.

Over the years of competing, I realized I had created a gap between myself and the rest of the gym members. To my surprise I felt very welcomed, no one made comments about me being a Regional athlete, asked about PR’s, or told me I was just going to smoke everyone in the class. For the most part, no one in class seemed to care that I had ever been good at CrossFit or what the status of my fitness was at that point in time. It was very relaxing. Being able to be a normal CrossFitter became much more fun than I expected as I was able to relax and just have fun with people.

I’m going to talk for a minute to other Regional qualifiers, or maybe just to some of you who have taken yourself out of the class setting to focus on your competitive fitness aspirations. There is a gap that has been created in the CrossFit community between those who compete and those who do not. While there is a time and place for some extra skill work to help the natural progression in CrossFit, it should not remove you from the foundation set forth in a class setting.This gap is perpetuated by the advent of special programs and social media to glorify each of your workouts, gains, and “hard work”. It is easy as a competitive CrossFitter to get into this mentality that you’re better than a “normal” member, or that your activity in the gym has more value.

What if we changed our mindset and looked at it the other way around? Not to burst any bubbles, but if you – as a competitive athlete – to think that you working out for 6 hours a day and sleeping 10 hours a night is inspiring, you’ve got it backwards. Let’s get outside ourselves a bit and look at the rest of the community. The single mom who struggles to get into the gym because of work and her role as a mother suddenly becomes the superhero. The person who is battling sickness, obesity, or perhaps past addictions becomes the one who is inspiring.

Want to close the gap? Start joining classes, even once or twice a week would help. There is some value in having a little extra skill work, but the foundational dynamics are set in class. Workout with the moms in the 8:30 class, the night shift workers in your noon class, the 9-5ers in your evening classes. Ask them about their lives, find out what’s most important to them. Just be a part of the community, isn’t that what CrossFit is about anyway?

Just because you are more fit or can Rx+ a workout does not mean you are above anyone else or need to separate yourself from class goers. No matter your experience level in CrossFit, there is always value in staying connected with the community around you. I promise if you invest in those surrounding you, you will see a change in culture. And hearsay, you may have more fun in the process.

Humble Pie: The Most Beneficial Meal Of Your Day

Community is what Crossfit is all about. Well said!!