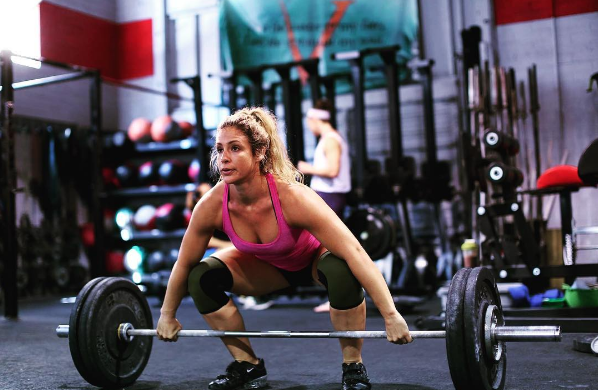 Over the next couple of weeks, we are going to discuss a movement that is only used in the sport of fitness: Barbell Cycling.

Barbell cycling is NOT Olympic Weightlifting; it is unique unto the sport aspects of CrossFit. Accordingly, the principles that govern are different. Simply put, what is efficient to move a maximal load one time is not necessarily what is most efficient to move a relatively light load many times. Barbell cycling is a skill separate and apart from weightlifting, and must be practiced and honed as such.

When we train Olympic weightlifting, we want athletes to practice perfect mechanics. We want them to set themselves properly for every repetition as if they were going to be lifting a maximal load – even if we’re only working at 70%. We often get the question on our blog “should these be touch and go?” when we post something like Snatch x 3 reps. The answer is always the same: “In strength components we highly recommend resetting so that you get into the perfect position for each rep. In conditioning pieces, perform the most efficient variation of barbell movements for your capabilities.”

So how do you determine what is the most efficient variation when barbell cycling comes up in a workout? Over the next several weeks we’ll be reviewing different variations and strategies to help you create your own game plan for workouts and competitive events. For the first article in this series, we will discuss barbell cycling strategies using the Muscle Snatch.

When would an athlete use the muscle snatch in a workout? Generally speaking, it would be used for a workout that calls for high reps and low weight. Jonne Koski and Dan Bailey crushed the 2015 Regionals hero workout “Randy” with times of 2:17 and 2:18, respectively. What technique did they use to take the top spots on this workout? Muscle snatch. Check out Dan crushing that workout (second lane closest to the camera), mainly utilizing a muscle snatch:

The primary downfall of the muscle snatch, however, is that it is expensive. The muscle snatch requires the athlete to pull the barbell higher than a power snatch, forcing the athlete to use more posterior chain and more of the smaller rotators of the shoulder to get the barbell overhead. To this degree, the movement is less “efficient” in terms of mechanical advantages.

Athletes must consider their own strengths and weaknesses, the number of repetitions in the event, the load prescribed, the other movements they’ll face in the event and/or subsequent events, along with a host of other considerations when determining whether the muscle snatch will be their best option. In the video above you see that many of the athletes start out with a muscle snatch, but most of them will eventually switch over to a power snatch. By contrast, Josh Bridges (3rd from the bottom), begins and sticks to a power snatch throughout – allowing him a more efficient pattern that he knew he could perform for the entirety of the 75 reps. Of course, what gave Dan Bailey the victory over all but one other male in the world was that he was able to sustain a less efficient, but faster variation than everyone else for 75 consecutive reps with minimal or no rest. He wasn’t the only athlete that tried to stick to one strategy; he was just the only athlete that was successful with that approach. Ultimately, you will have to know the various movement variations and strategies available to you in order to determine which approach will lead to your best performance.

Now let’s dig into how to perform the muscle snatch variation for optimal speed and efficiency:

On the ascent: Keep the bar close.

Barbell cycling the muscle snatch is a great option due to its speed. Just know when it is appropriate to incorporate this movement in your workout and when to transition to another variation of the snatch, like a power snatch.

Stay tuned for our next post on efficient ways to barbell cycle the power snatch.