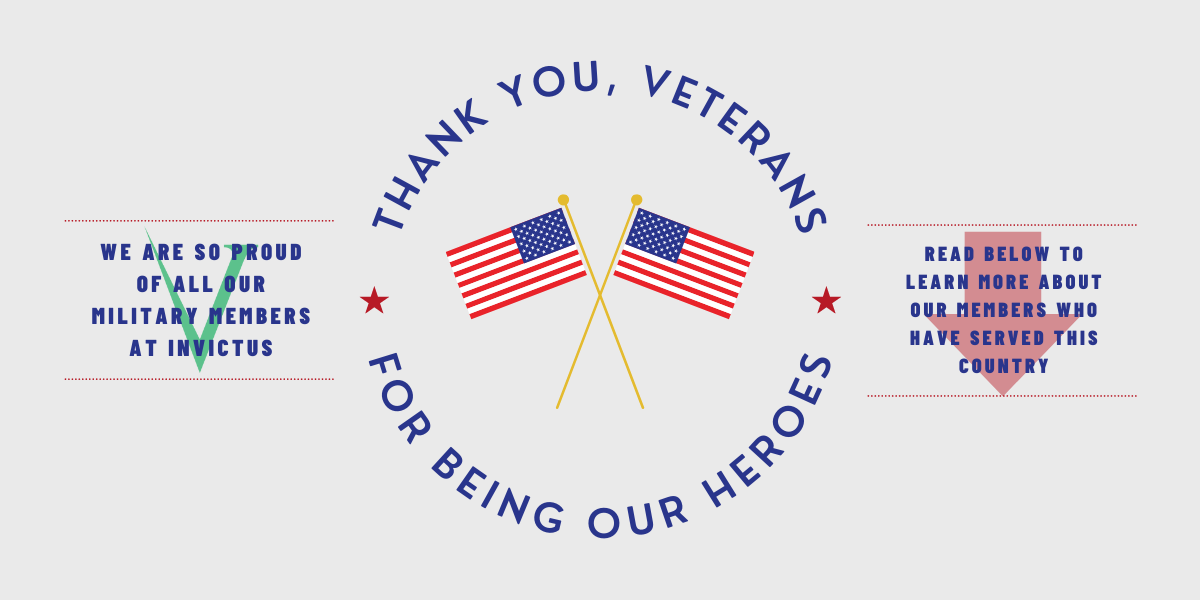 > In what branch did you serve? What were your job title and responsibilities?
Navy, I was an Information Systems Technician Senior Chief, and I was a Spectrum Manager. In a nutshell, deconflicted and assigned frequencies to ships and land-based personnel so they could communicate.

> What are some of the skills you’ve brought from military life into civilian life, especially in the gym space?
In the military I was forced to adapt to new environments I was assigned to quickly and to have grit. Granted you may see me shed a tear from time to time when I miss lifts but I never give up.

> Any favorite memories from your time serving?
1. Meeting my husband at my 3rd duty station in Hawaii
2. Going through WOG day (crossing the equator initiation during deployment onboard USS Nimitz)
3. Pinning ceremony to Chief Petty Officer

> What role does the gym play in your life?
My life is chaos, always. The gym family is MY TIME where I can focus on just me for an hour to 90 mins and have fun while staying healthy and getting strong. 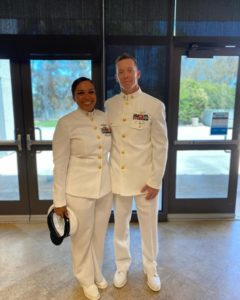 >In what branch did you serve? What was your job title and responsibilities?
I joined the Marine Corps Reserve and went to Recruit training in San Diego in the summer of 1981.  I graduated from boot camp on a Friday and started college on the following Monday.  That was quite a dramatic transition!  After college, I was commissioned and become an artilleryman.  I spent 4.5 years on active duty at Camp Pendleton, then transitioned to the Marine Corps Reserve.  I served the balance of my career in the Reserves and retired in 2013 at the rank of Colonel.

>What are some of the skills you’ve brought from military life into civilian life, especially in the gym space?
Fitness is a critical element of being a Marine, and a big part of our culture.  Staying fit, even after retirement, was pretty easy because those habits are well formed.  I’ve been working out 3-4 days a week, in some form, for a very long time. In the Corps, we do lots of planning.  We can’t do anything without a plan!  The lesson from that is that the planning (the process of thinking thru the problem and the solution) is more important than the plan.  That experience, and the associated discipline of planning, has served me well in my business and personal life.

>Any favorite memories from your time serving?
I’m not sure “favorite” is the right word, but the most significant memories I have are of my 10 months in Iraq.  I served as an advisor to an Iraqi Army colonel and ran an 85 square mile live fire training range.  My team was tasked with running the range, and with training Colonel Abbas’ staff to run the range when the US eventually departed.  It was a fascinating, challenging, and interesting assignment.

>What role does the gym play in your life?
A very important one.  I consider exercising a key part of my long-term mental health plan.  I’ve spent a lot of time in gyms in my life.  Invictus is, without question, the best one.  It is the most supportive and welcoming place I’ve ever been.  There’s also a big social component.  I miss my fellow “cool kids” from the 6 AM class when I’m out of town.  Misery loves company and I can’t think of a better group with whom to share the pain! 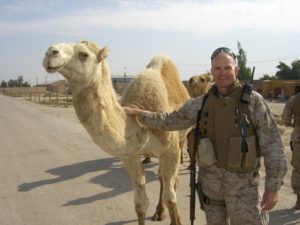 >In what branch did you serve? What was your job title and responsibilities?
I was commissioned from OCS in November 2019 as a Surface Warfare Officer. I reported to USS SHOUP DDG 86 where I just finished my first tour. I chose the Navy because both my Grandpa and Great-Grandpa were Sailors, so it was my way of connecting with them. As an SWO I drive ships and run a division of 5-20 sailors. The ultimate goal of an SWO is to command a ship. It’s unlike other officer jobs because we have a full-time job along with earning our warfare pin – which takes years by itself.

>Any favorite memories from your time serving?
In these last 3 years, I’ve been able to do a lot of really cool stuff from shooting missiles to participating in San Fransisco Fleet week. Growing up in the Central Valley I had always wanted to go to SF Fleet Week but I never thought I’d go with the Navy. I also got to shoot a lot of missiles for training. It’s equally thrilling and terrifying seeing a giant fireball engulf the front of the ship as the missile takes off.

>What role does the gym play in your life?
I joined Invictus to meet new people outside of the Navy – which didn’t work out and to get into Olympic weightlifting. In all honesty, I don’t know why I came back after my first consultation, I’m not the outgoing type and everyone looked so intense and fit. But I’m so glad I did, the 630PM class has become my outlet from work. I found a community of badass women and men that became my friends outside the gym. Fritz, Kirsten, and Trish always pushed me further than I thought I could. Now I don’t always go to work out, it’s more for the community. But it’s also really cool being super fit. 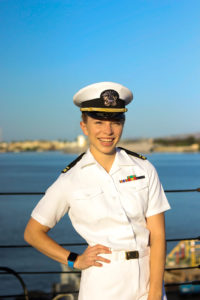 >In what branch did you serve? What was your job title and responsibilities?
I was in the Navy as an Independent Duty Corpsman.  I provided medical care to Navy and Marine Corps members.

>What role does the gym play in your life?
The gym plays a huge role in keeping not just my physical strength but also really helps in keeping me mentally strong and resilient! 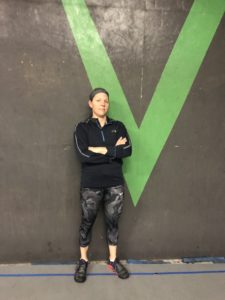 >In what branch did you serve? What was your job title and responsibilities?
I was in the Marine Corps for 22 years working as a logistics officer. The responsibilities included sustaining combat operations and training exercises with logistical support. My favorite memory was meeting the living Tuskegee airmen in 2018.
>What are some of the skills you’ve brought from military life into civilian life, especially in the gym space?
Some of the key things the Military taught me:
1. Mental fortitude
2. Most limitations are in your mind
3. Believe in yourself and you can push through most things. I won’t let my age or past injuries put a limit on what I can do at the gym!
>What role does the gym play in your life?
There is a lot of camaraderie and competition in the Marines. It is a special type of healthy competition that I believe is therapeutic, much like team sports. The gym definitely fills that role for me now. The 6 am class has a lot of trash talkers and competitive folks but it’s all healthy competition. The class will pick you up when you need it and are there for you inside the gym and outside which was very similar to my experience with the Marines.

>In what branch did you serve? What was your job title and responsibilities?

I served in the Navy for 25 years retiring as a Captain. I spent my first four years on a destroyer and the remaining 21 in the Civil Engineer Corps/Seabees (green guys w machine guns on bulldozers).   I served on both coasts, and numerous islands, and deployed five times – twice in war zones.  My last job was as Commanding Officer for Marine Corps construction on the west coast – the biggest project was the Camp Pendleton Hospital on the I-5.  My job translated almost directly into the civilian world- now I take care of the County’s buildings and fleet.

>What role does the gym play in your life?

I picked up on the Fitness for Life culture at the naval academy.  First I was into running, then triathlon.  On a 2009/10 deployment to Iraq, the Marines had a CrossFit gym going and I was hooked. They even brought Glassman, Castro, and some of the announcer folks out to give us a Level One seminar.  When I came back home, Invictus Little Italy was just three blocks from my work. Bingo!  The gym keeps me centered and young.  The community is amazing and I’m always learning. It puts you in a resilient mindset, if I get a good workout in then I can tolerate any chaos they can throw at me.

>Any favorite memories from your time serving?

1. Met my wife of 29 years here in SD.
2. Sailed on on windsurfing team for three years then lived in Hawaii and Puerto Rico where I could sail.
3. Went to France to learn the language for three months- still feel a little guilty about that.
4. Ran the Perimeter Run on Oahu and the Marine Marathon in Iraq.
5. Did a 7.5-mile channel swim w the SEALS in Puerto Rico.

>In what branch did you serve? What was your job title and responsibilities?

I enlisted in the Marine Corps on September 2022 and my contract required six years of active duty. My job title was AH-1/UH-1 (Cobra/Huey helicopter) mechanic and was stationed on Camp Pendleton, CA for most of my enlistment. I was called a” plane captain” which just means I can inspect and test aircraft coming out of phase (rebuilding/complete inspections).

>Any favorite memories from your time serving?