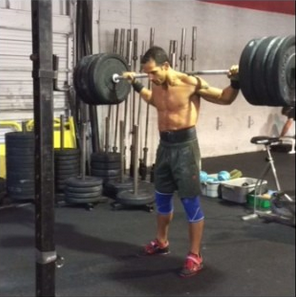 One reason why elite weightlifters are so good is that they “know when to hold ‘em, know when to fold ‘em”. Elite weightlifters know themselves well enough to recognize when they have reached their 1RM for the day and the patience to step away from the bar. Too often in the gym I see athletes, who on a daily basis, try to work past their 1RM for the day. Most days that means ending their lifting sessions on a failure.

Missed lifts are often due to poor movement patterns. If those poor movement patterns are engrained with misses adding up over each training day, week, and months, the result is very inconsistent and unreliable lifts during competition. If you move very well in training, know your body and hit your maximum lifts for that day (instead of always going for a PR), you will rarely miss. Save really pushing your limits for competition and you will be a much more consistent lifter.

Mentally, missing can take a toll, leaving you feeling depressed, weak and lacking the confidence to hit the same number in the future.

Physically, if you are missing reps (squats, press etc.), you are leaving a lot of strength on the table within your training. Think about all the missed lifts you’ve had in the past year – if you took 5-10 pounds off the bar, attempted and made the lighter lift – would you be stronger now?

Stepping away from the bar after a solid lift for the day – instead of always finishing your lifting session on a fail – will lead to big progress and more consistent lifting in the future.

Thanks, I needed that.

Great insight into keeping training positive and ending each session with success. True for any sport; competition clean the table, training – leave enough there that when you return you still will have a good meal the next time.