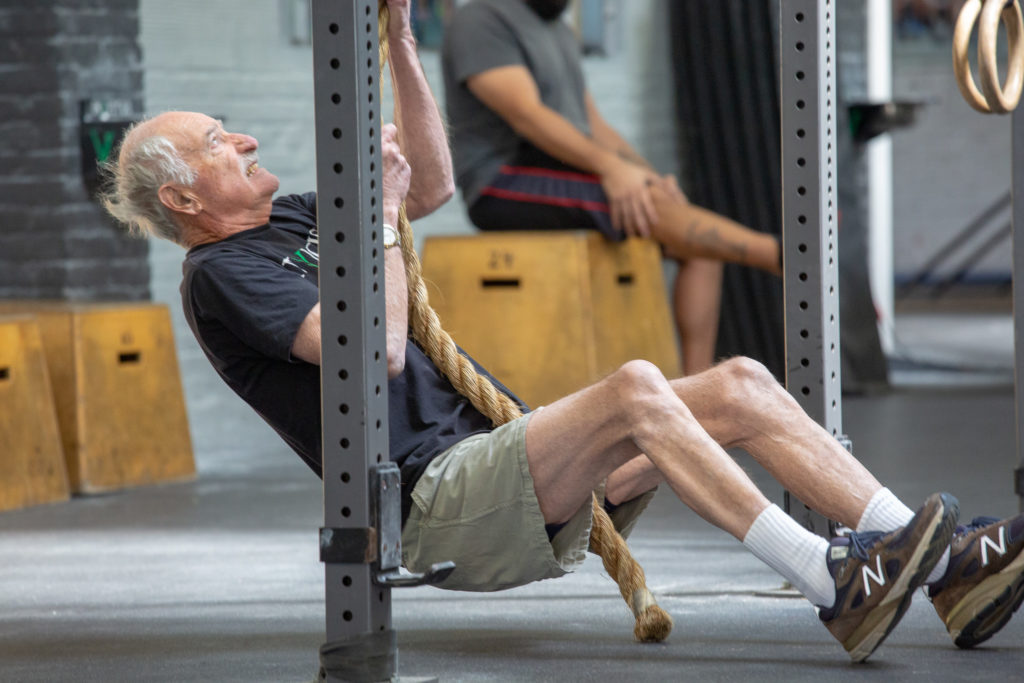 I recently came across an article in a popular magazine that was geared toward people over 50 and how they should – across the board – modify various exercises. At first glance, and to someone who might not know much about prescribing exercise to this population, it seems logical.

But for anyone who has worked with an older athlete, you know it’s not the blanket approach you should take and even broaches on “ageism” – the prejudice or discrimination based on one’s age.

But what really gets me riled up about this article is that it is borderline fearmongering to make older adults believe that exercise is dangerous for them, when in reality, they should approach it the same way anyone else would.

Yes, exercises may need to be modified for older adults but that is also the case for ANYONE and it has nothing to do with age. The exercises you prescribe as a coach or choose to do as an athlete should be determined by current ability; exercise, injury and medical history; mobility; current metabolic condition; and goals; but NOT age, which really has nothing to do with it.

Why should someone miss out on the benefits of various types of exercise because they have been deemed “too old”? Seriously, making this assumption could cause them more harm than good.

There are many adults over 50 years of age that are physically able to do any exercise they want, including those that come up in the CrossFit Games, which is evidenced by the ever-growing Masters category for CrossFit athletes.

I see even non-competitive, older athletes doing things in the gym that people half their age aren’t able to do and shouldn’t even try. Take Larry the Legend for example. When I started working with him over 10 years ago, he wasn’t able to squat below parallel. But now, he has one of the best Sotts Presses in the gym.

He has benefited greatly outside of the gym in areas that align with his goals by working on the Sotts Press in a proper progression, starting with air squats. By having him practice and perfect this movement, he not only became stronger and more stable, we were able to identify areas of his mobility that needed to be addressed and by addressing those issues, he was able to increase the power of his tennis serve and eliminate his lower back pain while serving. One of Larry’s goals is to be able to play tennis for the rest of his life. Another one is to eliminate pain while he ages. Having him try this movement is a part of what helped him to achieve both of those goals.

Or how about YOU try to tell Bruce the Silver Fox not to do high intensity interval training (HIIT). Bruce is in his 70’s and has been physically active all of his life – he has to be reminded/forced to rest most training sessions. People who see him working out think he’s in his 50’s (still too old for HIIT, according to this article) and that he’s a professional athlete.

Although we don’t program running for him – not because of his age but due to a hip injury – he is still able and excited to go hard on the Assault Bike, Erg and with the sled. Bruce would probably stop coming to Invictus if we followed the advice of eliminating HIIT from his his program.

Addressing Issues Instead of Avoiding Them

The article does mention that “age is just a number”, but then it goes on to list 14 exercises that older adults shouldn’t do including: running stairs, hot yoga, HIIT and burpees. Gasp! Burpees! But if you read about their reasonings why older adults should not do these exercises, many of the “issues” can (and probably should) either be addressed or mitigated through strength, balance or supplemental work – just like they would with athletes of ANY age.

For example: According to the article, “[Push-Ups] The classic move may be a great way to build all-over strength, but it puts a lot of stress on your shoulders and upper back, which may be problematic for people with past neck and shoulder injuries.”

But this would be the case for ANYONE with a history of neck and shoulder injuries, not just older adults. Tell me something, how would one get up off the floor if they needed to? It starts with a push-up. So wouldn’t it make more sense to address those injuries or mobility restrictions that prohibit the push-up from being used in programming, and LIFE, instead of not attempting to progress or just avoiding the movement all together?

Another example: According to the article, “seniors should not squat with weights,” yet weightlifting has been proven time and again to benefit their mood, metabolism, brain health, bone density, and to prevent falls.

Should everyone squat with weight the first time they’ve exercised in a long time, or ever? No, but that doesn’t have anything to do with the person’s age. It has to do with their current ability level.

No matter a person’s age or current condition, they will likely be able to progress from air squats to some sort of weighted squat and to do so will benefit them. Remember, it doesn’t HAVE to be a barbell – think goblet or medicine ball – but it COULD be. Again, let’s address what’s keeping them from progressing first, then ask them to try squatting with weight, if/and when appropriate, so that they can reap the many benefits of performing weight bearing movement, not to mention the benefits they received from addressing the issues that were keeping them from doing this movement prior.

Check out this video of Larry the Legend squatting with weight at 80 years old. Remember that 10 years before, he couldn’t break parallel in his squat and now he’s squatting with a 25 pound dumbbell. He is now stronger and more mobile in his 80’s than he was when I met him just before his 70th birthday.

Don’t get me wrong, I wouldn’t have Larry jump on a box or do anything that isn’t worth the risk or that will keep him from reaching his goals, nor do I suggest you do so. But I AM saying it isn’t impossible or dangerous to do these things, depending on the athlete.

So I guess the point here is that the article I came across can and should apply to ANYONE and not be geared solely toward older adults. Just make sure – NO MATTER YOUR AGE – that you address any issues that may cause you injury or harm before doing them, that it makes sense that you’re doing them, and that you’re following the appropriate progressions to do them properly.

Don’t sell yourself short or be afraid to exercise or push yourself just because you are over 50 – there are many things in the gym you CAN and SHOULD do for longevity, mental health, independence and quality of life. Oh yeah and for fun and a challenge, if you’re into that sort of thing.

References
14 Exercises You Should Modify if You’re Over 50 – Reader’s Digest
No Place for Ageism in Exercise Prescription – Australian Physiotherapy Association
Coming of Age: Considerations in the Prescription of Exercise for Older Adults – Methodist DeBakey Cardiovascular Journal

sheese HIIT is the fountain of youth. I say this as a 54 year old. Now if it could only grow my hair back… 🙂
What a disservice was provided by the original magazine article!
(Coincidentally, Runner’s World today referenced a study where HIIT reduced the growth of certain cancer cells!)