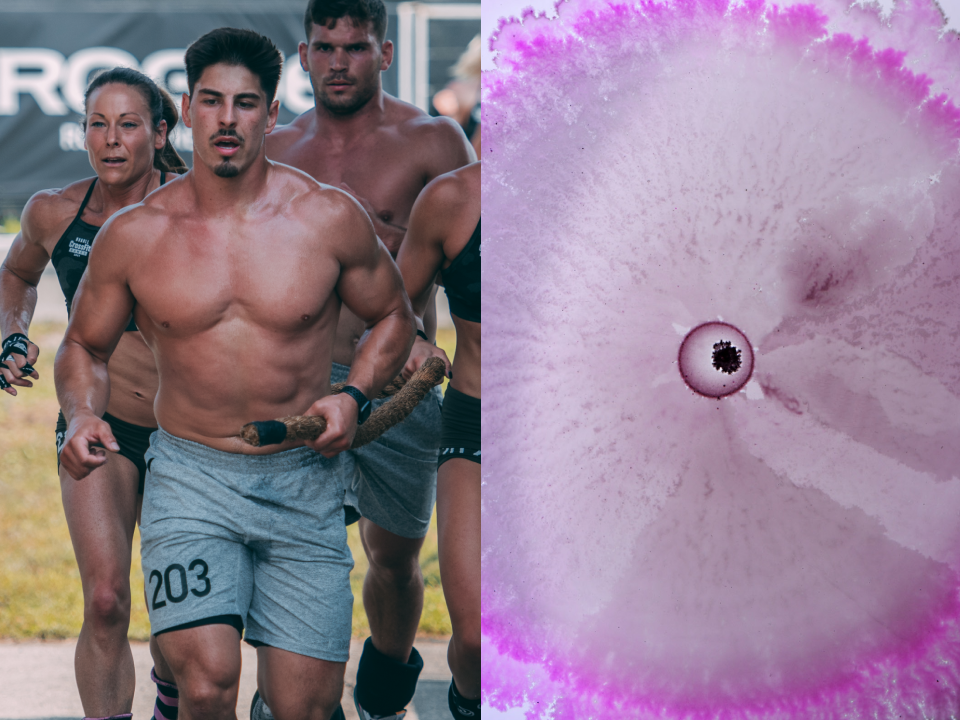 Diet and Your Gut Microbiome

How does your diet affect your gut microbiome, and therefore your systemic health as a CrossFit athlete?

Your microbiome is an ecosystem living inside you, composed of vast microbiota including 38 trillion bacteria, plus viruses, fungi, and protozoa. The bacterial cells alone are as numerous as the human cells inside your body. While microbes live in many parts of your body, your gut microbiome is the most plentiful microbiome of them all.

Unsurprisingly, the gut microbiome (GM) influences the health of your gastrointestinal tract. It also influences (and is influenced by) your brain, skin, and skeletal muscle, making it an extremely important piece of your systemic health as an athlete. Or, as Drs. Erica and Justin Sonnenburg discuss in their co-authored article, “The microbiota provides a manipulative lever to improve human health and to treat or prevent disease.”

If your GM is a lever to manipulate your health, then your diet is a lever that levers that lever. Just like exercise and antibiotics, any diet has both a broad and distinct impact on the gut microbiota. Here’s what we do (and don’t) know about how what you eat affects your gut microbiome, and therefore your complete-body health.

What We Don’t Know About the Gut Microbiome

How we study the gut microbiome inherently colors any knowledge we derive about how it affects human health. It’s important to know that the vast majority of human studies have measured only fecal microbiota, to use as a presumed surrogate of the microbial makeup that was very recently in your intestines and colon. This means that when scientists say “gut microbiota,” they are almost always referring to and extrapolating from fecal microbiota.

So take a microbial-sized grain of salt.

What We Currently Know About Diet and the Gut Microbiome

*A Sweeping Overview of the Western Diet*

Here’s what we do know. Both your long-term diet and short-term changes in that diet appear to affect the structure and activity of your gut microbiome. A 2013 study by Dr. Lawrence David and colleagues showed how plant-based and animal-based diets altered microbial activity and gene expression in human fecal microbiota samples. This study suggests that the human gut microbiome can quickly change between herbivorous and carnivorous functional profiles. (In mice, a shift in dietary macronutrients — carbohydrates, fats, and proteins — can “broadly and consistently” alter the gut microbiota within a single day.) This makes sense, given what we know about what many microbes in our gut ferment for fuel: fiber, usually from carbohydrates, often found in vegetables, fruits, beans, whole grains, and foods that contain “prebiotics.” (More on that in our next Unit.)

There is much concern among scientists about the effect of the “Western Diet,” which is characterized as low in fiber and high in saturated and trans fat, sugar, and industrialized and processed foods, on the composition and activity of the human gut microbiome. Some studies have associated this diet with obesity and inflammatory bowel disease. Could it be that this diet is low in microbiota-accessible carbohydrates (MACs), which would result in a reduced production of short-chain fatty acids (SCFAs), an important anti-inflammatory compound? (Maybe!)

Scientists have studied the Modern Paleo Diet (MPD), which generally includes lean meats, fish, fruits, nuts, vegetables and seeds, and its effect on the gut microbiome. Researchers from the University of Bologna profiled the gut microbiota structure of urban Italian subjects eating MPD, and compared data with other urban Italians following a Mediterranean Diet (MD), as well as people from worldwide traditional hunter-gatherer populations. Geography showed a clear effect on the microbiome’s structure, but MPD subjects showed a high degree of biodiversity in their gut microbes, approximating that of traditional hunter-gatherers. (The microbiome of MPD individuals showed a high relative abundance of bile-tolerant, fat-loving microorganisms.)

The effect of the Keto (high fat, adequate protein, low carb) diet on gut microbes is marked: One study found that a Keto diet shifted gut microbial community structure and function, and reduced levels of intestinal pro-inflammatory cells. But one study on the Keto diet conducted in the 1980s demonstrates the individual variation between the way our bodies handle diet and exercise. In the study, five professional cyclists were studied during intense exercise for one week while on a balanced diet, and then after eating a balanced keto diet for four weeks. Notably, all of the athletes’ bodies quickly underwent “a dramatic physiologic adaptation that conserved limited carbohydrate stores (both glucose and muscle glycogen) and made fat the predominant muscle substrate.” However, two of the five cyclists experienced a worsening of maximal endurance time — demonstrating how differently athletic bodies can react to diet and exercise. This ultra low carb diet (< 30 grams/day over four weeks, while still training) also appeared to compromise hill climbing and sprint capacity, which makes sense: carbs are the body’s main fuel source for high-intensity workouts, and are always used as a substantial fuel source even when in a long term, “keto-adapted” state.

CrossFit athletes — and all humans, and athletes for that matter — live inside bodies whose water balance is constantly challenged. Hydration matters, and not just so you don’t get a headache or feel tired. Remember that you’re made up of an average of 60% of water. But surprisingly, little science has been done to understand optimal hydration levels, or even to understand some of the underlying mechanisms of the body’s hydration. It’s likely the most you know about how much to drink per day came from a Gatorade commercial. One recent study (which included a hydration study) even rejected the ubiquitous advice to drink at least 8 glasses of water a day.

But another recent review of modern studies hypothesized that an optimal water intake of around 2.5 to 3 liters of water per day — that’s close to twelve eight-ounce glasses of water per day, if you’re counting — might impact your overall health by lessening the production of a substance that triggers water saving in your renal (kidney) ducts when water intake is low; and by directly increasing diluted urine flow through your kidneys and urinary tract. Some studies have found that drinking more water might help prevent urinary tract infections and kidney stones.

Scientific studies about how water intake affects the gut microbiome are extremely sparse. One interesting study of alkalescent mineral water unique to Kyushu island, Japan, did find that in mice, drinking this water rich with silicic acid, sodium, potassium, and hydrogen carbonate (AKA “bicarbonate”) made mice gain weight and accumulate fat at a much slower rate than mice that were drinking regular water. Perhaps some training and hydration in Kyushu is in order.

If you are reading this, we have a challenge for you—take this quiz. Correct answers may earn you (what we call at Seed) magic.

The Microbiome and Your WOD (Unit 1)

What’s Going On Inside Your Gut? (Unit 2)

Recovery from Your WOD—with Microbes in Mind (Unit 3)

Anthony L. Almada, MSc, FISSN is a member of the research and development team at Seed, which develops probiotics to impact human and planetary health. He is trained as a nutritional and exercise biochemist (UC Berkeley). He has been a co-investigator on over 50 university-based clinical trials exploring the effects of diet, dietary supplements, and therapeutic interventions upon muscle performance, body composition, whole body metabolism, and joint function in health and disease. In 1990 he created the “thermogenic” category. In 1993 he co- founded the first company to introduce creatine monohydrate to North America. He has worked with CF Games and Regional athletes, top Olympic gold medal swimmers, professional cyclists, physique athletes, and NFL teams. He has been part of Seed’s R&D division since late 2018.