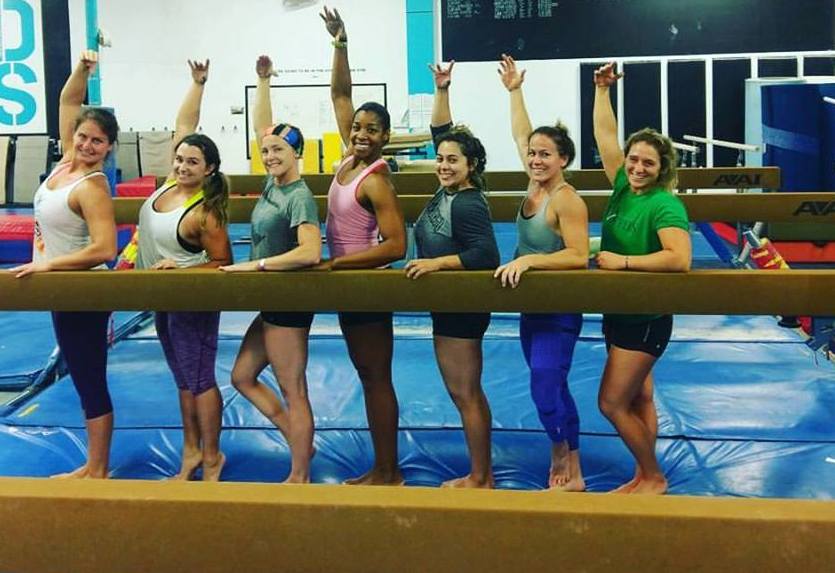 Strong Invictus women on a recent field trip to a local gymnastics facility.

“Why are you trying to be so large?”

“You are so intimidating looking.”

Walk into a CrossFit gym and ask a group of women if they have had these comments directed to them. Guaranteed, dozens of callused hands will fly up into the air.

I used to never worry about my physical appearance. As an active and athletic child, why would I? But as those who interact with the public world know, it is only a matter of time until definitions and public influences change a person’s body peace. Being a gymnast, soccer player, sprinter and now CrossFitter, the result of lifting weights, doing multiple pull-ups and push ups — along with my genetic make-up — has left me with a broad back, thick shoulders and plenty of insecurities.

It doesn’t help that my family and even strangers mention my appearance all the time. I even recall one relative saying, “You should really stop doing this weightlifting thing; no guy is going to want a girl with bigger muscles than his.”

I am not the only one who hears these remarks. Whether it’s thick thighs, protruding traps, or all that mass on our ass…people just love to point out and how different those physical features make us. To cope, we tell ourselves, “Take it as a compliment!” or “ They are just jealous!” The speculators will insist they aren’t jealous because they don’t want to “look like that.”

Envy my ability to lift 175-pounds over my head.

Envy that girl with the thick thighs who can squat over 200 pounds.

Be envious of that woman with the protruding traps, who can climb a 12-foot rope…legless.

I think this quote from CrossFit’s video “Letting Beauty Speak” puts it best:

There are people who spend their entire lives allowing the reflection in the mirror to determine their self-esteem, submitting to a cultural judgment established decades ago. But in CrossFit gyms all over the world, mirrors are conspicuous by their absence. Fitness is gauged in reps, in speed, power, and virtuosity. And beauty is measured in joy. And in pride…

Friends and family will ask, “When you are done with this competing thing… maybe you could go back to looking normal?”

What they don’t understand is that hours of building strength have made us who we have become. But because of strangers who stare and family members who mention how “manly” we look, it is a constant battle between insecurity and pride.
Intelligence, power and strength are trampled in the search of a defined beauty.

I do not regret being involved in a sport whose community culture reveres work over aesthetics. Because as bad as those remarks hurt, as ashamed, embarrassed or sad I have felt about how I look…I have known more joy and I have felt more pride in what I have accomplished because of CrossFit.

Strong & Beautiful: How Weightlifting Is Improving the Self-Image of Women

The Importance Of Posting Your Results

Is It Smart To Workout With Your Significant Other

Never ever heard of a CrossFit woman referred to as “intimidating.” It is unfortunate that a lot of women see pics of the top competitors and think that’s what they’re going to look like “just” by joining a CrossFit gym.