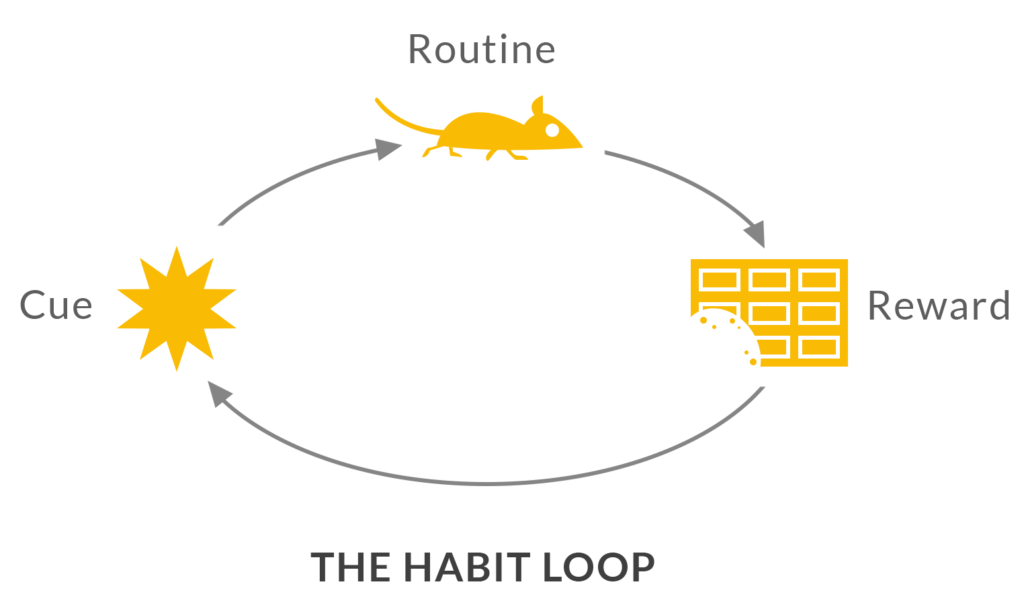 Do you have a habit that you’d like to change? Go ahead and put that in the back of your mind now and we’ll use it as an example situation so that you have a plan to not only turn it into a habit that you can not only be proud of but that could also cause a snowball effect of you picking up other good habits along with it. Just keep it in mind as I give you a little background information.

How Habits are Formed

Research indicates that habit formation comes down to a simple, three part loop: cue, routine and reward. First, there is a cue, a trigger that tells your brain to go into automatic mode and which habit to use. Then there is the routine, which can be physical or mental or emotional. Finally, there is a reward, which helps your brain figure out if this particular loop is worth remembering for the future. The more often the brain uses the loop to good effect the deeper the behavior becomes ingrained—to the point where the behavior itself becomes more and more automatic.

The elements in this loop can be manipulated to help modify our habits – from crashing on the couch with a bag of chips, to heading out for a run – but old habits can never be fully eradicated. They are literally seared into our memory. Isn’t that crazy?!

We can take control of the habit loop and develop new habits that come to overpower and override the old ones. The most effective way to modify your habits is to attack the habit loop directly, and to replace an old routine that is associated with a particular cue and reward, with a new routine. This is a known as the golden rule of habit change: you can never truly extinguish bad habits. Rather, to change a habit, you must keep the old cue, and deliver the old reward, but insert a new routine. (Duhigg)

The 3-Step Process to Turn a Bad Habit Good

Step 1 – First identify the cue that is triggering the routine – this may be anything from a location, a time of day, an emotional state, the presence of certain other people, or an immediately preceding action. You might consider keeping a food journal to help you pinpoint this information.

Step 2 – Second, identify the reward that the routine (habit) is bringing you. This can be tricky, as the reward is sometimes masked among other things. For instance, a man might go to the cafeteria every day at 3pm and order a cookie. The assumption is that he does it for a burst of sugary goodness. However, that is not actually the case. As it turns out, the reward is really the companionship of the colleagues that he runs into when he goes to the cafeteria. Really think about what it is you’re getting out of your habit. Or to put it in other words, what are you looking for by completing your routine?

Step 3 – Once you have identified the cue that triggers your habit, and the reward that it brings, it is time to come up with a plan to replace your current habit with a new one. In the case above, the man found that the reward for going down to the cafeteria at 3:00 was social companionship, so he replaced the act of buying the cookie with simply searching out a friend in the office to chat with for a bit. The cue and reward stayed the same, but he changed his routine. Seems easy, right? Hopefully you nail it the first time but you might need to do some trial and error to figure out the new habit that is going to stick.

If you are like many folks, and you have a whole lot of habits you would like to change, the aforementioned approach—which seems to require tackling one habit at a time may sound like a somewhat long, drawn out, and tedious process. Thankfully, though, there is a shortcut, and it involves what are called keystone habits. Keystone habits are habits that, when changed, set off a chain reaction that extends to all aspects of a person’s life. Some habits, in other words, matter more than others in remaking lives. These are ‘keystone habits,’ and they can influence how people work, eat, play, live, spend and communicate. Keystone habits start a process that, over time, transforms everything because other habits follow suit. (Duhigg)

Though keystone habits may exist in a myriad of forms, and may be different for different people, certain habits tend to act as keystone habits across the board. Exercising is certainly one of these (Duhigg). And eating as a family, and doing things like making your bed every morning (Duhigg) have also been shown to be highly correlated with other good habits.

So there you have it. Habits not only have a large role to play in our personal lives we can have an influence on which habits hold sway, and how they are expressed. It is simply a matter of understanding how habits work, and manipulating this process to our own advantage. So, what habits do you want to change?