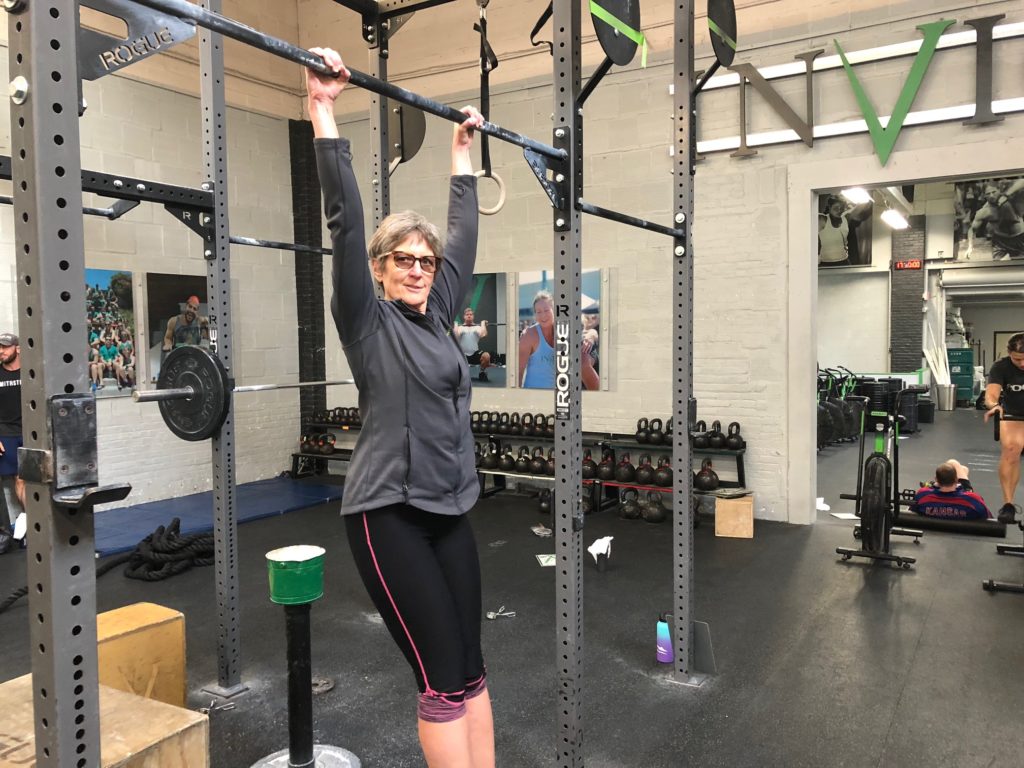 If you’ve been into our 6:30 class (or even the 5:30 because she is always at least 30 minutes early) or spent any time at the Point Loma location within the last year, then there’s great odds you’ve met Fran Schlaefer.

I’ve had the privilege of working with her in both group settings as well as semi-privates, and in the time I’ve gotten to know her I felt she was someone you should get to know as well. We sat down the other night after one of our bi-weekly sessions to discuss her journey and how Invictus has helped contribute to her becoming the best version of herself every day. My hope is that you can take a lesson away from this and apply it to your own life and your own journey.

One of the most positive members I’ve had the pleasure to work with, Fran brings a unique spiciness with her every time she walks in the gym. It’s almost as if you can read it straight away that she raised three rambunctious boys who continue to playfully torment her to this day. It’s through one of these sons that she got the start into her fitness journey.

Looked at as skinny and athletic basically her entire life, Fran was always the one wanting to do what the boys were doing, or challenge her brothers in any athletic endeavour. But, being a product of the times she was raised in, Fran was always encouraged to let her brothers win because of their “fragile egos” – as she puts it. But despite this, she never stopped challenging herself to prove people wrong. Fast forward a few years, and her 50’s rolled around, bringing with them a whole new challenge she had never experienced before.

All of the sudden Fran started to gain weight, and couldn’t stop. She tried everything, from 1000 calorie/day diets, to just about every diet under the sun, all to no avail. Now overweight, Fran was unable to do the things she had previously taken for granted. Grocery shopping became a chore and just thinking about gardening got her heart rate up. Seemingly mindless tasks as simple as walking to get the mail began to get her winded and out of breath. This pattern continued for years until it came time for one of her son’s weddings. It was that moment when she made the decision to change. As she states, “I didn’t want to be the overweight lady in the back of my son’s wedding pictures for all of eternity.”

It happened to be the perfect time. Her son had just completed his Level 1 CrossFit Certification and wanted to practice coaching in his spare time. Fran was the perfect candidate. She immediately began working out in his garage, completing simple tasks like ladder drills, air squats, push-ups, sit-ups, etc.

It worked! You see, what Fran had been missing this entire time, was a physical fitness regimen that pushed her past the point of comfort. CrossFit became that for her. She now had goals to work towards rather than just sitting on a stationary bike for hours with no result. Just four months in and Fran had already lost 40 pounds. An amazing feat for anyone, let alone someone nearing 60 years of age (with another 10 pounds dropping off throughout that year).

Fast forward another couple years, and Fran has moved to San Diego to pursue a nursing job. In the meantime she became a member at Invictus. From day one of working with her, she has been one of the most motivated clients I’ve ever met, making her such a pleasure to coach.

There’s no room for complacency with Fran. She may be stubborn as all get out (we will get you that darn pull-up someday Fran!!), but it always comes from a place of simply trying to better herself in every way, every day. Her motivation is noticeably contagious. Simply being around her on a daily basis has boosted the motivation of countless other members at our gym, and it has been amazing to watch this from a coaches perspective.

When asked why she is so motivated all the time, and so passionate about her journey to optimal health, Fran’s answer really made me stop and think. So many times people will give me a generic answer like, to be a better mom or dad, to be healthier, to be better at this or that. I’m not discrediting any of these in the slightest (they’re all things we should aspire towards), but what Fran gave me is so much deeper when you take a second to really think about it. I believe it is a lesson we could all take away from this and apply it to our own personal growth.

What was this response?

“To have the freedom to be.”

This simple statement creates an umbrella effect for everything in life. So often we get caught up with small things – getting our first pull-up, PR-ing a lift, getting a raise or promotion at work, you name it – that we forget to appreciate our ability to do those things in the first place. She told me that her entire life she was confident, proud, and able…until her 50’s. So, for someone to have that freedom and subsequently lose it, she’s gained a whole new perspective and appreciation for what it means to truly have freedom and independence.

…Quick side note, just to emphasize the true nature of her spiciness. Fran pointed out to me how much pleasure it gives her when people ask her if she needs help lifting heavy bags of soil at Home Depot and she can smile back at them while lifting it with ease. I got a kick out of this, but it’s falls directly into her statement of having the freedom to be. She doesn’t need to rely on other people anymore like she did for a period of time, and that’s amazing…

At the end of the day, life is short, and she (having lost a brother to a car accident) fully understands that it can be taken away at any minute. Rather than overly obsessing about minute details, take a step back and appreciate the journey you’ve taken to get to where you’re at. Really get a grasp on the freedoms and abilities that you do have, and if you’re still unsatisfied, go do something to change it.

I thoroughly appreciated the opportunity to learn so much from Fran during our discussion, and working with her on a daily basis has been a continuous source of excitement. I hope the lessons and story that Fran has shared with me can resonate with some of you and either inspire you to do something different, or cause you to take a step back and have some appreciation for the abilities you do have. I personally get caught up in the little things more often than I’d like, so I really appreciate Fran’s unique perspective on life.