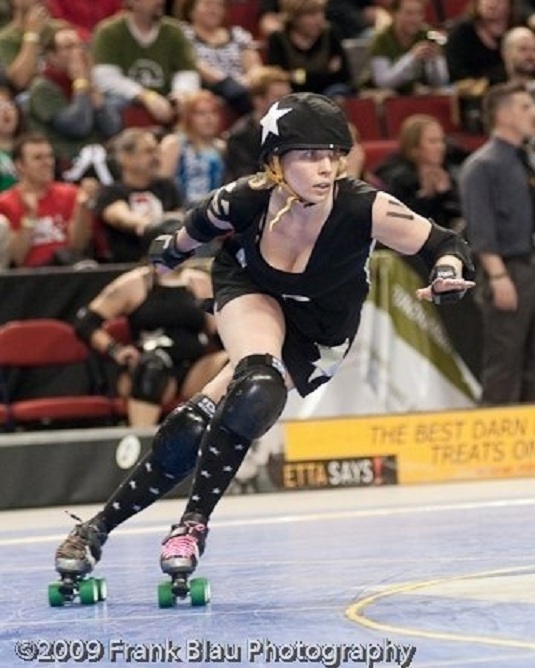 No more victory PBR and whiskey dousings like the good ol’ days in Seattle after playing to a crowd of 7,000+ in an arena, but that is just fine with Dani “Dee Troit” Heckman who now plays for the San Diego Roller Derby, where bouts are  held in a roller rink like we remember from our good ol’ days at Skate Nite in grade school. In fact, skating with a team in smaller league was one of the highlights of her season.

“It [being a part of a smaller league] is more fun and not as joblike as leagues I’ve been a part of in the past,” says  Dee. “You actually get to have a life.” As I learned from our conversation, Roller Derby has been springing up all over the country for a couple of decades and many of the squads have practice teams to draw from – meaning it is very competitive and time demanding to participate in a league.

Dee Troit got into Roller Derby in 2006, when she was snowed into her apartment and started watching a TLC documentry marathon about derby-style skating. It got her excited enough to Google it and find out that the local start-up league was having an open call two days later and wam, bam…she’s on one of those practice teams.

If you haven’t figured it out yet, Dee Troit is Dani’s nickname. Team members usually take them up when they join a league and they have some significance to their bouting style, personality, or, as in Dee’s  case, their hood. Dani is from Detroit and her number is 8-mile.

“It is like having an alter ego,” she explained. “We have mothers, grandmothers, doctors, and lawyers on my team and they are totally different people when they’re in the rink.”

I also learned that each team of 5 (4 blockers and 1 jammer) is on both offense and defense at the same time. Points are scored when one team’s jammer slips past the pack of blockers and begins to race around the rink trying to lap the others for points. Dee is a jammer (which is indicated by the star on her helmet) and set a personal record of 25 points in one jam! In case you didn’t know, it is considered pretty legit to score 10 points in a jam and the world record at the time was 27 points. And, in case you don’t know what a jam is, it is a two-minute period within a 30-minute half.

Lots of the skaters have “moves” like backwards skating (unheard of in this type of situation) and old school skate rink moves. But Dee’s is her ability to move her feet around a lot and get low enough to sneak under people.

If Dee goes out during a bout, she’d want her teammates to remember her as, “a good teammate and a player that jammed well.”

To her Invictus team and others that don’t know her that well, she insists that she’s, “approachable and fun even though she’s quite and shy in the beginning.” She likes to meet new people so don’t hesitate to introduce yourself when you ask for her autograph. You could even do this in person at her final bout of the season this Saturday!

Dani emailed me after our interview because she forgot one important piece of information. “I just wanted to say that I notice a world of a difference when playing roller derby since I have been going to Invictus. My endurance has improved and I can definitely handle the hits better.  I skate with a lot of girls whose only form or exercise is skating; going to Invictus has physically shown me the benefits of cross training, and I am grateful for it.”

Wow Dani!!! This is awesome, I had no idea you did this! I can’t make it this Saturday, but I would LOVE to watch sometime.

As Dee Troit’s and Dani’s #1 fan, I would like to give a shout out to Level4 Crossfit in Seattle and Invictus as it’s been pretty cool to watch the transformation in her skating since starting crossfit. She’s quite a speed demon at the rink!

This is great Michelle! Thanks 🙂 I hope to see some of you at the game on Saturday.

Next time I train, I am going to channel Dani on the rink! 🙂

I am so bummed that I will be gone this weekend. I had no idea that under her sweet demeanor there was a bad-arse streak that sends Dani flying around the roller derby rink.

Dani, you are awesome! I am so happy that you’re part of the Invictus family, and so excited to watch you on the rink in the near future.