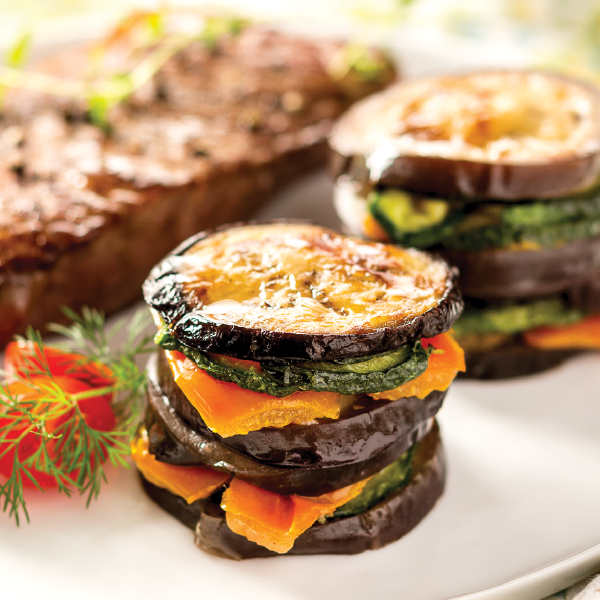 I was out to dinner with a friend the other day and it happened to be #MeatlessMonday so I was scanning the menu to see what options were available to me when the Veggie Naopleon caught my eye. Even though it was sans meat, it was delicious and I didn’t feel cheated at all. I was quite surprised at how hearty the meal was proud of joining the Clean Plate Club that night! It was so good, in fact, that I have duplicated the recipe at home a few times – using what veggies I had on hand at the time – and have been equally pleased with my results.

There are a few things I love about this recipe. 1) It can be a side dish or a stand alone dish; 2) It is good for omnivores, vegetarians and vegans alike; 3) It can be done on the grill – no need to turn on appliances in the hot summer; and 4) It is very versatile – it allows you to be creative and use whatever you like or have on hand. Anything goes!

INGREDIENTS
I have tried a number of different combinations and here are some of my favorite veggies to grill and use for this recipe:

– Portabella Mushrooms: These make a great bottom layer and add that meaty consistency to the stack. Use a spoon to scrape out the gills and stem before grilling. You will use one portabella per Napoleon stack.

– Colorful Bell Peppers: Pick your favorite color to add variety to the stack. Grill them whole then remove the skin & seeds. Don’t be afraid to let the skin blacken – this will help caramelize the flesh and you will be removing the skin anyway. The easiest way to do this is to cover them in foil or in a container after you grill them so that the skin is easy to peel off. You will use ½ of the bell pepper for each stack.

– Zucchini or Yellow Squash (or both!): Cut the ends off then cut them in half. Stand them on end and slice them about ½” thick lengthwise. You will use ½ of the zucchini for each stack.

– Eggplant: Cut the ends off then peel it by standing it on end and using a paring knife to cut in a downward motion around the outside to remove the thin skin. (Or leave it on if it’s not too tough). Slice similarly to the zucchini. You could also slice it in rounds if it is the same size or larger in diameter than the portabella. You will use one or two slices per stack.

– Onion: Remove the ends and skin then slice in ½” rounds. You will use one or two slices per stack.

– Tomato: I don’t grill the tomato for this recipe but you could if you want. Leave it whole to grill it then cut it in half after. Or, you could do what I did and add a few fresh slices into the layers of your Napoleon which adds a nice change in temperature, freshness and coolness.

COOKING INSTRUCTIONS
– After you slice up your veggies of choice, drizzle or brush olive oil over all sides then sprinkle either with salt & pepper, Magic Mushroom Powder, or some sort of Italian seasoning blend. They don’t need to marinate long – the time it takes the grill to get hot is perfect.

– Fire up the grill! I tend to cook things on a higher heat (medium-high for this recipe) but if you don’t want to have to monitor it closely, go for a medium-low heat. Make sure the grill is hot before you start loading on the veggies.

– Start with your onions and bell peppers first. The onions will take the longest to cook and the bell peppers have four sides plus the time you need to steam them for a few minutes after, so they take a little longer.

– Once you have turned the bell peppers twice (2 sides), load on the rest of the veggies. The other stuff I listed will only take a few minutes per side so don’t wander too far. It might also behoove you to set a reminder alarm.

– Once you have cooked all sides of the bell peppers, wrap them in foil or put them into a container for a few minutes to steam.

– Grill the remaining veggies until soft but not mushy.

– Remove everything from the grill.

– Peel the bell peppers and remove the stem and seeds. Cut it in half or quarters.

– Start stacking! I like to use the portabella as the base and I put a layer of pesto about every other layer. Stack in any order you like – there are no rules here!
Serve and enjoy!

You will probably have a few slices of leftover veggies that you didn’t use in your Napoleons – you can use them to make this delicious grilled eggplant salad so you have a lunch side to take to work tomorrow!

Easy Way To Use All That Garlic!

Protein On The Go – The Scotch Egg

The Problem With Brown Rice