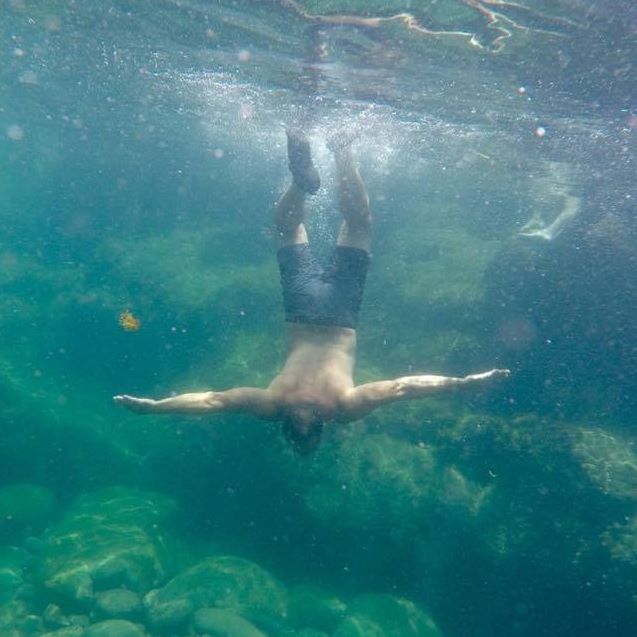 Todd Bechtel is one of the most positive and uplifting people I have had the honor of speaking with at Invictus. As a seasoned firefighter with over 20 years experience, he is no stranger to challenging situations. However, when he was diagnosed with a rare and aggressive form of prostate cancer, he used his emotional and physical strength to defy the odds. We have a lot to learn from his experience.

Todd was always an active and healthy guy. As a native San Diegan, he always took full advantage of the great surfing. He even traveled to some of the world’s best surf spots. Due to the physical challenges of being a firefighter, he didn’t have a problem staying in good shape. It was in 2010 that Todd’s life took a detour.

“On a routine fire call, I fell through the roof and broke my hip. I had to have a full titanium replacement. The recovery was intense, and I had to learn how to walk again.”

During the long period of recovery and the usual hustle and bustle of life, Todd fell out of shape. He put on weight, his energy plummeted, and he felt like he needed to change in order to get his life back. Slowly he began his regular workouts at the station, and things were getting back to normal.

In 2015, Todd accepted a position running three consecutive San Diego fire academies lasting 15 months. The job demanded long hours and gave him little time to focus on his health. However, he knew he had to make his health a priority to heal from his hip replacement. He worked out with the recruits in the early morning and began a CrossFit-style workout with a colleague.

“At lunch, we would go to the gym and workout. I found myself out of shape when we did CrossFit workouts. My co-worker was going off light-duty and heading back to Invictus, and suggested I join him.”

In the summer of 2015, Todd joined Invictus, and while his visits were sporadic due to work, he tried his best to make it in a few times a week. While he had lifted weights in the past, many of the techniques and workouts were brand new. By the end of the year, Todd was hooked. When his work schedule freed up, he decided to take the time to make a change.

“I wanted to take some time to focus on myself. I felt like I dabbled before, but I wanted to do everything right this time. I consulted with Nuno about what I should do, what I should eat, and I began the process of reinventing myself.”

Right after Todd made his commitment to self-improvement, he was hit with some devastating news. During a routine physical, his blood work came back abnormal. He was positive for markers of prostate cancer. He was told to follow up with his urologist for a biopsy and wait for the results.

“When the urologist called initially, I missed it. He didn’t leave a message, so I figured it was good news. When I returned his call, I was back at the fire station.”

The strong bond that firefighters have with each other is well known. The people you work with are your family. Todd’s station was no exception. They anxiously awaited any sign or indication from Todd while he talked to the urologist about his biopsy results. The doctor explained that his biopsy was positive for prostate cancer. The biopsy results together with his blood work painted a dismal picture. The cancer was very aggressive. He needed to follow up immediately.

The expression on Todd’s face was enough for silence to fall over the room. However, the shock soon turned to rallying support and encouragement.

“Everyone was optimistic. I can compose myself in most situations, but hearing how serious my case was and the high likelihood of it spreading was incredibly scary.”

Todd was immediately referred to a surgeon to discuss treatment. He was told he had two options. He could have surgery and remove his prostate entirely, or undergo radiation therapy. Despite the substantial risk and painful recovery, surgery offered the best odds for remission.

“I felt like I had just gotten myself back from my hip replacement, and now I had to undergo this incredibly invasive surgery. ”

Todd was told that it was likely that the cancer could spread even before his surgery; the cancer was just that aggressive. The wait before his radical prostatectomy was incredibly stressful. His wife was understandably devastated by this sudden news. Still, she put on a strong face and continued to provide unwavering support for Todd.

The surgery itself went smoothly. Although recovery was incredibly painful, Todd stoically dealt with the discomfort, as he always did. During the procedure, the doctors took multiple biopsies to check if the cancer had spread. Shortly after surgery, they came back with the great news that the biopsies were negative. The surgeons cautioned Todd that while this was positive news, with the type of cancer he was facing, they still suspected the cancer had moved outside his prostate.

Over the next three months, Todd recovered from the surgery and slowly got back into the gym. He strived to be flawless with his nutrition and continued to follow the guidance of the trainers who understood his particular circumstances. Even with his ever-changing and demanding work schedule, he made time for semi-private sessions with Nuno to continue to heal both physically and mentally.

Todd returned to the hospital three months later to check his blood to see if the surgery was successful. Unfortunately, the results were not what he wanted to hear. He still had cancer. The news of his blood test was a devastating blow. The cancer had spread, but they couldn’t even pinpoint where it was. All the scans had come back clear. He was now fighting an invisible and deadly monster. Todd was re-staged as stage four and told to prepare for the worst.

“I remember the doctor talking about treatment options and ways to keep me comfortable. It took me a few times to understand what they meant by ‘comfortable.’ My wife and I broke down. I was given two to five years, at best.”

Instead of accepting his fate, Todd fought back. He sought out a clinical trial in Phoenix with a revolutionary new way to scan for his type of cancer. Using the data gathered from his scan, they were able to pinpoint the location that the cancer had spread. He was then scheduled for radiation therapy to target that particular area.

“I was given this new beam of hope. Now I’m being told that this is curable. Now I have this renewed motivation to beat this thing.”

As he began radiation treatment, Todd stayed motivated to continue his workouts at Invictus. He didn’t know how the radiation would affect him, but he wanted to accomplish what he could. The support from the Invictus coaches, especially Nuno would continue to push him through each radiation session. Todd was hit with radiation five days a week, for two months straight. Still, he came in for regular workouts.

“Lots of days I felt worthless in there. But I told myself, ‘I’m going to come in, I’m going to do it.’”

During his treatment, Todd used his family and Invictus for support to stay positive, motivated, and healthy. The ability to control his workouts and nutrition helped with the difficult mental aspect of his treatment. However, a few weeks after radiation had completed, he felt the best he ever had. He continued with his nutrition, workouts, and has maintained a positive outlook.

Todd is happy to report that his latest numbers are promising. He is showing signs that the cancer is dying. He will continue to live a healthy lifestyle that includes following a low-inflammation diet and regular workouts at Invictus. His continual positivity in the face of significant challenges is why Todd, without a doubt, has the Invictus mindset.

Transforming My Body And My Mind

Keep fighting the fight Todd. You’re an inspiration to all of us and a reality check for everyone that life is very precious. Embrace it, love it, own it!