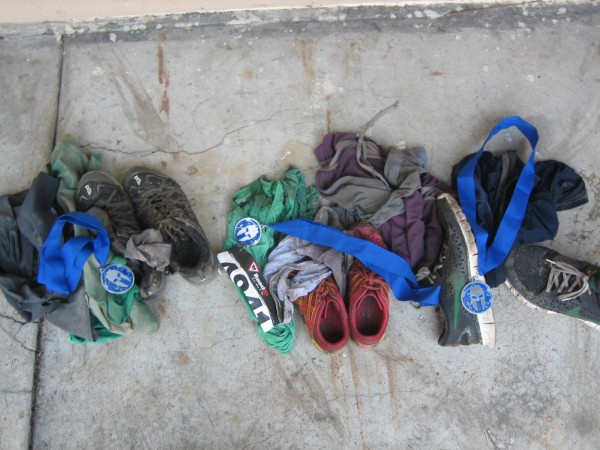 A little over a month ago, my brother George suggested that I come out and visit for the Super Spartan. I had no idea what that was. When he described it to me, my response was: “Sounds fun. I would love to watch you guys run that.” That is not what my brother had in mind.

When George suggested I run this race, I thought he was crazy. To say I was in “ok” shape would have been quite the overstatement. Granted, I’ve gone through periods of regular exercise and taking care of myself in the past, but those were few and far between. Moreover, since graduating from law school back in May, I took what could only be described as atrocious care of myself. Regardless, George told me he could put together a program to get me ready for this race and I trusted him.

Having just gone through failing the South Carolina Bar Exam and being dumped by my girlfriend over a two-week period, I realized that I needed some way to get my life back on track. Committing to running the Super Spartan with George and Sarah seemed like an opportunity to do so. I found that by making one decision to push myself in a positive direction, it became easier to make other decisions to keep my forward momentum going. Within a week of beginning my training I stopped drinking. Shortly after that, I started looking at my diet and making small changes to help me improve my progress. Once I started caring for myself, progress came easier and I was generally a much happier and more productive person. I had picked up the positive momentum I was hoping to form.

I must admit though, things were not all peaches and cream. There were plenty of days where I thought I wasn’t progressing fast enough and that I wouldn’t be ready in time. A month is a short period of time to go from being a slob to an “athlete.” I had never run longer than a few miles in my life, and now I was expected to run 8.5 miles with 20+ obstacles. Whenever I would let these thoughts creep into my mind, I would once again become certain that George was out of his damn mind. Nevertheless, I kept on trusting him and he continually encouraged and advised me.

Fast forward to race day, and I was feeling great. I was about to do something that would have been impossible for me only a short time ago, and I wasn’t even nervous. Over the course of my training, I realized that my nutty older brother really did know what he was doing. Team Economou was ready to tear it up!

By staying positive and encouraging each other, we made progress quickly. Yeah, there were plenty of times where I came to obstacles that were EXTREMELY difficult for me.

Yet, where in the past I would get negative and quit, I was able to traverse these impediments with the knowledge that I could get past anything if I just allowed myself to do so. Moreover, George and Sarah never stopped encouraging me. For that matter, George never stopped encouraging anyone. Not even strangers. It was a bit like running the race with a super intense Mr. Rogers.

In the end, I didn’t set any records, win any medals, or even finish remotely close to the front of the pack. Even so, the Super Spartan was a victory for me. I accomplished more than I had previously thought possible, and I did so with a positive attitude. I moved beyond the stumbling blocks life had put in front of me, set my mind on a goal, and achieved what I set out to do. To make things even better, I got to do it all with brother and his lovely wife beside me throughout the entire process. Yeah, that’s a win in my book.

(A brother’s note – I couldn’t be more proud of my brother and I’m glad he took me up on the challenge. I knew that he was having a rough run at things the past few months and I knew that while encouraging words would help, they would only go so far. What he needed – in my opinion – was a new and positive reference. Setting a goal (run the Super Spartan), drafting a plan (online programming courtesy of brother), and executing the plan (all him) equaled goal accomplishment, and a new reference to provide guidance and direction for his decisions. Awesome job Jay…love you man, and you did win a medal ☺.)

Goals do matter…and a supportive family always foes along way! Great job on your victory…you ARE a Spartan Warrior…OH-RAH!!!!!

Jason, Thanks for sharing that — it was very inspirational. It was nice to meet you on Saturday as well. Brian

Great work Jason! It’s always an inspiration to see people push themselves beyond what they think are their limits.

Anyone got a good hotel dumbbell workout I can hear myself getting weaker out here in Hawaii!

George will forever be referred to as “Super intense Mr. Rogers” from now on.

Inspirational. Now that you mention it, George does strike me as a super intense Mr. Rogers 🙂

Way to go, Jason! George may have given you the tools, but it was you who took charge and made the positive change.

Such a great post! What a great perspective and outlook Jason! I love your description of George being a super intense Mr. Rogers. Love this.