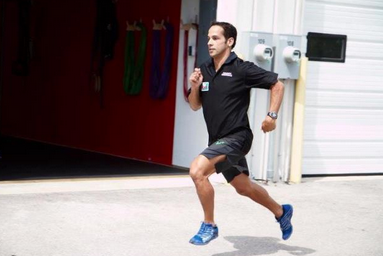 It has been awhile since we’ve had a review of proper run mechanics. I was reminded of this by a recent workout that included rowing and running. I recently heard that all there is to running is “putting one foot in front of the other”; in the simplest of terms that could be true, but its also very far from the truth. Let’s cover some of the key concepts of run mechanics so that everyone at Invictus receives some proper coaching.

I want to talk about the concept of pulling your foot off the ground versus pushing off the ground. I don’t have a degree in physics but if you think about some general concepts. When you push off the ground, which way is that going to propel you? You got it – it will push you upwards. But the goal of running is to move forward – not upwards. So if you know that you are not supposed to push off the ground, how do you pull instead?

Before we cover some of the most helpful drills to teach this concept be sure to check out one of my previous blog posts on proper run mechanics for some of the other core concepts.

I recommend the following drills in order to help you become proficient in running. Remember, there is going to be a learning period and you will have to practice regularly if you really want to get better at running. Check out the video that shows the following drills:

Drill #1 – The first drill I like to teach is standing in the ideal position and having the athlete pull their heel up directly underneath the hip. The key here is picking up the foot and the leg; sometimes, we see someone just picking up the foot and it ends up looking like a butt kick. This is NOT what we want. This drill will help us activate our hamstrings to do the pulling – they are a major muscle that we can utilize here to pick up the foot, which generally only weights about 2% of our total body weight.

Drill #2 – Once we have taught someone to pull correctly, I like doing the same drill with our back about an inch away from the wall. Establish a Figure-4 position first and then practice pulling up; it is recommended that you do at least 20 on each leg in order to emphasize not kicking back. The opposite can happen, where the athlete is driving the knee up and the foot does not end up in the ideal position – this would be utilizing the hip flexors excessively, which would not be the most efficient method of pulling. If you’ve heard runners being sore in their hips, this could be why.

Drill #3 – After doing the drill on the wall (Drill #2) and you’ve established good pulling mechanics, we want to make sure you can do it while moving forward. So the next thing to do is to add some forward momentum to the drill. You can start by running in place and as you move forward slowly, you will then practice pulling just on one side at a time. Do this for 10 pulls on the right foot, followed by 10 pulls on the left foot and followed by about 20 meters of running to emphasize the drills into the mechanics of the actual movement.

Drill #4 – For the last drill that I want you to try out, y0u’ll be using a jump rope. Start by running in place as you are jumping rope. Without even realizing it, you are pulling your foot up exactly where we want it without actually focusing on the mechanics! It’s a natural movement and that’s why we love this drill. Once you feel comfortable with the running in place while jumping rope, you can add forward movement to it and you will see that it looks almost exactly how we want you to look when you are running.

The next time you see running in your workout, practice these drills! These will only take a couple of minutes to complete, so just come to the gym 5-10 minutes early before class. When you get the concept of pulling, you will start to glide and running will become easier – you won’t be using as much energy to get to where you want to!

Nuno! Great work on this blog post – I love the videos and that you were outside!! Plus.. your outfit was color coordinated! Can we do this at Club 7am for the month of April?! Grateful you are our coach and in my life! KR