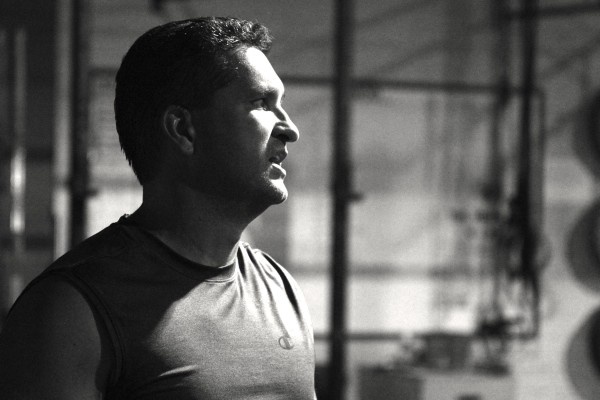 As I sit here, I almost don’t know where to begin telling my story. I grew up with tibial torsion and femoral anteversion, which basically meant I was pretty pigeon-toed (and, in fact, still am somewhat pronounced on my right side). It was significant enough as a child that I wore corrective shoes to bed for a year (I remember thinking they were ice skates), at about age 5 or 6, and also wore different corrective boots to school. I also slouched a lot, which made me look almost hunched-back. As you might imagine, this did not go over well with the other kids, so I spent much of my youth being made fun of for not being athletic. I was never really over- or underweight, but I also remember wearing my shirt out, my belt tight, and my pants pulled up to my navel to hide what I thought was too much chub. This continued all the way through junior high, despite my parents’ best efforts with physical therapy and emotional support, 9 years of AYSO soccer, little league baseball for a year, and little league basketball for another year. I was that cliché kid, always picked last for any team sport. High school was the first place I felt relatively comfortable, as I was a varsity swimmer for three years, and managed to become “the slowest of the fast and the fastest of the slow” relative to my teammates. I’ve had it in my head for four decades that I just wasn’t athletic and there wasn’t much I could do about it, and this has meant I’ve lived with a self-imposed fear of physically performing, especially in front of others.

Three years ago, I was diagnosed with elevated blood pressure and osteoarthritis. My doctor’s advice (to paraphrase): “Lose some weight and try to get some exercise. However, you’ll just have to live with the arthritis.” I did quite well working out at home, dropping from my heaviest weight of 235 down to 205 over two years. However, I plateaued right about there, and, since I wasn’t, as my wife, Carla, puts it, “a gym guy”, I really didn’t know what else to do. She had joined the Invictus family in September 2011, in preparation for the January Tough Mudder, and had been trying to get me to come in and at least observe. I made every excuse, especially telling her that I preferred to work out alone, at home, and had been fairly successful that way.

The truth, however, is something I more recently admitted out loud: I was very afraid of performing in front of others. I figured it was easier to work out alone in the garage than to not live up to both someone else’s expectations and my own; which brings me to March of this year.

After much gentle begging and pleading and talking from my wife (and a good dose of the same gentle persuasion from Shane through her), I came in to observe her and Shane work out. I quietly had no intention of working out, or even joining, wearing an Arsenal tee shirt and jeans that night; but near the end of the evening, Shane and I discussed some of my physical ailments and perceived limitations, and he had me try some simple stretching techniques, which made me feel better than I had in years. After some more thought and discussion and pleading, Carla got me to join for three months, with Shane as my Coach. My goal at the time was to learn what I needed to go back to my garage and hermit my workouts again.

That, my friends, was nearly six months ago. I cannot begin to tell you the physical, mental and emotional changes that have come about since I stepped foot into Invictus and thus into the CrossFit community. Carla and I are “older” parents of two young, beautiful daughters, Sofia (nearly 5) and Madilyn (nearly 3), and I find almost total comfort, relaxation and escape from life’s stresses in being a father and husband, and spending so much time with my family. They provide such unmitigated joy for me, yet I still felt that something was missing, just a little bit; something that was exclusively mine. I have found that something at Invictus, which has helped fill my unrealized longing for something of my own. For 3 hours a week at the gym, and the occasional workout at home, I get to escape from the world just a little bit – and get in shape to boot! Shane is an incredible coach, easily the best coach I’ve ever had, gently (and sometimes not so gently) helping me to push myself further and harder than I’ve ever done physically and mentally.

Shane and Nichole (and the other Invictus athletes whom I’ve not yet personally met) have provided an unbelievable amount of inspiration, and Carla and I are already planning to actually become part of the Sea of Green at next year’s Regionals and the CrossFit Games, instead of just watching breathlessly at home. C.J., the entire Invictus staff, and my fellow Invicti provide a comfortable and inspirational venue to not just get in shape, but change my life. I cannot begin to thank you all enough for what you’ve helped me accomplish, and for what you will continue to help me achieve for the rest of my life!

A few weeks ago, I sent Shane a quick e-mail that I think sums up just what Invictus, and all it entails, has done for me. At the time, I hadn’t even been approached about sharing my story, nor had Shane, Carla and I talked about our testimonials, but it was something I needed to say (I hope he doesn’t mind).

“I just wanted to let you that I had a really good workout last night, especially from a psychological point of view. The last couple of weeks or so have been somewhat stressful for me outside the gym, and I know it manifested itself during my last few workouts (even if you didn’t notice). For some reason, the proverbial clouds parted yesterday, and I felt really good, and still do. I rewarded myself with two new, size LARGE (emphasis intended) Invictus tee shirts last night, one that I’m wearing right now at work. They fit well, and I feel confident in them. Thank you for everything you’ve done for and with me. You and Invictus are the right person and right place at the right time in my life. I can’t imagine taking on any other exercise regimen for the rest of my life but CrossFit, and you’ve helped make that happen. Have a great weekend, and I’ll see you Monday!”

Carla, Pete and Shane; It took me a while to find the words to express myself about these stories. – AWESOME is just one word. I am utterly flattered to have seen you work and grow together. Whitnessed the changes who were only seen in the gym life was even for me a great thing to watch. Carla, you reaching your goals in such short terms and becomming super-woman strong is really cool to hear! Getting that success outside the gym as well makes me smile. Who would ever tought that the gym life changed your life. Pete, the days… Read more »

Thank you, Thijs! I hope all is well with you in the land of excellent ale. I do miss our football talks, especially since the Champions League is underway again, and Arsenal is doing quite well.

Thank you for the support and encouragement, both from afar and when you were at Invictus. The Invictus family has really became a second family for me and Carla.

Wow… beautifully writte by what comes across as a gentle soul and but steadfast warrior as well 🙂 [ I like your rewards prgram; gear is always good] I am happy for you and Carla, but SUPER happy for Sofia and Madilyn– here is to healthy and less stressed parents!What an example you are…. bravissimo! ( I love readin this blog too — stories of courage form everyday people and of accomplished athletes too!)

Awesome and inspiring testimonial. The mental and psychological benefits are HUGE and I perceive to be understated. It all starts with the conversation in ones mind.

Thank you! You are an inspiration.

Though I have been on this site almost daily for the past two years, I have never publicly commented. Both Pete and Carla’s testimonials have touched me deeply for different reasons, even moving me to tears. I am hesitant to post here, but I want them to know how much their candor and bravery mean to me.

As for my observations of the Invictus group, CrossFit associated gyms/owners/coaches who offer such uplifting and rewarding experiences to their clients are to be cherished. Everyone deserves to have this type of journey. Congratulations to you for all the lives you are changing.

This is so awesome!!! Stoked for you, Pete!

Such a great story, thanks for sharing. Congrats!