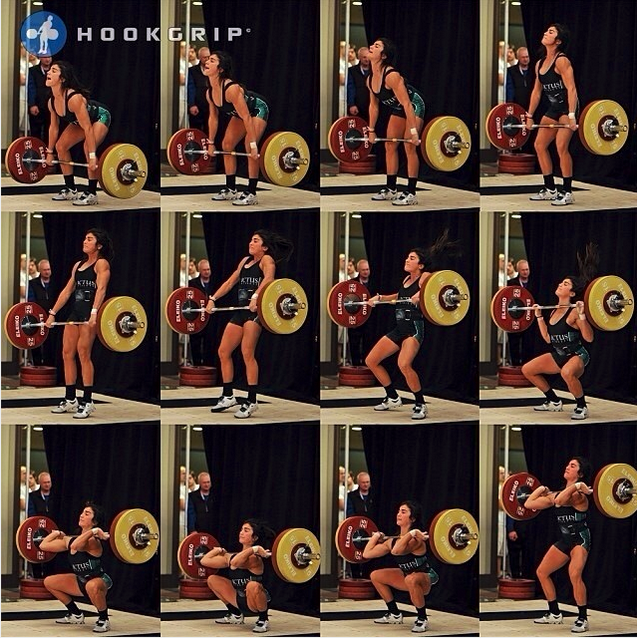 Olympic weightlifting has become a huge part of the CrossFit world. The sport of Olympic weightlifting, which was unappealing to many athletes prior to the evolution of CrossFit, has grown immensely and has tons of participation from athletes around the world. With growing participation in the sport along with the growth of social media, videos and photos circulate every day of someone’s new personal record in the clean and jerk or the snatch. With more and more people striving to lift more and more weight, some common faults are accentuated, such as the early arm pull shown in the photo on the left.

I like to think of the Olympic lifts in a very simple manner:

These four steps sum up the basic sequence of the snatch or the clean. Obviously there are a world of cues out there; but to simplify the two lifts, we are basically jumping and landing. The hips extend, the shoulders shrug, elbows come high and outside as we begin to pull ourselves under the bar (versus pulling the bar up to us). For the clean, we have fast elbows as we catch in the front rack; for the snatch, we have a rapid punch as we receive the bar overhead. Although we practice the high pull as a skill transfer drill, it shouldn’t actually happen during the snatch or clean and jerk. The “high pull” is actually the beginning of the athlete pulling themselves under the bar and NOT them pulling the bar to their shoulders or overhead.

Now that we’ve discussed the basics of the two lifts, let’s get to the point of this post.

In order to be successful and efficient in the Olympic lifts, we must follow those four steps in order. The sequence is very important! However, the most common fault we see is that the “pull” is taking place before the hips extend. Knowing this, the best cue in Olympic weightlifting is PATIENCE!

Here is an analogy I will throw your way. In football, when a running back receives a handoff from a quarterback, very rarely does he simply run forward. This would be like gripping and ripping a barbell off the floor. Running backs are usually smaller athletes who are very fast, agile, and strong, but not as strong as the lineman they are running behind (this is the musculature of the upper body). The running back must wait for the big, strong lineman to get a push and/or develop a hole for them to run through. Once this happens, THEN they can accelerate and gain some yards.

The same holds true for Olympic weightlifting. We must wait for the legs to push into the floor and the hips to violently extend before we begin to pull on the bar. As the amazing Coach Burgener says, “When the arms bend, the power ends.”

So next time you are practicing your Olympic Lifts, let your big strong legs work first, be patient and THEN pull on the bar. Patience goes a long way in Olympic Weightlifting.

Here are a few things you can do to allow yourself to be more patient.

Good things take time and if you are looking to lift more weight and hit new PRs, patience is an absolute must. Get out there and give these exercises a shot and see your Olympic lifting reach new heights!