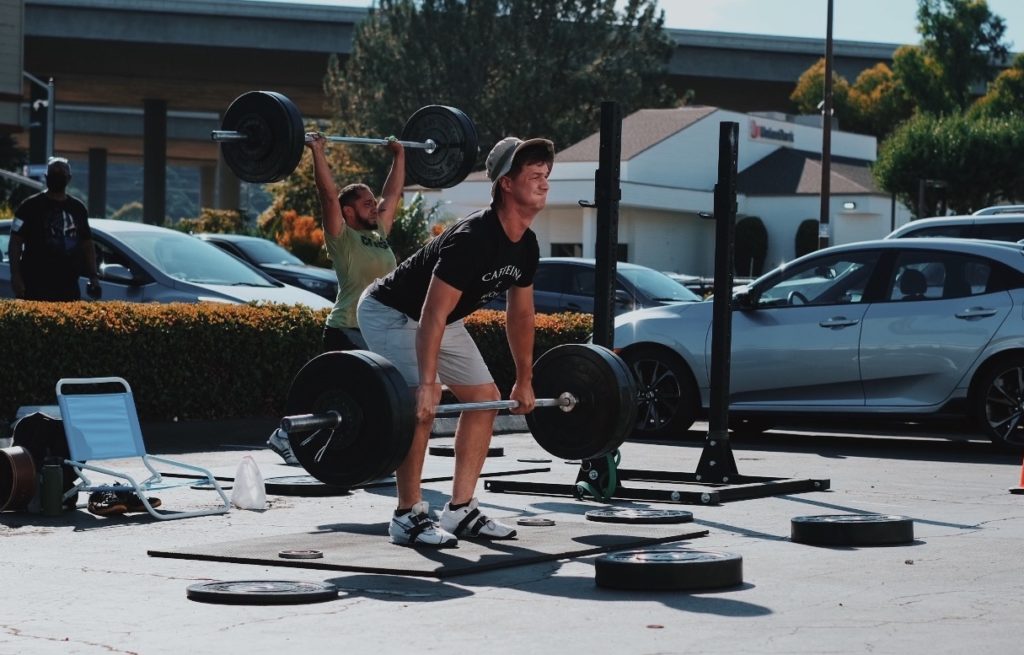 Noah joined Invictus in 2016, after getting stationed here for the Navy. He had just started doing CrossFit with a friend and was hooked on the level of coaching he received at Invictus.

Originally at the Point Loma and Downtown locations, Noah expressed interest in Olympic lifting to Coach Kirsten about a year after joining. He started attending the Oly sessions shortly thereafter and said, “As I started to get better and better I realized that I just really loved having a barbell in my hands.”

At Invictus, the coaching staff is so good at highlighting the strengths of the other coaches, even at the opposite location. Coach Fritz knew about Coach Ricky’s Oly program at Sorrento Valley and the success that Ricky has had at qualifying athletes for higher level weightlifting meets. So, Coach Fritz recommended that Noah head up the street to the SV location. Noah says, “As soon as I came to SV all of the Oly crew was very welcoming and Ricky was so involved and intense and I just loved the energy. And I knew right then that it was what I wanted to do. I wanted to compete in Olympic lifting.”

Ricky knew Noah had been a longer-term member of Invictus, but didn’t know much about him until he started coming up to Sorrento Valley. As soon as Noah told him his goals, Ricky knew that he could help him be competitive in the sport. The biggest obstacles for Noah were going to be refining his technique and getting confidence approaching heavy lifts.

Noah says, “Coach Ricky has been amazing ever since I joined the SV Oly crew. He has made so many changes that have drastically helped me to improve my lifting. He has 100% made me way stronger physically and mentally, and I can honestly say I have never felt this good about anything.”

Noah’s goal to be a competitive weightlifter came to fruition as he qualified for the American Open Series 3 with a 210kg Total and in 81kg weight class. He’s super proud of the progress he’s made in such a short amount of time. “This is my first year of being really serious about Olympic lifting and I already qualified for AO3 which was very exciting for me.”

The dynamic between Ricky and Noah is like brothers who are best friends. They bonded immediately over being Florida-natives who ended up in San Diego for the military. When you ask Ricky what he’s most proud of with Noah, he says, “Other than being from Florida? I love that he’s fearless. He’ll die for the lift.”

While Noah hopes to make it to Nationals, he’s just enjoying the journey and where it’ll take him. “I have never felt more a part of something ever in my entire life, Invictus and my Oly Team make me feel like I’m part of a family and I am so thankful for that,” he says.

The last thing he wants to add….

“Also have to give a shout out to my Oly crew team (Nairobi, Brad, Cynthia, James, Ashlie) for motivating me and pushing me to be better every single day!”

Good luck to Noah and the rest of the Invictus San Diego Weightlifting team as they compete in the American Open Series 3 hosted at Sorrento Valley September 18-20, 2020.