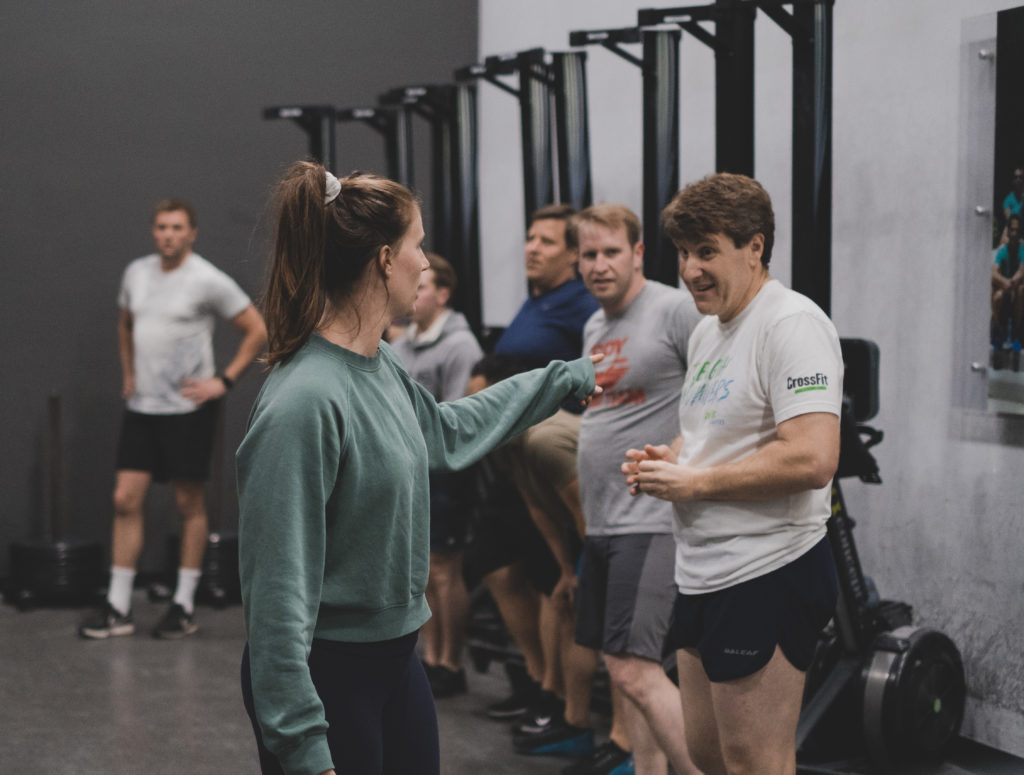 Burpee Penalty? No Thanks.
Written by Libby Landry

It’s 5:30pm, I bring everyone into the whiteboard to denote the beginning of class. I greet today’s participants, ask how their day is going, how they feel from the week, maybe even throw out a Question of the Day. It’s 5:31 and two more have shown up. The warm-up begins, we’re doing some dynamic range of motion and another body sneaks in, hoping to go unnoticed. Now at 5:37, we’ve moved on to the specific warm-up, partnered up to share equipment, and three more have since joined. By 5:42, the class has doubled in size. Whoa, where’d all of you come from?

Should latecomers receive a burpee penalty?

Imagine that the mom with two kids and a full-time job is en route and then one kid puked all over the car. Or, the newly-promoted manager ran into his boss on the way out of the door and asked him to finish something that’ll “just take a minute.” Or, the police officer who worked a 12-hour shift and got stuck in rush hour traffic, but wanted to workout before sleeping the entire day.

So much life happens outside of the four walls of the facility. Our goal, as coaches, is to improve the health and happiness of our members. To promote community, create a safe space, put them around other adults to talk to, keep them fit for their job, lower their stress levels, whatever it may be. Giving a punishment for being late is counter-productive to the values we all operate from. For many members, this is the one block of time in their day that they have to be selfish.

There’s certainly a case to be made for being on time to a workout session. A proper warm-up ensures the safety of the member, especially on technical lifting days such as snatches. Being included in the intro and warm-up fosters a deeper sense of community as it’s often a time to talk amongst each other, laugh about a funny answer to the question of the day, introduce a new member, and make gym announcements. Plus, members pay for an hour-long session and we want to give them an hour-long session (that also means you need to start on time but that’s a post for a different day…).

However, while some coaches believe a burpee penalty to be an effective behavior-management tool, there’s evidence that suggests this might discourage the behavior it is intended to elicit (to get them to exercise!). Using positive punishment – that is, adding in something unpleasant meant to decrease likelihood of a future behavior – is likely to be embarrassing to the member, and discourage them from attending future sessions, on time or otherwise.

When promoting healthy lifestyles as we’re trying to do with 99% of our gym populations, it’s important to maintain physical activity as a positive experience rather than a negative one. With too many unknown factors in the given individuals day, “teaching” punctuality via a burpee punishment isn’t likely to be very effective.

Coaching Strategies for Latecomers to Class

So, what do you do? If someone is late to class, here are some strategies:

Regardless of the option you employ, show some compassion. Life happens. So much life happens. And their session, whether that’s an hour because they’ve shown up on time, or 48 minutes because they were late, is still THEIR TIME…their time to escape, their time to do something for themselves. Remember that especially for the person showing up late, just making it into the gym that day may be a win. A burpee penalty could ruin that.

Thank you for sharing this useful article information. I am really impressed with the article you provided.
powerline io