Learning from a Muscle-Up Attempt
Video Analysis by Travis Ewart

We wanted to share it with you all because his explanation is gold and he even took the time to screen shot her video and doodle-analysis on it to better describe what he’s talking about in his coaching notes. This is the level of effort you can expect from Coach Travis and his cues are always spot on for correcting faults or getting athletes to move in a certain way.

These are the comments Travis left under her post in the Facebook group. As you can see, there’s a ton of coaching that can be virtually and for the benefit of multiple athletes! 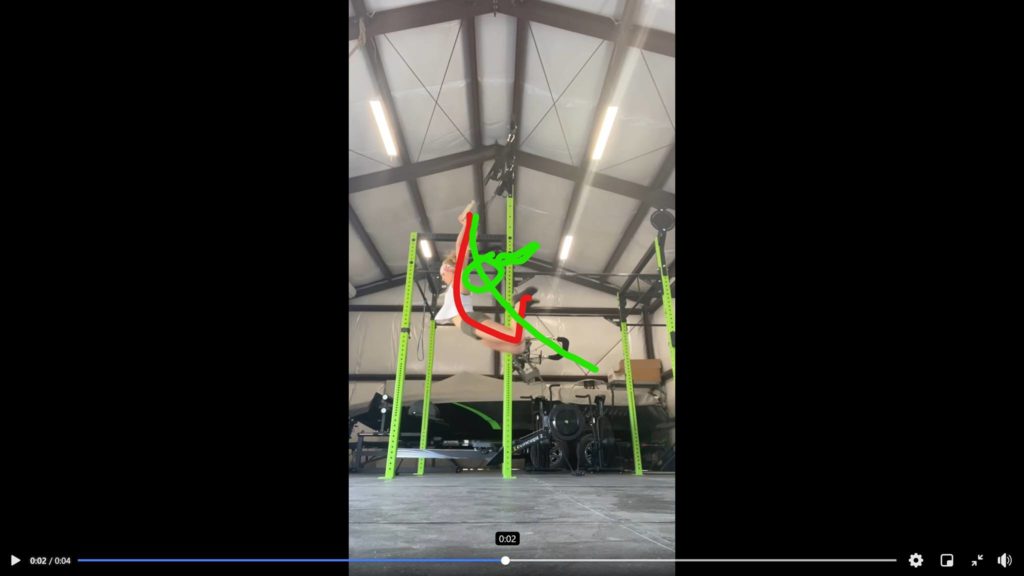 First thing’s first, the backswing is pretty bent up. Keeping your body stretched and trying to stretch your feet away from the rings will actually create more momentum into the forward (next) part of the swing. When your feet go this high, it’s safe to assume that they are going to be whipping up in the front as you go to transition, and since the goal is to keep your shoulders above the rest of your body, this is only going to make keeping your lower body beneath you more difficult.

Though your feet and legs will be lower during the backswing with a straight body, you can create more momentum in your forward swing AND less speed in your feet which will ultimately help you keep your lower body lower, and your upper body higher than your upper body. I know this is a weird concept, but if your feet are whipping up in the front, it’s going to lead to an angle of a sit-up for the transition that is really difficult to finish (you’ll see what I mean below). 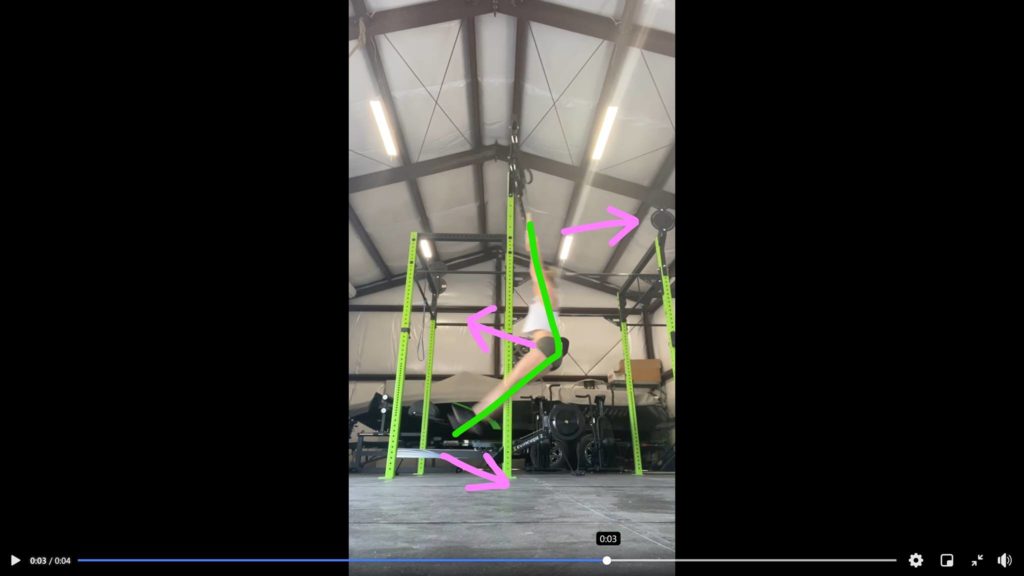 This next picture is where I want you to try to actually initiate the transition. That means that during the forward swing, when you hit this position, I want you to drive your straight legs backward behind you, the hips forward, and pull backward on the rings as much as you can. The goal here is to stop the feet abruptly (so they don’t go high in front of you), the hips will rise because they extend, and the backward pull on the rings will send your shoulders forward and upward to where you’re going to want to finish the transition. 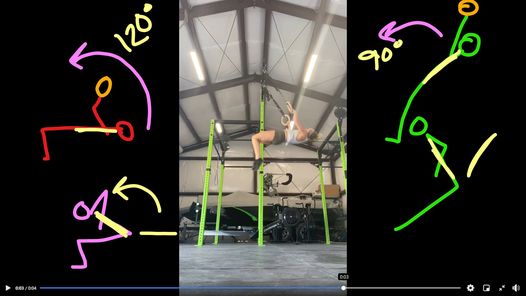 Here is where it seems your hips are fully finished extending. There’s a lot to unpack about this position, but the main thing to consider is the amount of rotation your upper body is going to need to make in order to get over the rings where you can support yourself.

On the left I attempted to draw the angles for you, and from my perspective you are going to have to do about a 120 degree sit-up to get into position…and that takes a lot of time. Additionally, because your legs are bent you don’t have the long lever of an extended set of legs to use as leverage for your sit-up. Keep in mind that it’s easier to sit up fast from a lying position on the floor than it is from a bent knee or tucked position. The extended legs bear more weight further from your hinging hips, thus are more difficult to move, and that means that your upper body won’t be able to effectively sit-up as easily or quickly with bent knees (which is actually why you see people who do muscle-ups in this position always kick their feet out and upward to finish the transition, and sometimes those feet kick higher than the rings for a no rep).

The figures on the left are what I’m ideally looking for. I know that it is a bit of an exaggeration of what I really expect, but this is what I want people to picture in their heads when approaching the muscle-up (to avoid the typical issue you’re having). Obviously the lower body is staying lower, upper body isn’t leaned back as much, and there will be much less rotation to get over the rings, which is great from a movement standpoint because it’s much less degree of rotation, but less degree also means less time.

One thing that you can think about that will probably help a lot, is try to look straight in front of you, at the floor, about 20 feet out, and try to watch this spot on the floor throughout the entire muscle-up. Keeping your head in this position and able to see that spot on the floor should help your upper body stay more toward the vertical position rather than leaning back toward horizontal. 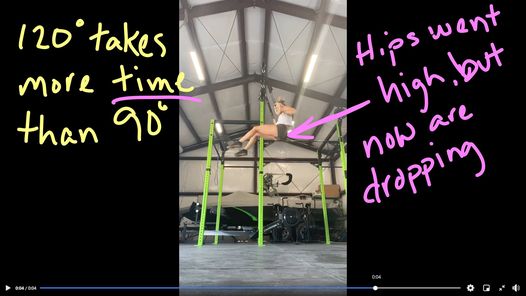 The Invictus Gymnastics Program is geared towards all level of athletes. The program consists of drills to help athletes improve in skills often seen in CrossFit, like handstand walks, muscle-ups (bar and ring), handstand push-ups, pistols and more. The program will help athletes not only improve their current gymnastics skills but will also help them become more efficient in their skills to avoid injury. And don’t worry, the sessions are broken into levels (Level I, Level II and Level III) so you can choose which level best suits you. The sessions can be added as a supplement to your current training program three days per week or as a stand-alone program.