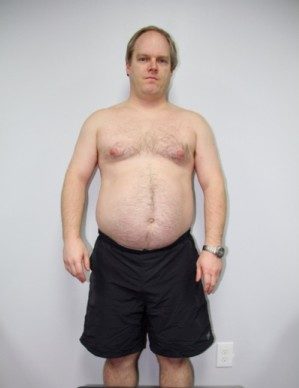 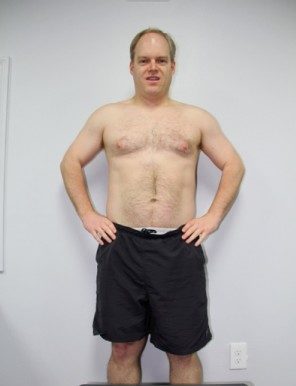 Last week the competitors of the 2012 Look Good Feel Good Challenge voted for their winner, and by a landslide, chose Chris K as their champion! Seeing as how I got to coach Chris on his initial fundamentals back in April 2010 and work with him in the Nutrition Coaching Group, I wanted to be the one to sit down with the champ and get his side of the story on the Challenge.

From the get go, Chris was in it to win it!  He made the decision early on to do whatever it would take to win the top prize of $1000 and three-months free membership.  This was actually Chris’ second Challenge at Invictus, but his first time produced little in the way of results due to inconsistent attendance (Chris was doing a lot of “Long Slow Distance” training for triathlons) and a lack of direction for his nutrition.

Chris knew that he needed a different approach if he was going to succeed in the Challenge.  No longer training for triathlons and endurance events, he took a three-pronged approach to his fitness:

While Chris was no stranger to training, he really needed some assistance on the nutrition piece.  Enter the Nutrition Coaching Group.  He felt like it was designed with his success in mind.  The lessons, habits and meal planning all helped to take his (bad) decision-making process out of the equation and give him the direction he needed. Though it wasn’t all that easy.

Chris was initially hesitant about some of the coaching advice.  There’s so much conflicting information floating around on the internet, and Chris was trying to implement what he read from “the experts,” whether it was the body builders touting the benefits of drinking milk everyday, or nutritionists and medical doctors advising 3-5 servings of whole grains a day.  But he eventually gave in, and while not totally intellectually sure about the primal eating concepts, he has been doing it and finding great results! 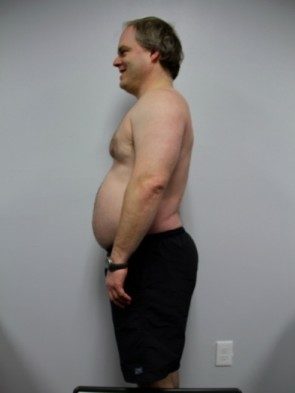 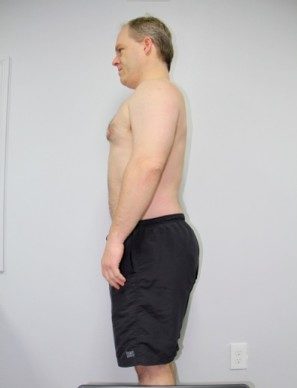 The Hardest Part
Preparing meals and working with real food (as opposed to something in a box he could keep on the shelves for months) was a real challenge. Because the food would last only a week, at best, before spoiling, he had to go shopping more often and do a better job at planning. His solution – Cooking with M! He took three of Michele’s cooking classes to learn the basics of prepping food for the week, ideally things he could refrigerate or freeze.

Being a former binge-eater, he thought cravings might become an issue. Chris was pleasantly surprised by how satisfied he was with eating “real food” and didn’t find the cravings to be unbearable. If he did have a craving, he had a little bit of fruit and nuts available and it always did the trick.

The Difference Maker
While Chris gives a lot of praise to the coaches and other members of the Nutrition Coaching Group, he credits his co-workers with keeping him on the straight and narrow. Fellow Invicti Annette W. and Marty R. supported him through the entire Challenge. As gratitude for their support Chris has promised to use some of his $1000 winnings to take them out to lunch.

The Future…
Even though he doesn’t completely understand how or why the nutritional advice he received produced those results, Chris plans on building off of the progress he’s made and wants to reach the 200 lb mark by the end of the Summer. He knows that the expectations for his continued success are high, but that he also has a strong support network here devoted to his achievement. And his advice to anyone else looking to make a dramatic change in their body composition: “Eat real food. It is more satisfying than what you would expect and actually helped curb the binge eating.” 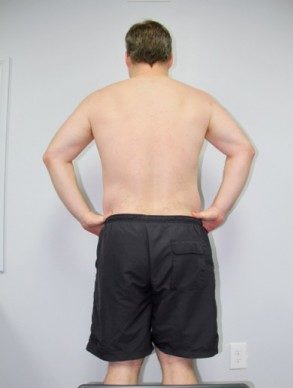 Way to go Chris! Keep up the good work!

Great job Chris! What an inspiration and a demonstration that hard work will help achieve any goal 🙂

Your good energy and smile are a big part of your success. Keep it going with your goals!

Thank you to everyone who kept me motivated, both in the gym and outside!

Way to go Chris! You’ve made amazing progress, can’t wait to see where you go from here.

Congrats Chris!! So proud of your hard work! Look good, look good really paid off for you!!

Great job Chris! Now throw away that last box of cereal that you’re not going to eat anyway 🙂

I am so proud of you.

Woohoo! Great job Chris 🙂 We will continue to support you.

Congratulations Chris! Your hard work (and confidence in our smart coaches 🙂 ) has certainly paid off and you look amazing!

Great Job, Chris!! You worked hard for it. Congratulations on making the change to healthy eating. You look great!!