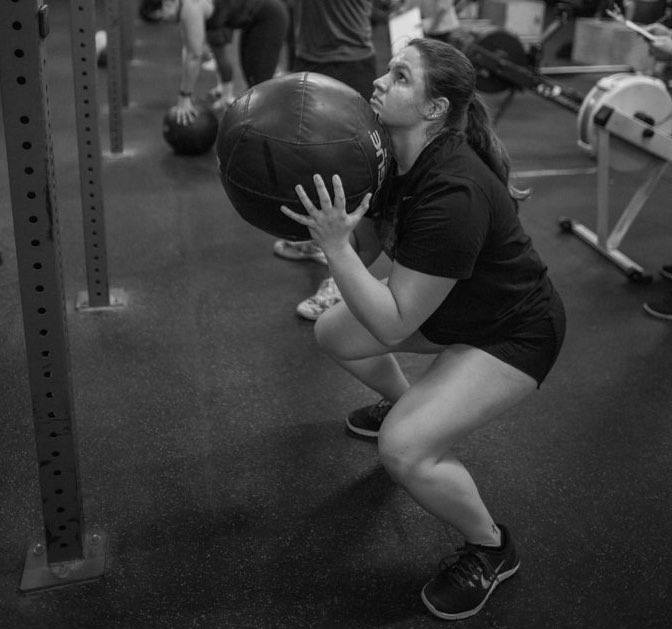 The same concept that drew her to her major – molecular and cellular biology – is what drew her to CrossFit. “The idea in science in general is that there’s a lot of unknowns – you have the ability to learn more and contribute to the understanding of the world around you.”

Lori Winter was a swimmer in high school, and although most people would consider swimming a lifelong sport, after high school, she began looking for something different; something she could “do for the rest of her life”.

It may seem odd to some that CrossFit is what she chose to pursue but after she began to explain, it made perfect sense.

“With swimming, you get up early and go to the pool to train mostly by yourself. I knew it would be hard to make that transition without the competition piece included. I can still go swim, but to the same level, probably not alone.”

Enter CrossFit and it’s community, push and guidance. And, of course, the many challenges – even for someone with athletic prowess. CrossFit was the first time that she looked at a sport as “something she couldn’t do YET” instead of “something she couldn’t do”. It had the unknowns and gave her the chance to learn and contribute to not only her growth, but the growth of others. Kind of like that science stuff she’s into.

What a great summer it was! The community at her gym back home in Colorado was exactly what she was looking for to fill the void of no longer being a part of a team. And then it was time to head off for her freshman year at SDSU – stepping out of her comfort zone for the first time to go live in a city where she didn’t know a soul, too far from home for a quick visit to see a friendly and familiar face.

She didn’t join a CrossFit gym during her Fall semester, opting to go to the campus gym instead. But it didn’t give her fulfillment to workout there alone, the opposite of what she was looking for after her solitary swimming career.

After a visit home over Christmas break and catching up with her old gym coaches and friends, she was convinced to take that second of many steps out of her comfort zone to check out Invictus for the first time.

“I was so nervous at first because Invictus is known as being a big gym. But it never felt like that – everyone was so welcoming and there was a huge sense of community. The coaches are the best in the game and they, and other members will back you, especially if you tell them your goal.”

One of her core values is to always push herself and what she thinks are her limits.

“I found that the more I do it (putting myself out there/stepping out of my comfort zone) in the gym – the more I can do it outside the gym.”

She actually looks forward to training at 6 a.m. and pushing herself through what she thought were her limits with her fellow Invicti.

“Those changes in mindset have made me happier overall – give me something to look forward to.”

Whether it be moving to a new city, alone, as an 18-year-old; joining a new community at Invictus; or participating in Friday Night Lights for the first time, she’s game for the challenge!

Her first experience with the Open was last year, but in class, and not under the lights at a large event with a huge crowd like the Invictus Friday Night Lights. But her coach, Kim, talked her into giving it a try, to push herself, and she reluctantly agreed – stepping out of her comfort zone once again.

She admits that she was nervous all day Friday. She had never had done a FNL or a CrossFit workout on a stage and didn’t know if she was ready.

“Since you never really know the workout until the night before, it made me worried that what if movements come up I can do yet? How can I do FNL if I need to scale? And with other people watching?”

But she showed up, ready to give it her full effort. It turned into a night of firsts.

She admittedly has always struggled doing wall balls unbroken and arrived at the gm thinking she would scale workout down to a 10 or 12 pound ball but she was quickly talked into trying the Rx weight by Kim and her judges.

“Why not? You never know if you try.” (Stepping out of her comfort zone, once again.)

Her goal goal was to hit 5 rounds – something she knows she wouldn’t have been able to do it outside of FNL because of the support of the community. And she crushed that goal – WITH the 14 pound ball for the entire workout!

“The last 30-60 seconds of FNL – you can push harder than you ever thought just because of the atmosphere. I’m really glad I got out of my comfort zone – I never thought I could do it!”

She immediately committed to participating in all of the Open workouts – so no matter what comes up, she’s devoted to trying, even if that means scaling.

“What a great way to show others that what really matters is that you’re pushing yourself and your mindset.”

She feels more comfortable doing the rest of the FNL now because she realized that the community just wants to see you succeed, no matter if you have to scale or how fast you go. Maybe it’s the mutual suffering. Even if you finish before someone else – it’s about going to cheer on that person who hasn’t finished yet and you’ll be just as happy for their score as yours.

“It’s a battle with yourself instead of other people and even your competitor will even support that.”

That mentality has poured over into her personal relationships as well. Her inspiration (and competition) growing up was her older sister. They both always did sports and were super competitive with each other.

“We usually tried finding our own things, but ironically, now we are both doing CrossFit and it’s cool because we can talk about the same thing. The rivalry is still there but it’s different, more supportive now. I think it has more to do with the community of CrossFit than maturing.”

So what can we learn from this super sharp, 18-year-old who has “Pay the man”, a Josh Bridges quote (she’s a huge fan of his), plastered on her dorm room wall?

Put yourself out there! Get out of your comfort zone!

“So many people are afraid to take that first step – but you have to keep taking it and getting used to stepping out of your comfort zone – CrossFit is great for that!”

Find that one person to push you.

“I used to be nervous about going to a big gym because there are so many people but now that’s my favorite thing. I meet someone new every time I workout and they always push me, as do the coaches.”

Find yourself a community that you are excited about being a part of.

“Invictus is a big gym but can feel small. I can walk into a class with 30+ people but it still feels small because everyone knows each other’s names, everyone is cheering for each other, the community can’t be replicated. All I can recommend is to go try it.”

Coach Kim’s Note: I moved to the Downtown location about a month ago from our Point Loma location and Lori was one of the first members of the original 6 a.m. Downtown crew that I had the pleasure of meeting. She always has a smile on her face and is an absolute pleasure to coach. Just like she expressed above, she is always willing to try new things and last Friday night was no exception. She was only slightly hesitant about using the 14 pound ball but with a little encouragement, she pushed through all 15 minutes of that workout and had an amazing performance. I can’t wait to see what she can do in the next four weeks!