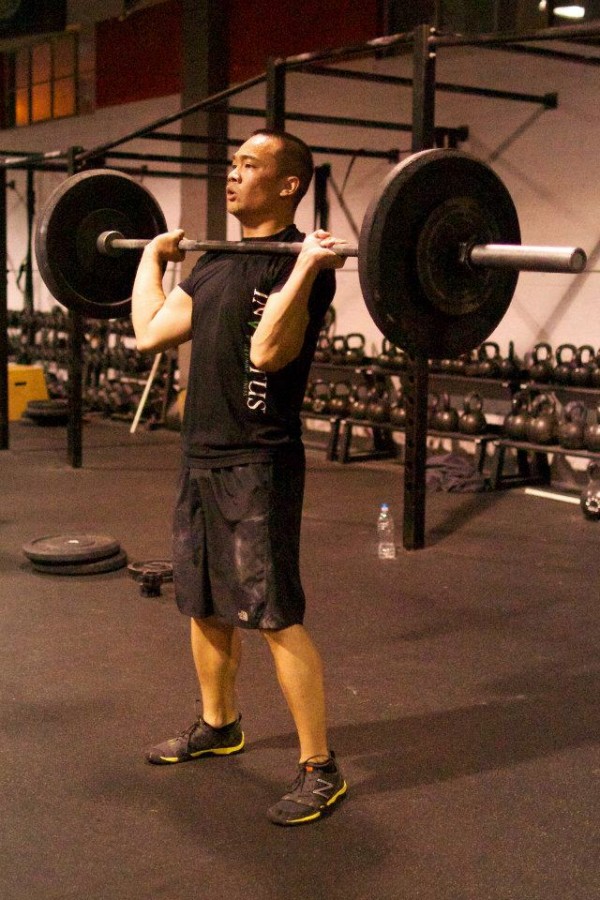 How long have you been a member of Invictus and who influenced you to join?

I have been a member since January of this year. I was always curious about crossfit long before I joined. I had always been the guy to do the “Bi’s and tri’s and chest and back” workouts at a globo gym following suit with aggressive grunting and tight v-neck shirts. I still try to sneak in v-necks once in a while at Invictus. I was getting really bored with my workouts and didn’t seem to be making any progress. Working out wasn’t fun for me anymore. My roommate, who is also a member, knew Nichole from Invictus and she invited us to Bring a Friend Day in December of 2011. I still remember the workout. It was a partnered workout that included 800 meter run, 50 pull ups, 50 pushups, 200 air squats, and ending on 800 meters shared with your partner. I remember thinking, “This isn’t too bad.” After the 50 pushups, I was lying on the bathroom floor near the toilet, puking. That’s when I knew this was definitely for me. I signed up the next week.
(CJ’s editorial note – I actually flinch when people tell me that they vomited in their first workout – it’s definitely not what we strive for, but knowing Jason, it does not surprise me that he came into Invictus giving 110% – i.e., at least 10% more than was necessary on day one.)

You recently achieved a huge PR – care to tell us about it?

Yes! I had never been able to do a muscle-up. For months, I would practice with bands, watch instructional videos, and attempt on the rings, only to ALMOST get there. A few Fridays ago, I had the opportunity to workout with Tino, Shane, and Cody in a workout that included muscle-ups. Before coming in I was already thinking about what I could replace muscle-up’s with. As I was discussing this with Shane, he encouraged me to just give it a try to see what it looks like to give me pointers. Tino gave me some tips to keep my arms straight and aggressively kip and I got it on the first try! It was an amazing feeling. I am pretty sure I saw doves fly up from behind me with church choir music. Thanks again to Tino and Shane for that amazing day!

Everyone at Invictus seems to have a favorite group time to train – which one have you adopted as yours and why?

That would be any class that has fellow member Mr. Jonathan Biber. We work together well because his strengths are my weakness and vice versa. We also know how to push each other to maximize our workouts. I also notice that anytime Michele coaches, she has 90’s dance music on. Some people like to work out listening to Rage Against the Machine. I’m more of a Real McCoy type of guy.

It’s rumored that you are a huge fan of romantic comedies; care to tell us about the one where a boy sees a girl from across the gym and then sparks fly?

Yes I am! And if anyone tells you that “The Proposal” is the best romantic comedy ever, they are wrong. I mean, come on, it’s impossible to fall in love with someone, that you initially hate, over a span of a weekend. The best romantic comedy ever is “Serendipity” with John Cusak and Kate Beckinsale. However, my favorite romantic story is that I met my girlfriend, Tara Parsons, at Invictus. I am sure most of you know her. She is a member and a massage therapist that treats almost everyone from Invictus. If you haven’t had been treated by her, you should. She’s amazing at what she does. I remember one of the first times I met her. It was during one of the Friday Night Lights events that we had during the Open. One of the workouts included pull-ups. I remember seeing Tara run to the bathroom to tape up her torn hands after ripping only to get back on the bar and finish the workout. At that point, I knew I had to get to know her better.

You’ve had a very interesting 2012 so far! Joining Invictus, meeting Tara, getting your first muscle up – and being the roommate for our very own Belgian import, Thijs! You must tell us what the experience was like!

Ah yes . . . living with Thijs! If you were not here when Thijs was here, you missed out. He was visiting for a few months from Belgium on a school internship with Invictus from March to May. I had the privilege of being his roommate his last two months here. He was a lot of fun to live with. He would cook awesome Paleo-friendly meals for me and my roommate and give us a lot of cooking tips since all I could cook before was chicken with Bitchin sauce. I could write pages of our fun time together going to NBA basketball games to singing Karaoke. He is one of the smartest and most driven individuals I have ever met. He has his own affiliate in his garage and is currently planning to move to a larger location with more equipment and staff after he graduates this summer. I am so glad I was able to spend so much time with him while he was here. If you haven’t met him, he’ll be back next summer to visit for a few weeks! Make sure to introduce yourself. To sum it all up, I am going to give you some top Thijs moments and things we all probably miss about him.

1. Me: “Do you watch basketball in Belgium?” Thijs: Yes! We love watching American basketball. We watch this show called “One Tree Hill.” I couldn’t stop laughing that whole day.

2. Thijs losing his voice after day 1 of Regionals from cheering so much. It took him the whole week to get his voice back.

3. Doing food prep with Thijs while singing “No Diggity” by Blackstreet. That’s when I knew we had to get a group from the gym to do karaoke, which I think we should make a monthly Invictus event. Jaimie, can you make that happen?

4. Doing Karaoke at the Lamplighter and singing “I Want It That Way” by the Backstreet Boys.

5. Last but not least, I think we will all miss those colorful board shorts walking around the gym. I didn’t think they made hot pink and lime green board shorts.

Thanks so much Jason, we love having you as part of the Invictus community!

FYI…my rack position is much better now! This was taken when I first started.

Thanks for the shameless plug babe:) I’m so glad to know somebody noticed those damn chest to bar pull-ups! Totally worth my hands ripping:)

So I had this discussion with Jason regarding romantic comedies earlier this week. While I haven’t seen Serendipity, I can say that the Proposal is among the top 5 favorite rom coms ever! (along with 10 Things I Hate About You and The Holiday). I guess I will now be watching Serendipity this weekend!

One day I hope to have upper body strength like you do! Great article about a great guy. Luckly to have you as a workout partner and friend!

Jason, man – you know I heart you and all but I still stick by my guns about The Proposal – no matter what Cody Burgener says.

Very nice! Jason, wasn’t it your Invictus shirt that we found one morning on a hike up Kwaay Paay Summit? Stripper! 😉

Any friend of Tara’s is good people in my book!

Yeah that was my shirt…it was sooooo hot that day!

Haha…such rad memories of Thijs and a great interview from Jason! Congrats on your muscle up and all your progress 🙂