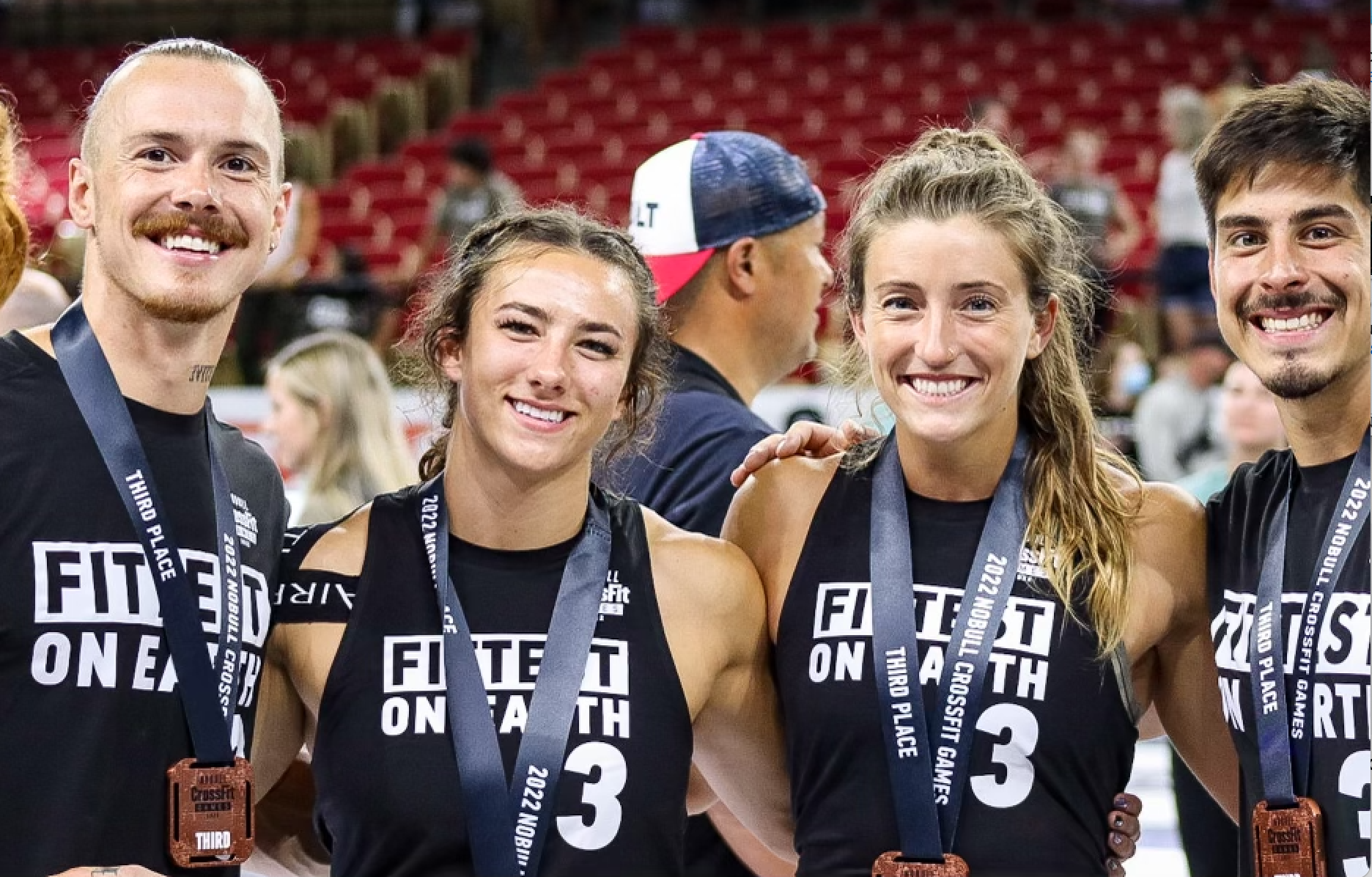 It was a podium finish for Team Invictus taking a hard fought 3rd place finish at the CrossFit Games against some other amazing teams. A huge congratulations to Josh Al-chamaa, Devyn Kim, Brittany Weiss and Jorge Fernandez, as well as to their phenomenal coaches Hunter Britt and Holden Rethwill.

For more thoughts on the week, including exclusive and behind-the scenes photos of Team Invictus and our Masters Athletes in action, follow us @crossftinvictus!

How Did Team Invictus Perform on the CrossFit Games Workouts?

Day 1 began with “Biker Bob” where teams would experience a bike course for the first time ever at the CrossFit Games. Mixed in with the bike course were a sled push and synchronized toes-to-bar. Team Invictus was able to showcase their months of odd object training and ability to adapt to the bikes by placing 5th in the first event. The highlight of the event was the photo finish between Team Invictus and CrossFit Reykjavik, where they were able to edge out CrossFit Reykjavik by 1 second.

The second and final event of the day took place in the coliseum, where Team Invictus took on “Pegs & P-Bars”. This event would challenge our athlete’s gymnastics skills with a brand new movement to the CrossFit Games, parallel bar dips. They moved well as a team through this workout and placed 7th just ahead of CrossFit Oslo Navy Blue.

Day 2 allowed Team Invictus to showcase their strength and speed. The first event of the day was a max lifting test of a jerk and front squat. BIG shoutout to Jorge who front squatted 435lbs on his last lift to give Team Invictus a second place finish!

The max lifting event was then followed by a 3-mile relay sprint for the teams. The teams would run the first mile as a group and then the next 2 miles in pairs of their choosing. Brittany and Devyn showed off their speed by running the anchor leg for Team Invictus. They were able to hold off a bunch of other teams and secure a top 5 finish to end Day 2.

Day 3 started with a bang for Team Invictus, where they would finish 4th in “Muscle Pig”. The event allowed our athletes to show off their brute strength through the alternating pig flip part of the workout. They also show their proficiency with synchronized muscle ups, which caused many teams to stumble and finish outside of the time cap for the workout.

The final event of the day was “Handstand Machine”. This workout had two new handstand movements including a freestanding handstand hold and block HSPU. Team Invictus worked through these new movements to cap off day 3 with a 10th place finish.

Day 4 is where Invictus made their move to secure a spot in the top 3. Beginning the day with “Rinse & Repeat” Team Invictus would ski and swim their way to an 8th place finish. The second event, “Dumbbell Highball” was a relay with male/male and female/female pairs alternating through dumbbell snatches and lunges. Invictus showed off their work capacity by finishing 4th with a time of 23:45.

In the final event of the day, Team Invictus flexed their muscles once again with a second-place finish. The “Payload” was a mix of synchronized double-unders and strongman carries. The highlight of day 4 came from this workout when Team Invictus was able to win the Big Bob push race at the end of the workout to edge out CrossFit Oslo Navy Blue by just under 10 seconds.

The Final day of the Competition was one that you did not want to miss! Team Invictus came ready to fight. The first event was “Team 2-2-2-2” with an EMOM-style workout where teams were trying to accumulate 175 total overhead squats. The highlight of the weekend came from this workout where Team Invictus was going to head with CrossFit Mayhem and sporting legend Rich Froning. Our team did not back down and fought Mayhem to the end of the workout, which led to a sprint finish ending with Mayhem in first by just one second. This was by far the most Mayhem was challenged throughout the weekend and set the tone for a strong finish.

The final workout of the competition was “Echo Worm” under the coliseum lights. This was a true test of our team’s work over the year, where they could show off their comradery on the worm and ability to work as a team with synchro gymnastics. Invictus put up a great fight and closed out the weekend with a 7th place finish.

After the dust had settled and the awards presentation began, Invictus was standing on the podium in third place! They finished the weekend with 951 points and were one of only two teams with all of their finishes inside the top ten. We want to give a huge congratulations to Devyn Kim, Brittany Weiss, Josh Al-chamaa, and Jorge Fernandez for all of their hard work throughout the year to represent the Sea of Green.

Who is Team Invictus?

Unlike the super-teams who recruit athletes from near and far in order to contend for the title of “Fittest Affiliate” Team Invictus is a true “affiliate” team whose members have grown from within it’s system. Devyn Kim is a 2x Invictus Teen Games Athlete and was a member of the Sea of Green team in 2021. Brittany Weiss moved to San Diego years ago to coach at Invictus while continuing to develop her athletic prowess. After years of work, she joined Team Invictus last year. Jorge Fernandez walked in off the street because he thought “it looked cool” and was looking for a competitive outlet after finishing a successful college baseball career at SDSU. With years of ties to Invictus, Josh Al-chamaa moved to San Diego at the end of last season to join us in person to train for their common goal – a Games podium finish in 2022.

One of the benefits of being an in-house Invictus Athlete is that you get special treatment – Mama Karen takes care of you, you have on-site options for recovery and supplements, you receive individualized supplemental programming based on your weaknesses. But anyone can get most of that by following the Invictus Athlete program if you are aiming for Semi-Finals or Games or the Competition program if you are more of a local level competition athlete and/or want to see if you can make it past the Open.

Invictus Athlete – Our athlete development program is designed to effectively push athletes to achieve their competitive goals. We provide a primary and optional training sessions each day, and guide athletes to address their weaknesses and continue to improve in the sport of fitness. The program is designed so you can choose from different components based on your training priorities. It gives you the ability to perform multiple sessions per day if you choose. The methodologies used in this program have been tested for more than 10 years within the walls of our gym in San Diego, as well as with our private remote clients around the world and the results speak for themselves.

Invictus Competition – Our Competition Program is designed for the recreational athlete who wants to maximize their 60-90 minute training sessions so that they can compete at local events. The program is generally laid out with one to two strength progressions, conditioning and then accessory work – so there could be parts A, B, C and D where Fitness and Performance typically only have parts A and B. Athletes need to plan for a comprehensive warm-up so as to prep their body for the demands of the program. We recommend that you have 90 minutes available for training in order to follow this program.

Invictus Masters – The Invictus Masters program is built for you! If you want to continue to improve your fitness level, get stronger and more mobile, then this is for you. This program offers a well thought out training program designed specifically for masters athletes who are looking to compete at a higher level in the sport of CrossFit, or those who want to generally improve their athleticism and ability to keep up with the young kids in their CrossFit gym. The program places year round emphasis on mobility and stability exercises, and movements that we have seen directly benefit master athletes.