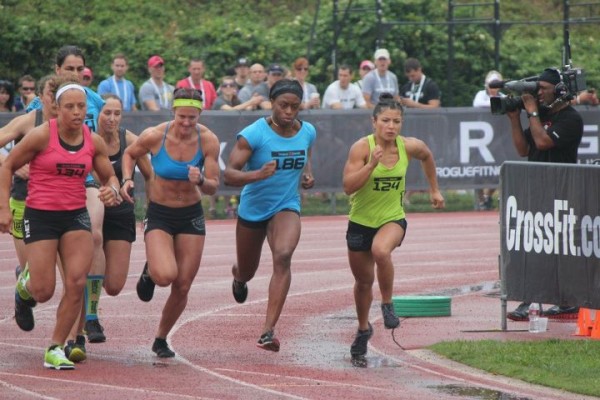 If you attended the 2012 CrossFit Games you probably witnessed (or maybe even experienced) how big of a factor heat had in some of the events. We saw CrossFit Games legend Chris Spealler cramping during the triathlon, and our very own Justin Nahama ushered into medical for IV fluids after a stadium workout. There were many more athletes who also suffered from severe dehydration throughout the weekend.

Proper hydration is essential to peak performance. Hydration is especially important when it comes to longer endurance events – like the super triathlon at the CrossFit Games.

Many might have suspected a longer endurance event to kick off the Games (that has happened a few times in the past), but who would have guessed the first workout of the games was going to be a triathlon? And not just a typical triathlon, but a grueling event through sand and hills under the hot sun for 2-3 hours. So how do you prepare your nutrition and hydration for something like this? I coach Crossfit Endurance courses and one of the lectures is geared towards fueling for an endurance event. At what point does someone need to start to fuel? Anything longer than 30-45 minutes and most athletes are going to need a strategy in place to maintain effort/intensity levels. Here are some general guidelines that we teach:

Proper performance fueling is a three-legged stool, it requires hydration, electrolytes and nutrition.

Hydration – The general rule is to drink at least half of your body weight in ounces. I weigh 170 lbs, which means I need to drink at least 85 ounces of water daily (this is assuming no activity). Other factors that will make a difference here are how much I sweat during exercise, temperatures, humidity, altitude, etc…. During an endurance event I want to make sure I am drinking at least 16-20oz of water per hour, but that would change based on how much you sweat – every one sweats at a slightly different rate.

Nutrition – You’ve probably heard the phrase, “calories in, calories out.” The problem with this for endurance-based events is that you are burning calories quicker than you can replenish them, causing you to dig into your stored glycogen. An athlete will typically burn anywhere from 600-1500 calories per hour of intense exercise, and we can typically only consume 200-300 calories per hour. So how do we fuel during an endurance event? The most common thing you see is Gu packets. I know these are not paleo, but you may need to rely on these if you want to PR in your 1/2 marathon or you are doing your first triathlon. Each of these will typically provide you with 100 calories, which means you ought to plan to take about 2-3 per hour, these are pretty easy to carry. Another more “paleo” option to consider are Honey Stingers. Other options are recovery drinks such as Genr8 which is what I have been using as my preference for the past 2-3 years. You can mix these and carry them during a race, although I don’t think its ideal since it might be weighting you down.

Electrolytes – Most people think that Gatorade will provide them with everything they need. Sadly, that’s not true. Although these may contain sodium and potassium, you want to find a product that will also provide you with calcium, magnesium and chloride – my suggestion would be Salt Stick Tablets – I will typically take at least one per hour of exercise, and if the conditions are warmer I will double up on it. Make sure you are drinking enough water too so you don’t overload your system with electrolytes. The opposite can also happen – flooding your system with too much water and no electrolytes which typically will lead to severe cramping, nausea, vomiting and all sorts of unpleasantness and quite serious possible side effects that could lead to death. (Look up Hypernatremia or Hyponatremia for some additional information.)

These, of course, are general guidelines; a lot more can be said about each of these topics. For more information look up “Paleo for Athletes” since it breaks down endurance events based on time domains – 0-90 minutes, 90 minutes-4 hours, 4 hours-12 hours and 12+ hours.

Last but not least, have a read through the following articles as well:
Proper Hydration for Summer Training
Cracking the Code on Sweat Rates

[…] Informations on that Topic: crossfitinvictus.com/blog/hydrating-for-performance/ […]

Awesome, thanks man. Where do you usually buy yours at? I’m looking at amazon and it seems a bit expensive

Nuno, which Genr8 would you recommend?

I used the endurance based formula and I personally like the Fruit Punch flavor. I believe you can find individual serving packets at GNC

I’d like to do that sweat rate test…I think I can beat that 5 L per hour record based on the condition of my shirt after a few of these recent Invictus workouts. If not, I feel horrible for that guy because I cannot imagine sweating any more than I do each morning.

Awesome information, Nuno. I will remember all of this when I do my Ragner race in November.