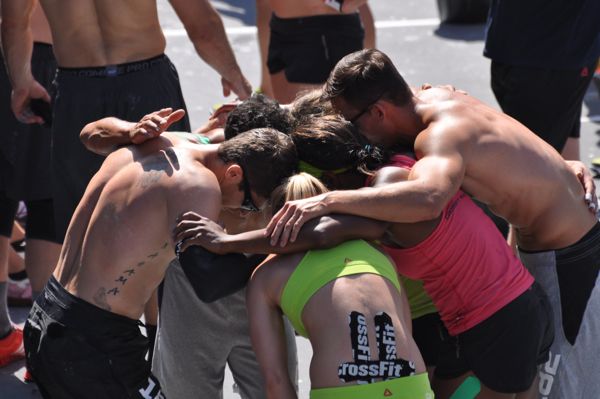 I drink water all day long, I consider myself to be in shape and pretty dang tough, I eat well, and I am not on any medications, so I never thought I’d fall victim to heat exhaustion. I’m talking at least two gallons a day of water. That mug I carry around isn’t full of coffee; it is water that I refill about every hour I am at work. I have always been skeptical of the overuse of sports drinks but NOW I know that, sometimes, water just isn’t enough.

As you know, it’s been HOT for a couple weeks now, and inside the gym it has been about 10 degrees hotter than the outside temperature. I have been spending 8 hours a day in this environment and an hour to an hour-and-a-half a day working out in it. Like I said, I thought I was doing enough to hydrate by drinking so much water. But I rarely drink anything other than water, especially not coconut water (which I personally find disgusting) or Gatorade (for which I have a fundamental disdain). Adding either one of these beverages and their plethora of electrolytes once a day could have kept me from going over the edge, and now I realize how important they are under these circumstances.

First of all, what is heat exhaustion and what are the symptoms?

Heat exhaustion occurs when a person exercises and works in a hot environment and the body cannot cool itself adequately. Dehydration occurs with water loss from excessive sweating, which causes muscle cramps, weakness, and nausea and vomiting. This makes it difficult to drink enough fluid to replenish the body’s water supply, and the lack of body water impairs further sweating, evaporation and cooling. Relative humidity is an important factor in developing heat exhaustion. If the humidity is too high, sweat on the skin cannot evaporate into the surrounding air and body temperature cooling fails. – MedicineNet

Sound familiar? Although many parts of the country wouldn’t consider our recent “heat wave” and “humidity” to be all that high, living here in San Diego, our bodies aren’t regulated for this weather.

All week, I should have noticed the signs building up. They were there – salt cravings, extreme fatigue (me going to bed even EARLIER than usual and needing naps in the afternoon), loss of appetite, extreme thirst during and after workouts, mild headache, and then finally vomiting and dizziness. Looking back on the week that I experienced heat exhaustion, I remember a couple specific incidents that should have been red flags: 1) me telling someone that I had already had 6 of my mugs of water (by 9:30 am) but hadn’t peed; and 2) being so thirsty as to drink 60 oz. of water during an hour-long pool workout when nobody else was thirsty (I even offered them some of my water and nobody took it).

So how do electrolytes come into play and why are fluids with them better than good ‘ol water alone?

Electrolytes play an important role in the natural homeostasis of the body by maintaining a stable internal environment. They help coordinate muscle contractions, heart function and the conductivity of electric signals in the nervous system. Normally the kidney is the organ that regulates fluid absorption and excretion in order to preserve a narrow electrolyte balance, but when the level of electrolytes becomes too high or too low, an imbalance can occur. Sodium, potassium and calcium are usually the elements most likely to suffer from an electrolyte imbalance.

An electrolyte imbalance is caused by a change in the amount of electrolytes in your body. There are many reasons why these levels might change, including a poor diet, medicines, and kidney problems. Athletes, or at least anyone who exercises on a regular basis, must be acutely aware of an electrolyte imbalance because of the minerals that may escape from sweat, especially during hot days. Sweating is important for maintaining body temperature, but a few grams of electrolytes are lost for every liter of sweat.

So, what can you do to prevent heat exhaustion?

The easiest solution is to hydrate properly during and after exercise. Water does not contain electrolytes, so you will need to replenish the minerals that were lost from sweating. Sports drinks, natural (Coconut Water, which we sell at the front desk) and artificial (like Gatorade), are popular because they provide a more concentrated and targeted amount of electrolytes than most other foods or liquids. They also provide excess sugar, so don’t use this article as an excuse to binge on them. Unless you are working or exercising in the heat for long periods of time, one a day in this weather should be enough for most.

I was thinking about this and had to look it up. They are just saying drink water but if it’s so hot, temps excess 110F the body cannot absorb water fast enough. I think it’s just not a water issue. They need to spread that a proper intra-additive to add w/ the sports drinks/cooler is necessary than just water alone.

Competitive/performance oriented people do these things but this has to be done for everyone else too.

Adding on the previous discussion about electrolyte tablets, I personally take ReplaceSR. It’s a 4-6 hour sustained release tablet so I just pop one before working out and just worry about staying hydrated. I think they’re giving out free samples on their site if anyone wants to check it out.

You should try looking into these natural solutions http://www.e21.com.au/electrolyte-replacement/

Saltstick too like from rouge, cfendurance, ect. My dad is in Mich.(snow bird) and he said on skype my uncle(another old geezer) was having trouble with leg cramps at night for some time. I had just read an article posted by R. Wolf that was written by L Cordain. It had said to drink lots of water(which Im sure my uncle was only drinking coffee) and also get your electrolytes. He went to the local pharmacy and got some salt tabs/elec. replacement and then drank extra water. My dad reported back a couple days later saying my uncles cramps were… Read more »

Another option would be electrolyte tablets. I like Nuun, but there are many options out there. Some you can take straight, some you drop into a full water bottle (or mug) and they dissolve in a few minutes. They offer the salts your body craves, without the sugars in Gatorade/Brawndo.

Absolutely! Nuun tablets and SaltStick capsules have been the preferred electrolytes for our competitive athletes . . . and it is BRUTALLY hot every year at the SoCal Regionals (on pavement east of L.A.) and on the floor of the Home Depot Center. Both of these products are great options that don’t come with all of the crap sweeteners that the more readily available sports drinks contain.