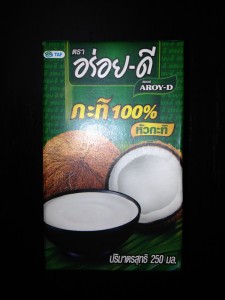 I am stoked to tell you guys about a product I recently discovered in the coconut world – 100% coconut milk! No preservatives or any other additives for that matter, not even guar gum! What’s the big deal, you ask? Already using coconut milk? Well, check your label. I’m willing to bet there’s more than just coconut milk in there. There are two common additives (below) and some others that are also sometimes used.

Bisphenol A (BPA) is used in the lining of certain canned foods. BPA especially leaches into canned foods that are acidic, salty or fatty, such as coconut milk, tomatoes, soup, and vegetables. More and more studies are linking BPA consumption to reproductive abnormalities and a heightened risk of breast and prostate cancers, diabetes and heart disease, so they are most definitely something to avoid whenever possible.

Guar gum is the endosperm of guar beans. Beans and legumes have a variety of compounds in them that make them difficult to digest, especially for people with digestive problems (1 in 3 Americans, from the latest statistics, me being one of them). I have noticed that my gut issues improve when I use the guar gum-less version; maybe yours can too.

My new find in coconut milk doesn’t have the BPAs because it comes in a handy-size cardboard box instead of a can. So, besides the health benefit of removing BPAs from my diet, I’ve found that the 8 oz. box is a much better portion size for me than the regular 16 oz can. And, since the package is made of cardboard, it is much more bio-friendly! Win-win! It also doesn’t have guar gum – it really is “just coconut milk”.

I am also super stoked that this is the BEST tasting coconut milk I have ever had. It is super creamy and has a very light and clean flavor and even a good amount of depth for coconut milk. You can actually taste the sweetness, then the creaminess, then the nice, mellow finish. I have used it to cook, put in my tea (it doesn’t coagulate like the other stuff), put in smoothies and even drink over ice with a sprinkle of cinnamon. Delish!

The product name is AROY-D and you can find it on Amazon.com. But if you live in Southern California, hop on over to your local 99 Ranch Market, where they are regularly on sale for 99 cents per package.

Three Reasons Why Coconut Milk May Not Be Your Friend by Chris Kresser, Medicine for the 21st Century.

I love the non-alcohol pina coladas my wife makes but rarely drank them because of the additives to the coconut milk. Thanks for the tip.
Found the above by Chris Kresser and he gives arroy-d as an option near the end of the article:

Nice! I’ll have to try this one. We’ve been buying the Native Forest brand on Amazon and really like the texture and flavor. No bpa, organic, but it does contain guar gum: http://www.amazon.com/Native-Forest-Organic-Classic-13-5-Ounce/dp/B001HTJ2BQ/ref=sr_1_1?ie=UTF8&qid=1389311083&sr=8-1&keywords=organic+coconut+milk