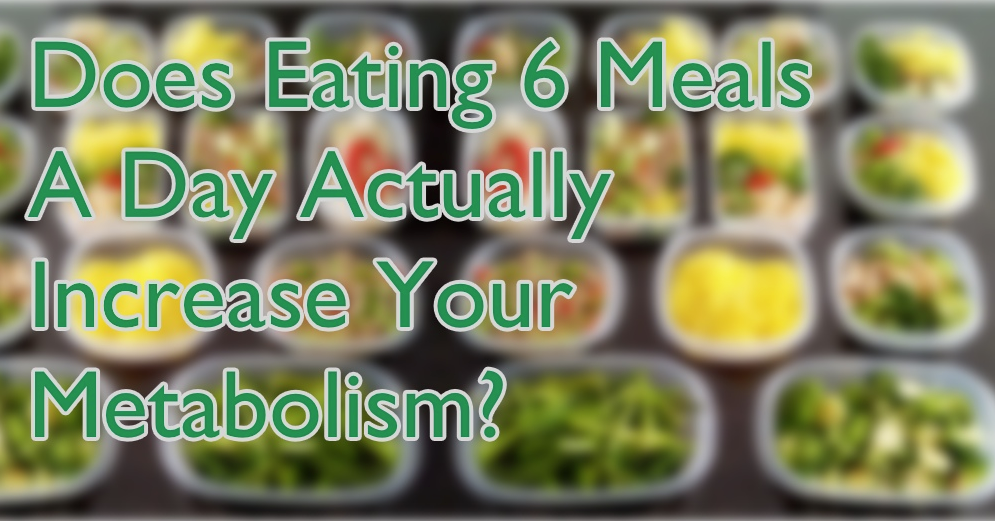 A common bit of advice you hear in the health and fitness industry is to “eat 5 or 6 small meals throughout the day to boost your metabolism and increase fat loss”. If your desired goal is to lose fat and improve your body composition, you will probably want to do some meal prep each week to make sure you have healthy meals to eat while at work or while you are on the go. But is it really necessary to eat six times a day? For many people, eating six meals a day just isn’t practical. Meetings, appointments, commuting, phone calls, kids, making it to the gym, and life in general takes priority for most.

While impractical to implement for some people, there is some evidence that this approach can work. In the bodybuilding community, many still recommend eating every 2 or 3 hours. Keep in mind, there are usually other factors that include portion control, eating out less, better meal preparation, and improved appetite control. But the question remains – does increasing meal frequency actually change your energy expenditure? Let’s assume you eat the same amounts of the same types of food in a day. Does splitting up that food into six meals, three meals, or even one really large meal make a difference?

What The Research Suggests

There’s been a great deal of research conducted in the past few decades on this topic. Early research on animals compared groups of lab mice that either ate the same amount of food in two meals or ten meals split throughout the day. They concluded that “the two groups did not differ in food intake, body weight, body composition, food efficiency, or energy expenditure at any time during the study” [1].

Human studies have also found similar results. In 2010, a study published in the British Journal of Nutrition compared a “low-frequency” meal pattern of three meals a day to a “high-frequency” pattern of six meals a day in overweight adults. The two groups consumed the same amount of food with the only difference being meal frequency. While both groups lost weight, they found there were no statistically significant differences between the two groups [3]. In other words, the high-frequency group did NOT experience greater weight loss.

Based on research, as well as anecdotal evidence, improving your body composition has more to do with eating a healthy diet, maintaining proper energy balance [2], and much less to do with increased meal frequency. While meal frequency doesn’t seem to significantly increase energy expenditure, it appears to play a role in other physiological factors.

One study compared eating three meals a day to eating the same amount of food in just one large meal a day. Researchers found that eating one meal a day resulted in elevated fasting glucose levels, impaired glucose tolerance, and delayed insulin response compared to eating the same amount of food split into three meals a day [4]. The effects were reversible when subjects returned to eating three meals a day but it does suggest that eating too infrequently could temporarily affect your ability to tolerate carbohydrates. Overall insulin levels did not appear to be affected by meal frequency. Other research has also found similar results [6].

Another study in the American Journal of Clinical Nutrition found that test subjects maintained their weight within 2kg of their initial weight whether eating three meals a day or one meal a day. However, they found that test subjects experienced improved body composition and decreased cortisol levels while consuming one meal a day. However, they also experienced increases in blood pressure as well as total, HDL, and LDL cholesterol levels [5] compared to eating three meals a day. While these metrics did increase, the values were still within relatively normal ranges. This suggests that Intermittent Fasting might be an effective strategy for improving body composition in some people.

It Depends On Your Goals

Increased meal frequency doesn’t appear to play a huge role in terms of total energy expenditure. If you are just starting out with a goal to improve body composition, focus on building good nutrition habits and consistently eating healthy, balanced meals first. You can play with details like increasing or decreasing meal frequency once you have established good habits and learned the basics of healthy nutrition.

If you are just trying to lose those last few pounds, you will likely have to experiment and see what works for you. While it doesn’t appear to increase energy expenditure, eating six meals a day can be an effective approach. Some people do better with frequent meals, while others don’t have the stomach for it. Also, if you are trying to gain weight, eating more meals a day can allow you increase your caloric intake. Assuming you are eating fairly “clean” food sources, it’s pretty hard to consume 4,000 or 5,000 calories in a single meal or even three. You’ll have to split up your calories into more meals just to hit your requirements every day. Unfortunately, there’s no “one size fits all” approach to nutrition. I encourage you to experiment and see what works best for you.

Still feeling lost? Feel free to consult one of the coaches here at Invictus.

Tips For Successful Goal Setting And Achievement by Nichole DeHart

Exactly the article I was looking for…great work