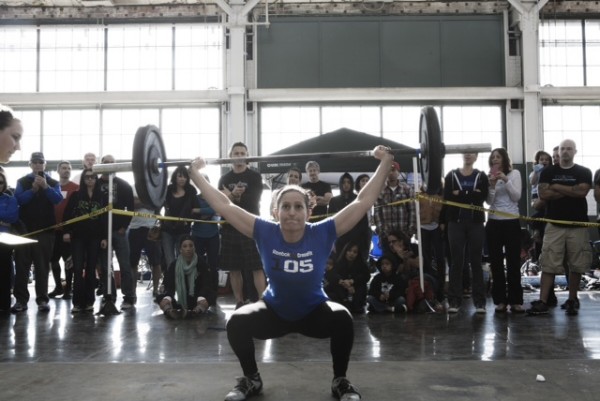 There are indeed superheroes all around us. And the crazy thing is, sometimes it’s the superheroes themselves that cannot recognize the supernatural powers they exhibit. Allison Belger is one of those superheroes.

Allison co-owns and operates four successful gyms in the San Francisco Bay Area with her husband T.J. Belger. She is also a mother (and soccer coach, nurse, tutor, etc…) of two beautiful little girls. As if that were not enough to keep her busy, Allison – who is also a licensed psychologist – just wrote a book that will be released on March 20th. The book is titled, “The Power of Community: CrossFit and the Force of Human Connection.” – you can pre-order it here, and I strongly suggest doing so!

I could stop here and it wouldn’t take much to convince you that Allison truly is a superhero for juggling those roles. But here’s the kicker . . . she’s also a bad ass athlete!

Like many athletes, Allison is her biggest critic. She doesn’t always take the time to appreciate her achievements, often opting instead to focus on a perceived weakness with the goal of becoming even better. While that approach makes for highly successful performances, it can also be a tough road.

Allison contacted me in September seeking coaching to help keep her on track as an athlete. I was honored, and also a bit scared. She had access to several great coaches at TJ’s Gym, but she wanted an outside perspective to help her grow as an athlete. Her goal was simple . . . she wanted to perform well at The NorCal 40’s – a competition for CrossFit athletes in their 40s, which was held yesterday in the Bay Area.

For the last several months I have tortured Allison with workouts and movements that were well outside her comfort zone. She never balked. And yesterday she achieved her goal . . . and then some. Not only did Allison perform well at the NorCal 40s (her goal), she finished in first place!

The road to victory was not easy. She snuck in training around coaching her daughters’ soccer teams; she worked on very little sleep as the book deadline neared, and then as it was heading to print; she battled flu season with her family; and on a few occasions must have wondered if it was really possible to juggle all of this. In the end, she did.

Please join me in congratulating Allison not only on her first place finish at the NorCal 40’s, but also on serving as an inspiration to all of us who find ourselves juggling multiple roles and wondering how we will squeeze in time to for our own health and fitness.

Please also head over to Amazon now and pre-order Allison’s book, “The Power of Community: CrossFit and the Force of Human Connection.” With her track record of success, you KNOW this book is going to be great!

Wow! CJ, this is just over-the-top kind of you! Coming from someone who does as much as you do for so many people, it is especially meaningful. Thanks to the rest of you, some of whom I’ve not yet met, for your kind comments. The great thing about this whole endeavor we’re in is that we can each relate to the triumphs and struggles we all share. This is what my book is all about. Thanks again, Invictus, for your support and encouragement! Come visit us at TJ’s Gym any time you’re up in the Bay Area, and consider it… Read more »

Wow! Congratulations on your dedication and success Allison! I can’t wait to read the book!

I think you should add that to your business card…

Congrats Allison on your first place finish!! I’m so happy for you! Still looking forward to your book. Take care.

Wow…what an inspiration! Having just turned 42 that gives me something to look forward too. Before CF turning 40 was like a downhill spiral for me, and now I’m almost in better shape than I was in my 20s. Thanks CF and Allison for motivating me to continue to strive to be the best me I can be! And bad ass, strong chicks ROCK!!!! Go Allison!!!!

Congratulations Allison! What an accomplishment!

CONGRATS Allison!!!!
choosing the hard road is never easy, but it always makes for a greater reward at the top of the hill. Well done.