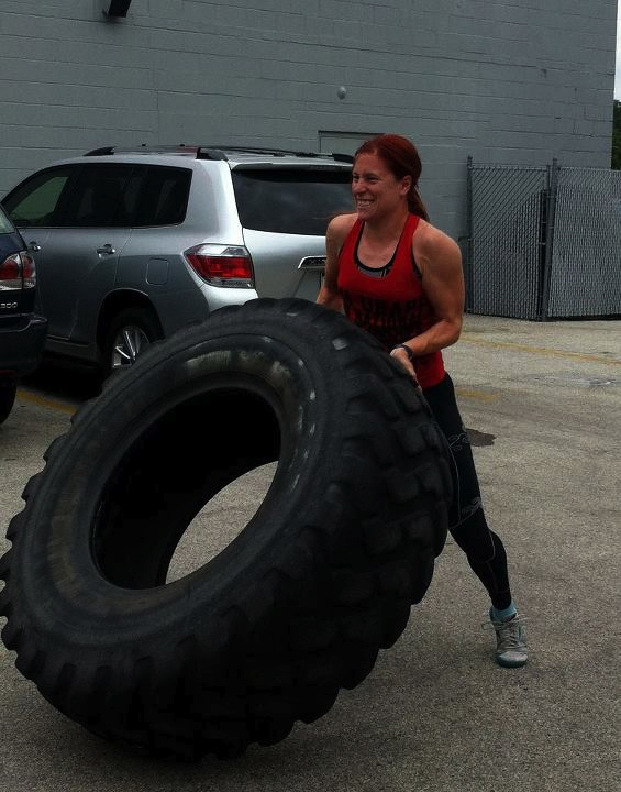 I’ve gone through life with several female fitness heroes; as a kid in the 80s, it was She-Ra, Princess of Power (strongest woman in the Universe, twin sister of He-Man). At present, I am thoroughly inspired by the amazing Amazonian women who compete in the CrossFit Games. But one figure that I’ve always been physically motivated by for many years has been Linda Hamilton in Terminator 2 – particularly in the quest to attain strict pull-ups. The scene where she rearranged the bed in her prison cell into a pull-up bar and knocks them out while planning her escape and how to save the world from apocalyptic destruction has always resonated with me.

I’ve spent several years working towards developing more upper body strength. I started yoga in high school as a gangly, awkward, non-sporty teenager and greatly benefited from tons of sun salutations. During college, I took up jiu-jitsu and went in and out of gyms doing curls, presses and lat pull-downs. But one element that consistently eluded me was the strict pull-up: something so elegantly simple, beautifully natural and fulfilling that I had always aspired to attain and “be like Linda.” When I moved to California two years ago (the “land of the fittest” in my East coast perception), I felt even further drive to improve my fitness and one day conquer pull-ups. About a year ago (before joining Invictus), I did the P90x program and bought a doorframe pull-up bar. I gradually progressed through the chair pull-up variations, and eventually to standing on the floor, but still no dead-hangs. I joined Invictus in December 2011 and I was hooked. Coach Nichole was very encouraging during my Fundamentals – she said I was very close and I was further motivated. Two months into training, I got my first strict dead-hang pull-up (had worked the negatives, banded, and partner-assisted versions to get there). But I wanted to get more. After attending one of Coach George’s pull-up clinics, I got his programming entitled “Three Weeks to More Pull-Ups.” This was perfect for me to work on at home with my doorframe pull-up bar, even time-efficiently using the rest periods to fold my laundry! By March 2012, I was at 3 pull-ups. By June, I had gotten to 6 through following the program. So getting double digits seemed like a good goal to set for myself to hit by the end of the summer. Just last week, I achieved that goal.

I work as a grad student in a UCSD biochemistry lab where most all of what I work hard at yields little success or progress (such is the nature of science and grad school). So with joining Invictus, it’s been very fulfilling to set performance goals and actually see myself progressing with something in my life, particularly when feeling like I’m troubleshooting around in circles in my thesis research.

Attaining pull-ups has done wonders for my self confidence, particularly in one of my favorite summer activities, mountaineering on 14ers in the Sierras. This summer I was lucky enough to get a permit in the lottery for the Mountaineer’s Route of Mt Whitney. While not requiring “technical” rock climbing skills or equipment, the last 200 ft to the summit has several Class 3/Class 4 ledges and scrambles with a good deal of exposure. Having gained more upper body strength and confidence in my ability to pull-up my body weight propelled me to the summit on gnarly terrain that would have surely made me turn around in the past.

In terms of performance goals, I really like making them over a 3-month seasonal time period. I also like setting a goal for something I can work on at home as well as in the gym, thus enhancing my focus towards meeting that goal. The great thing about pull-ups is that there are so many varieties of them, and the assisted versions all help towards building more strength, one step at a time. And I will continue to keep building more. I don’t have the kipping pull-up quite yet (it’s not really a natural, intuitive movement for me personally), but I’m working my way there. I am currently figuring out my next 3-month Fall goals. I will certainly set some more strength goals, and since I invested in a Rx Jump Rope, I plan to work towards double-unders at home (something I used to run away from as a kid).

I’m so grateful for having found Invictus in the past year. This is an amazing community of people to be a part of and connect with, and they inspire me and keep me going when I get frustrated in other parts of my life. And I’m certain that if She-Ra and Sarah Conner existed in our reality, they would be doing CrossFit along with us.

Where can I find more info on the program, “Three Weeks To More Pull Ups” you’re describing? I’d like to try that for myself. Please post a link if possible. Thanks.

Irene! What a great blog! I am a fairly new Invicti and have very similar objectives with pull ups and double unders, especially! There are T2B and muscle up..one day. Pull ups were a subject of converstion with Nichole, a session with Dave on a “home wkout” and now I must ask you to share George’s 3 weeks to pull ups. Elusive they are.. but not unattainable. Thank you for sharing yoru journey and reminding us that we can attain what we envision ( and work towards ; ) ).

Great job! I know your feeling! For me, as a rock climber, pullups and dips alongside all gymnastic movements have been not to say easy but more naturally attained. My dream now as I’ve started doing crossfit is to be able to master the olympic lifts as it is something that doesn’t come naturally to me, being small & skinny. I have a sort of a fearsome respect for them but at the sime time I know they will come with practice just as my pullups, dips and muscle ups have. 🙂 Good luck in tve future! Go for 15… Read more »

Awesome job, Irene! Wish I could’ve been there to see you set your PR. The video looks great. Congrats!

It was great to be witness to your PR last week! Pull-ups are my favorite exercise, so I know how tough it can be to bang out a whopping 10 straight! Thanks for the continued inspiration.

A lofty Feat of Strength attained along with 80s and 90s pop culture references. Well done. Im sure Sarah, her son Jon, and Jon’s best friend (whose name I forgot but happened to also be his father because he went back in time to save everyone from Arnold in the original Terminator) all approve!