We’re going to continue on that accessory work train, and seeing as it’s beach season year round down here in San Diego, I would be crazy not to talk about some of my “core” ab exercises (see what I did there?)

What are the abdominal muscles and what are their purpose?

“Abdominal muscle, any of the muscles of the anterolateral walls of the abdominal cavity, composed of three flat muscular sheets, from without inward: external oblique, internal oblique, and transverse abdominis, supplemented in front on each side of the midline by rectus abdominis.” 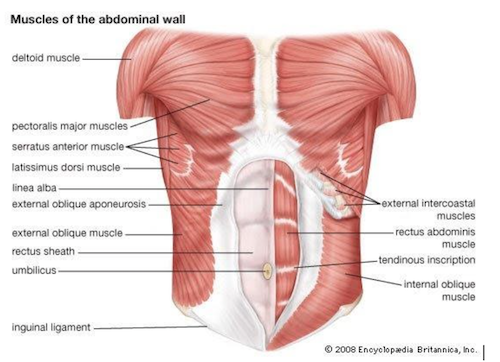 “The muscles of the abdominal walls perform a variety of functions: (1) They provide a tonic, elastic muscular support for the viscera and, by their recoil, pull down the rib cage in expiration. (2) They contract against blows to form a rigid protective wall for the viscera. (3) When the glottis is closed and the thorax and pelvis are fixed, these muscles take part in the expulsive efforts of urination, defecation, childbirth, vomiting, and of singing and coughing. (4) When the pelvis is fixed, they initiate the movement of bending the trunk forward. Thereafter, gravity comes into play, the abdominal muscles relax, and the muscles of the back then take on the strain. (5) Conversely, the abdominal muscles come into play in preventing hyperextension. (6) When the thorax is fixed, the abdominal muscles can pull up the pelvis and lower limbs. (7) The muscles of one side can bend the vertebral column sideways and assist in its rotation.”

So in other words…. they do basically EVERYTHING. That’s why in CrossFit methodology we harp on core to extremity so hard, and also why we’ve begun incorporating drills more often that involve bracing the midline and teaching people how to properly use it better (shoutout to Coach Kir for her bracing seminars).

Without going to deep down the rabbit hole of the abdomen’s purpose behind bracing for lifts – this is an accessory work and how to make it stronger post after all – just know this…a strong midline = a strong body, and the ability to properly brace your midline when going through different planes of motion under a variety of loading techniques is key to getting stronger.

If you’d like to learn more about properly bracing your midline, feel free to ask and I’ll get you pointed in the right direction.

Now that we’ve got that stuff out of the way, let’s talk about some specifics and how to make them stronger!

These are the ones that most people are concerned with…think of them as the 6-pack. That said…these are ALSO the ones that more often than you’d think people have all show and no go. Despite what you may think, it is 100% possible to have abs that look good but don’t function worth a damn…and we don’t want that! So here’s some of my favorite drills to strengthen them!

Before I start…When considering truly strengthening the rectus abdominis, most CrossFit athletes would instantly divert to Toes to Bar and GHD Sit-Ups. However, I’m not sold on their ability to truly strengthen this muscle group, solely because of one other area that tends to take over. The hip flexors. Both of these movements are very hip flexor intensive, and many times after completing a set I’ll notice that my abs feel fine but that it feels weird to straighten my legs out…this tells me that these two movements are not the absolute bee’s knees for training your abs. That said…some would argue that the hip flexors run congruent with the abdomen with regards to overall core strength, and that weak hip flexors will lead to a weak abdomen because those may give out first…and that may be true…but what I’m talking about and concerned with in this particular post is purely strengthening the abdominal muscles.

Top 3 Exercises for the Rectus Abdominis

Throw those into your regimen and you’re bound to get a STRONGER midline.

Now, I know we don’t just want a strong midline, we want it to look good too, and it’s boring doing static holds all the time, so here’s some of my go-to other ab exercises!

You’re probably asking…why aren’t there any rotational movements in here? Don’t the abs do that? Well yes, yes they do…and we’re getting to it! The above list just happens to be movements that primarily target the rectus abdominis portion whereas the rotational component of the abdomen takes us to our next section…

“In my opinion the side bend is the most important exercise for the abs. The obliques not only work as stabilizers but are responsible for hip extension when lifting off the floor or out of the bottom of the squat. You must learn to push the abs out, expanding them against your power belt. Side bends with a dumbbell at a time; bend to the side and return to a standing position.” – Louie Simmons

I fully agree with him. The obliques are of utmost importance when it comes to preparing and bracing for moving significant weight. An inability to do so greatly increases your risk for injury. Like I said before, I’m not going to go into detail about how to brace because this post is all about making them stronger. But I’m going to double down on my previous statement by saying that stronger midline muscles – particularly the obliques – leads to an easier ability to control them properly!

Here’s some other awesome movements:

These are the two biggies when it comes to training the anterior portion of your midline. The abdomen is made up of so much more and goes so much further in depth (literally we could get into the gut and everything that is protected by the abdomen and how it runs the body, but we’ll save that for another post: The Core: Abs, Spine & Everything Fine), but when it comes to the fitness world and training, these are going to be the two that predominantly run the space.

At the end of the day, I like to add some ab/core training in nearly every day that I workout…it doesn’t need to be anything crazy, just a couple sets of a 1-2 minute plank hold and some banded Pallof holds will suffice.

One thing I see is that people like to go a little overboard when training their abs. They dedicate like 30 minutes to it…well folks, the abs are a muscle, and they get sore and fatigued just like any other muscle. If you go too crazy on them you’ll get that ab-do feeling where it feels like you’ve been repeatedly punched in the gut over and over and over and over…and over and over and over again (Marshawn Lynch you’re my boy!!! Go Hawks!)

The abs don’t need their extra special attention. If anything, go a little less HAM on them because you’re already using your midline – hopefully – in the rest of your training anyways! 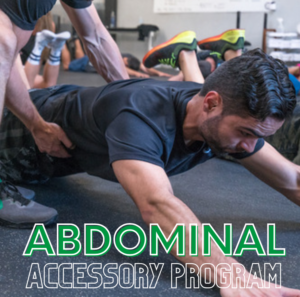 Holden-Can you provide more detail on what the Hip/Ab Machine is? Great article!