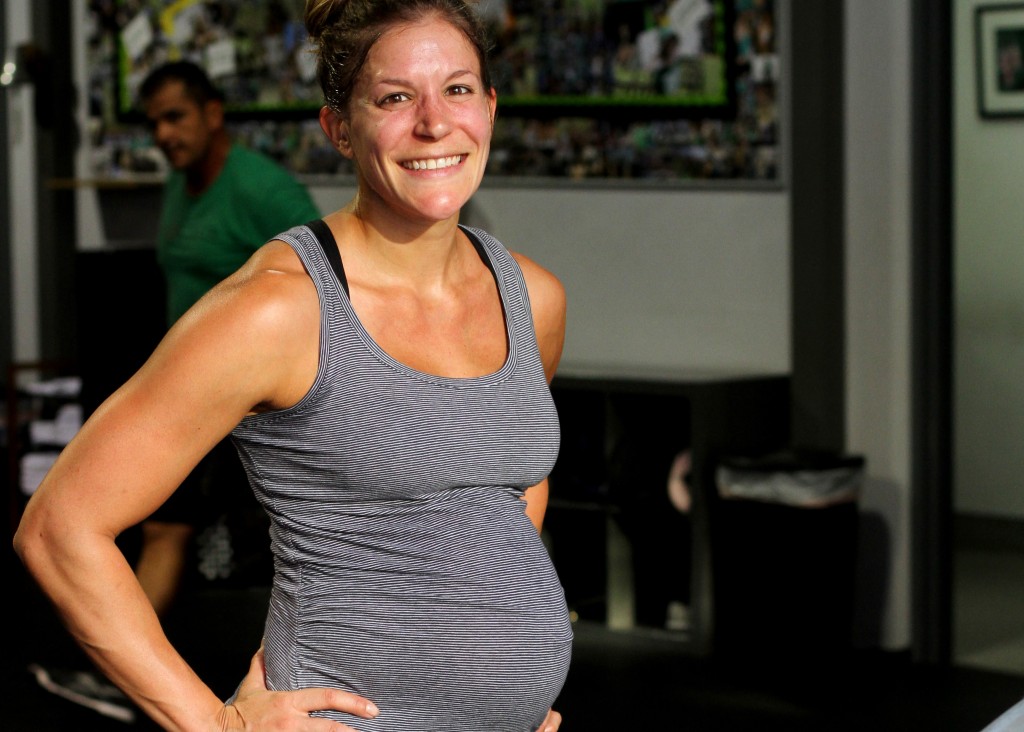 A Commentary on CrossFit during Pregnancy
Written by Melissa Hurley

Are you pregnant or thinking about becoming pregnant? Are you wondering about continuing CrossFit during your journey? Who better to learn from than those who have been there? I asked a handful of our members to share their current and past pregnancy experiences. I hope some (or all) of their stories resonate with you.

Half of the ladies I spoke with have been pregnant more than once and the other half are brand new moms or currently pregnant. All of the women were active in some fashion before they became pregnant; some with CrossFit and others with running. A couple of them picked up CrossFit after their first pregnancy to help lose the baby weight.

All of the participants had spoken with their doctors or midwives regarding their desire to stay active during their pregnancies. One member said her doctor’s “fitness recommendations were (understandably) very small, conservative  and they rarely adapted to people who CrossFit or love pushing themselves in a sport they love.” The most common doctor recommendation was to, “do whatever felt comfortable – but not over exert or try to make any gains or PRs, because after all, the baby should be the body’s number one priority.”

One member, Vicki, shared that her doctor suggested she “stop squatting below parallel. The relaxin hormone released during pregnancy was mentioned and how I had to be a little more careful with such movements. I was also told to avoid movements where I lay flat on my back like sit-ups/crunches.”

When I asked our mommy members if their fitness schedule changed during pregnancy, the newer moms mentioned the first trimester being the most adaptive, in the sense that they were more tired, dealing with nausea, and learning a new body. Kathy said, “I did do less CrossFit, but mostly because my first trimester was so full of naps!”

Those who were veterans had honed in on listening to their bodies. Rachel shared that she learned to “naturally taper as the weeks go on, simply by just listening to my body and not doing anything that feels too uncomfortable.” A couple of the women added yoga, swimming, and going on long walks to help with some imbalances and mood. All made modifications to movements (ask your coach or another pregnant classmate), stayed away from crunching movements, and learned to slow down and embrace the journey.

It was surprising to me how the mothers found a rhythm in their activity. If I had to guess, it could be attributed to their prior activity habits. However, Jen shared that during her first pregnancy, she went from “competing in fitness competitions to living on Dairy Queen french fries, tartar sauce, egg mcmuffins and watching a lot of television. At the time conventional wisdom was that pregnant women were to be relatively sedentary. No prolonged activity or strenuous work was encouraged.” Jen’s mentality and activity changed during her second pregnancy (almost 10 years later) where she, like the other moms continued through the majority of their terms with the main changes taking place in the final trimesters.

In the final trimester, they began to be a little more uncomfortable with the extra round ball growing inside of them and their center of mass throwing off their balance. Their energy levels depleting a lot faster during this time, they said. Rachel stated that, “as time has gone on and as my bump has got bigger, mobility and flexibility has played a big factor too.”

The best and most important takeaway from my time with these awesome ladies was their advice to other pregnant, active ladies:

Rachel: Listen to your body and try to enjoy just being active. Recently I’ve really tried to just focus on enjoying being in the group classes, doing what I can, trying to get a good workout in and enjoy the social aspect of CrossFit. I’ve loved taking the opportunity to stop coming into the gym constantly thinking about hitting that next PR, pushing myself to get better at pull-ups or wondering if I’ll ever be able to do a muscle up and instead focusing on getting to know others.

Lindsey: Just listen to your body, relax and chill out.  I am pretty intense in my workouts, but it has been nice to take it easy and just get the exercise in and enjoy the people around me at the gym.

Jen: Helpful tips: Even in the first trimester keep coming to class! I know it’s hard when you feel like you’re going to puke due to morning sickness but you will feel better after you’re done. I can’t tell you how many times I would go and throw up and then get right back out there. In the first trimester I also felt a bit dizzy in workouts, which is completely normal but it helps to give the heads up to others. For example, I would be doing wall balls and when I would move to the next thing I had to wait a few seconds to collect myself.

Vicki: I’d definitely say that if you are able to keep staying active and doing CrossFit during your pregnancy, do it. I loved being pregnant. I really believe I delayed a lot of pregnancy discomfort because I was still able to crossfit (like back pain — I didn’t really get bad back pain until the last few weeks of pregnancy — and it was still tolerable). I also slept okay during pregnancy. I heard from others who hadn’t been able to really stay active that they had issues sleeping during the night. Pick your coaches brains’ on modifications. Talk to moms who did CrossFit during pregnancy before you. I was definitely inspired knowing that there were others who’d been able to work out during their pregnancy and even a few days leading up to their delivery. Finally, I’d also say listen to your body; if it doesn’t feel comfortable, adjust and modify. Definitely keep moving if you can, though. I swear by it. It was the one thing I felt I could control during that crazy time where my body was changing.

Anonymous: “Just keep moving!” That is what my coach, Melissa, told me and it has already rung true in my first weeks of prego CrossFit. One great piece of advice that someone told me is that they felt best during their pregnancy on the days they went to CrossFit. I actually felt really great today (and I was REALLY, REALLY tired last week), despite flying to DC and back this week, and, yes, I went to CrossFit!

Kathy: Don’t pressure yourself. Do what feels right. Know that you don’t have to eat as many burritos and milkshakes as I did. I almost fell off the exam table when the midwife told me I only needed an extra 200 calories a day or the equivalent of an extra granola bar. I’d been eating entire extra meals! And those extra meals were hard to work off post-pregnancy when I was ready to get back in shape.

Do you still have questions? Don’t be afraid to ask. Leave a comment and we’ll try to help answer. If you’ve walked this journey once or twice, we would love to hear your story and any advice you’ve gained through your pregnancy journey.

Here is a great story from a husband’s perspective: https://www.crossfitinvictus.com/blog/a-tale-of-two-births/

First trimester, did you avoid certain movements or start scaling anything? Are burpees okay?