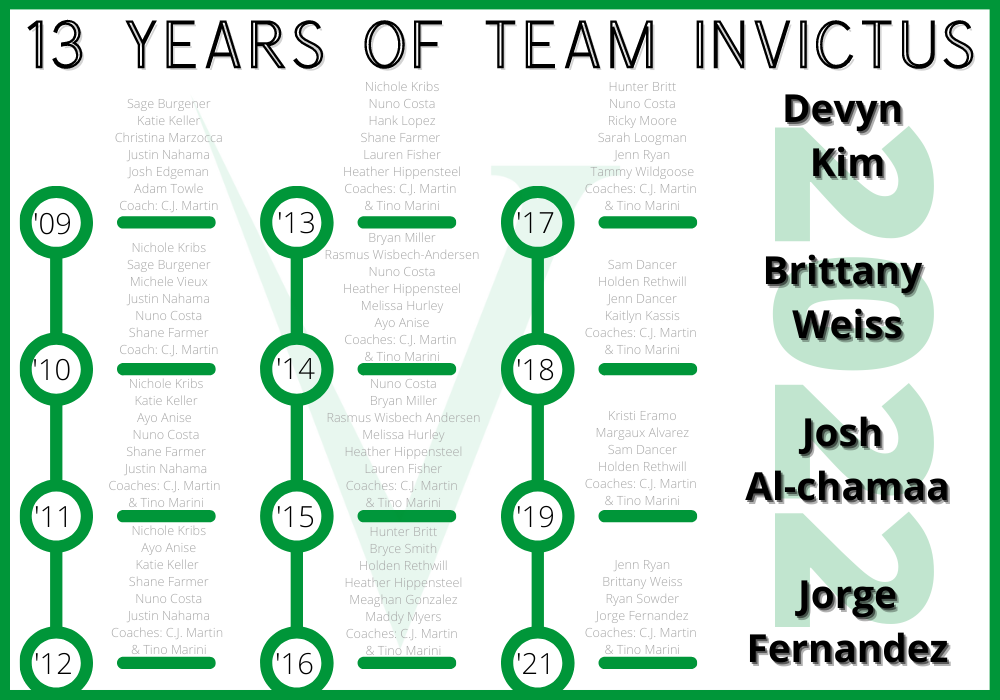 Ever since the CrossFit Games has included a Team Division – be it in Aromas, Carson, or Madison – Team Invictus has been there to compete on the world’s greatest stage. With so many years in the Games, there are also so many memories to go along with each one. Here are a few of the fun and standout moments in our minds…

Team member Katie Keller’s young golden retriever – Toby – accidentally won the run event when she ran onto the course after, then past, her super speedy mom!

At this time, Invictus’s color was red. That was also the case for most of the other CrossFit gyms at the time so in order to be easily spotted in the crowd, Coach C.J. Martin and his support team wore the first Invictus green shirts in history. Immediately following that year’s Games, Invictus officially switched its color to green.

The vendor village set-up was much different “back then”. There were only about a dozen, if that. Some shared tents. There was no running water. Not even for food vendors. M Good Meals (owned by moi who thought it was a good idea to try to sponsor a booth AND compete as individual) shared a booth with fellow San Diegans and friends, Paleo Treats. All our supporters helped cook and run the M Good booth with their cute aprons and “Gary’s Special” sandwich which was a huge hit. Also, we had bacon. So our line was the longest.

“Look! We’re on the Jumbotron!” – Michele while buddy carrying Nichole across the soccer field in Event 1. Poor Nuno had to carry Shane, our very long teammate who was basically dragging on the ground because he was so tall. That first year, most of the Team events were held on the practice field and not in the main stadium.

The “Sea of Green” is recognized and named by other spectators after we took over an entire section of the bleachers to cheer for our athletes. We were the first, highly-organized fan base thanks to Mama Karen and Pops who were in charge of everyone’s (team and supporters) food and accommodations. And to dear, but loud, Jaimie Bougie who kept all of our fans headed to the right place at the right time. Other spectators noticed, donning us the name. We liked it so we kept it!

Obviously, a LOT went into taking home the gold this year and one of those things was Ayo Anise’s 425 lbs deadlift!! (Her lift is at 1:04:35) One thing we were lucky to have gone into it was Heather Hippensteel being able to compete. It’s a little known fact that just days before the Regional qualifier, Heather severely injured her hand while battling an avocado. She pushed through that Regional with a sliced up hand that healed just in time for Games weekend.

2017 – Invictus wins the First Ever Coliseum Workout in Madison

(watch the battle to the end)

Invictus had 3 teams representing us this year – Team Invictus, Invictus X, and Invictus Back Bay (Boston).

Back Bay finished in 9th and Team Invictus finished in 32nd this year but most remarkable was how Invictus X dominated the final workout to secure 2nd place on the podium. The workout was:

*Lunging with the Worm when advancing

Many might not know this but the worm was once a sworn enemy of Invictus. Since one trying workout many Games ago, the athletes have begun to love the wooden beast and it showed with this workout that propelled them to a podium finish!

Invictus tied Mayhem for 1st on this event with 1385 lbs.

Obviously, this is the ultimate dream and has been for many years. Two of our team members – Brittany Weiss and Jorge Fernandez – were members of the 2021 Team. Devyn Kim was previously an Invictus Teen athlete. And Josh Al-chamaa is new to Invictus Athlete this season. None of them are new to competition though – they’ve been training for this their whole lives!

At the time this article was published, Team Invictus was sitting in 4th place at the end of Day 1. One down, four days to go. Let’s do this!