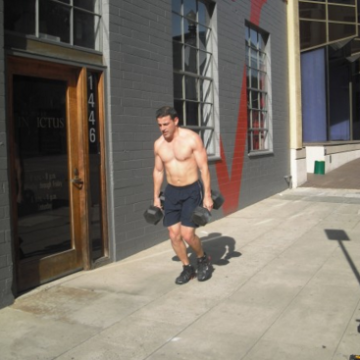 Mike V. didn’t wait for the Look Good, Feel Good, Play Good Challenge.  If he did, he would have to be considered a heavy favorite.  Mike came to Invictus with a bit of weight to lose.  He wasn’t overweight, but he knew he was carrying more body fat than was optimal for his health and performance.  But Mike’s resolve to change his body composition and performance has been incredible – and not surprisingly, so too have his results.

On our suggestion, Mike submitted himself to hydrostatic body fat testing at FitnessWave.  His first test was on May 7, 2009 and showed the following:

We encouraged Mike to follow our principle-based nutrition guidance – “Eat meat and vegetables, nuts and seeds, some fruit, little starch and no sugar.”  He stuck with that, and made good use of The Paleo Diet website and Robb Wolf’s website as resources.

To be totally honest, Mike was not nearly as consistent with his workouts.  Mike has a beautiful daughter, Sophia, and between work and spending time with Sophia, Mike was only able to workout consistently twice per week.  Nonetheless, with a pretty decent compliance to our nutrition guidance, Mike saw some pretty darn good results when he was retested on October 17, 2009:

So, Mike’s total changes modifying his diet and doing the Invictus workouts twice a week, were as follows:

Mike has not slowed down since.  He’s in the Challenge and is poised to get his body fat percentage down to 12-14% before it’s over, while still adding lean mass.  Challenge competitors beware!