David and Sabrina: The Father-Daughter Duo 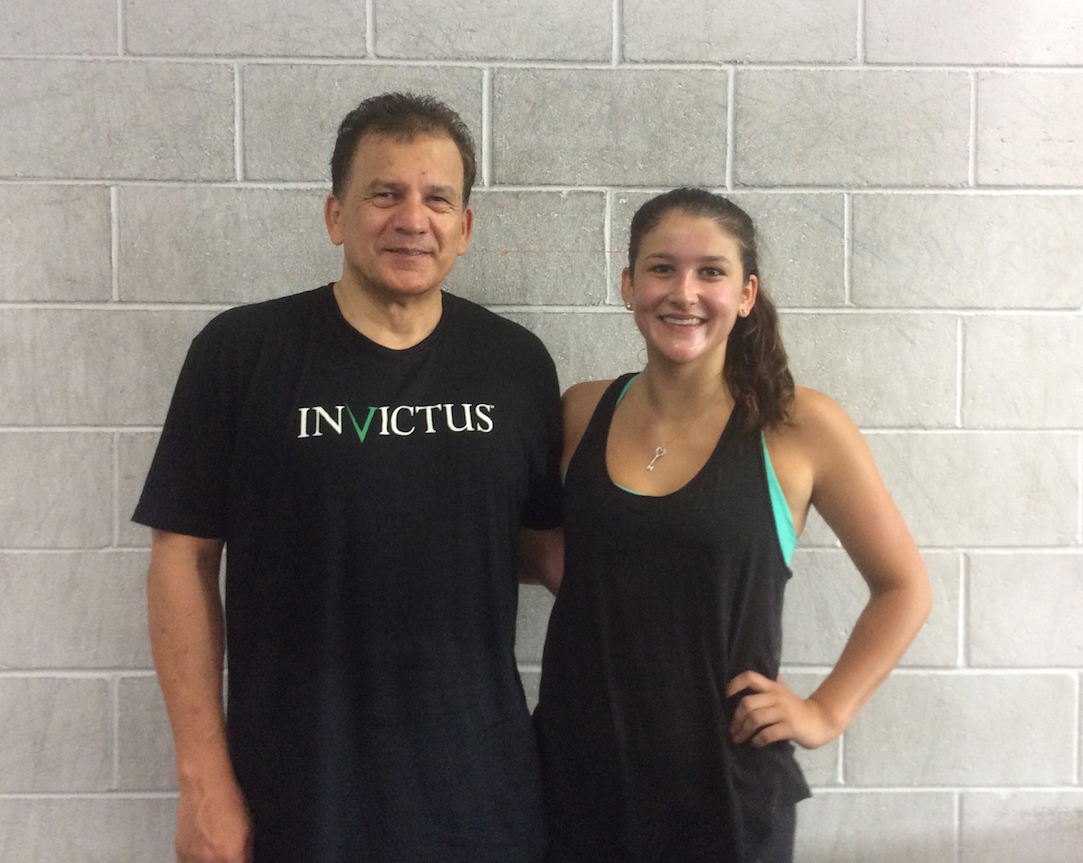 David and Sabrina: The Father-Daughter Duo

If you have not been to our 6:00 a.m. class at Point Loma, you probably haven’t had the pleasure of meeting the best father-daughter duo out there. David and Sabrina Silva are part of our early bird crew and even though they have only been with Invictus for about a year, they are no strangers to the world of CrossFit.

David started at CrossFit SoCal in 2007. Before that, he used to attend a bootcamp class near his home. One day, at one of the classes, the instructor mentioned the crossfit.com website and he commented that the workout for the day was 100 pull-ups. Since David considered himself a pretty fit individual but wasn’t sure he could do even one pull-up at that time, he wanted to figure out how to master this challenge. He looked up CrossFit gyms in the area and found CrossFit SoCal. He said that when he walked in the door of that gym he was greeted by a pregnant woman busting out pull-up after pull-up. He knew this was where he wanted to spend his time.

The only problem was that CrossFit SoCal was far away from his home. Because of the commute, he decided he could only go to CrossFit SoCal on Saturdays and continue with the bootcamp classes and eventually join a CrossFit gym close to his home. Every time he drove to one of those weekend workouts at CrossFit SoCal, he brought his two daughters with him. It was here that Sabrina remembers doing her first ever CrossFit workout with her Dad – “Fight Gone Bad”. She was hooked from that moment on.

After a few years at SoCal and a few different gyms closer to home, David took a bit of a break from CrossFit to rest an injury and Sabrina left for college at Cal State Long Beach. Somewhere over the course of her freshman year, Sabrina knew she wanted to transfer schools but hadn’t decided on a location. She happened to drop into a class at Invictus with Coach Melissa and she loved it! She said it was that class and the potential to be part of the Invictus community that was one of the biggest factors in deciding to stay in San Diego for her sophomore year.

David joined the Invictus community in January of 2015 and Sabrina quickly followed in May. Since signing up, they have been regulars at the 6:00 a.m. class. David says that the best thing about Invictus is the community and the coaches, but the fact that he gets to work out with his daughter every day is priceless.

“We do a lot of team workouts which are fun and Sabrina IS my team. You can’t beat that father daughter bonding time,” he says.

Sabrina says that CrossFit has helped her gain a ton of confidence and it made her realize that being strong is a good thing.

“I went through a really tough year and a half where I was sick and battling with anorexia. It was hard on my family and friends and it was an awful time in my life. Luckily, CrossFit helped me recover from that. It taught me that I was fine the way that I was. It was fine to eat until I was full and it was a good thing to be strong – it’s actually something to be admired and appreciated.”

When asked what motivates them to come in so early day after day, they both said:

“Well – after the fact that we’ve payed for it and we remind each other of that a lot. It’s the feeling you get after the workout is over. By the time the class ends, it’s only 7:00 a.m. and you’ve already accomplished something in the day.”

Both David and Sabrina are hard-working, amazing individuals who bring a fun spark to Invictus Point Loma and we’re so happy they are part of our community! Make sure to say hi to both the next time you see them!