The Transformation of Bo Smith 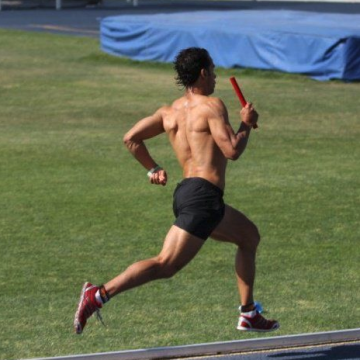 Once upon a time, a client/friend of mine asked me to contact her friend, Bo Smith, about CrossFit.  Bo needed to get in shape, but thought CrossFit wasn’t for him.  It took a few calls, but in August 2009 Bo was finally ready to jump in.  He didn’t know what he was getting himself into, but it set him on a journey to a transformed life, where health became a priority for him and those around him.

Bo and his wife were expecting their first child when we began training. This was key motivation for him to kick it in gear.  At 42, he had been less than active for too many years and just the thought of keeping up with a little one made his lower back hurt.  He knew that while he couldn’t do anything to change being an “old” dad, he certainly could fix being a “fat” dad.

Bo weighed 235 lbs. around the time he was getting started.  Although he rode his bike regularly, his insurance company rated his “health age” as 48, six years older than his chronological age.

Bo is now approaching his one-year anniversary, and his changes have been phenomenal.

More important than the changes he has made to his exterior is what is going on “under the hood.”  Here are some results from his blood panels:

Additionally, Bo had been taking cholesterol medication for the past 3 years. The results from June 2010 reflect his cholesterol with NO MEDICATION!  Through exercise and nutritional change, he no longer needs to take any medications!

Bo’s training was purely based on CF & Crossfit Endurance which meant he was putting in between 8-10 total training hours a week.  He finished Super seal in 3 hours and 4 minutes.  He enjoyed it enough to follow it up with the San Diego International on June 27 and finished the 1K Swim, 30K Bike, 10K Run in 2 hours and 23 minutes.

Bo travels a lot for work, so we train on Monday & Friday mornings.  He attributes planning as the key to his success.  He realizes that he doesn’t have to change everything at once, but rather his success is in steady progress and changing those things that matter the most.  His adopted mantra is, “Progression, not perfection,” which keeps him on track.

In his own words:

Nuno and CrossFit have given me the tools to live an active, healthy lifestyle forever. The dynamic nature of CrossFit keeps the workouts interesting and allows me to train through whatever I might be feeling on any given day.  However, it wasn’t until January when making a commitment to nutrition and eating better allowed me to make real gains in a hurry.  I could never go back to the person I was and can now be an active, engaged and healthy role model for my son Mason!  A year ago, I would never have thought I’d being doing tri’s much less running on a regular basis. I had never run more than a 5k continuously and couldn’t swim a full lap in the pool! Now looking forward to half Ironman!

I am super proud of the progress, dedication, hard work and determination Bo has shown over the past year that I have been training him.  Keep up the great work Bo, and continue inspiring those around you.

(Editor’s Note – Phenomenal job Bo!  It’s been inspiring to see your commitment to improving your future and setting a wonderful example for your family.)