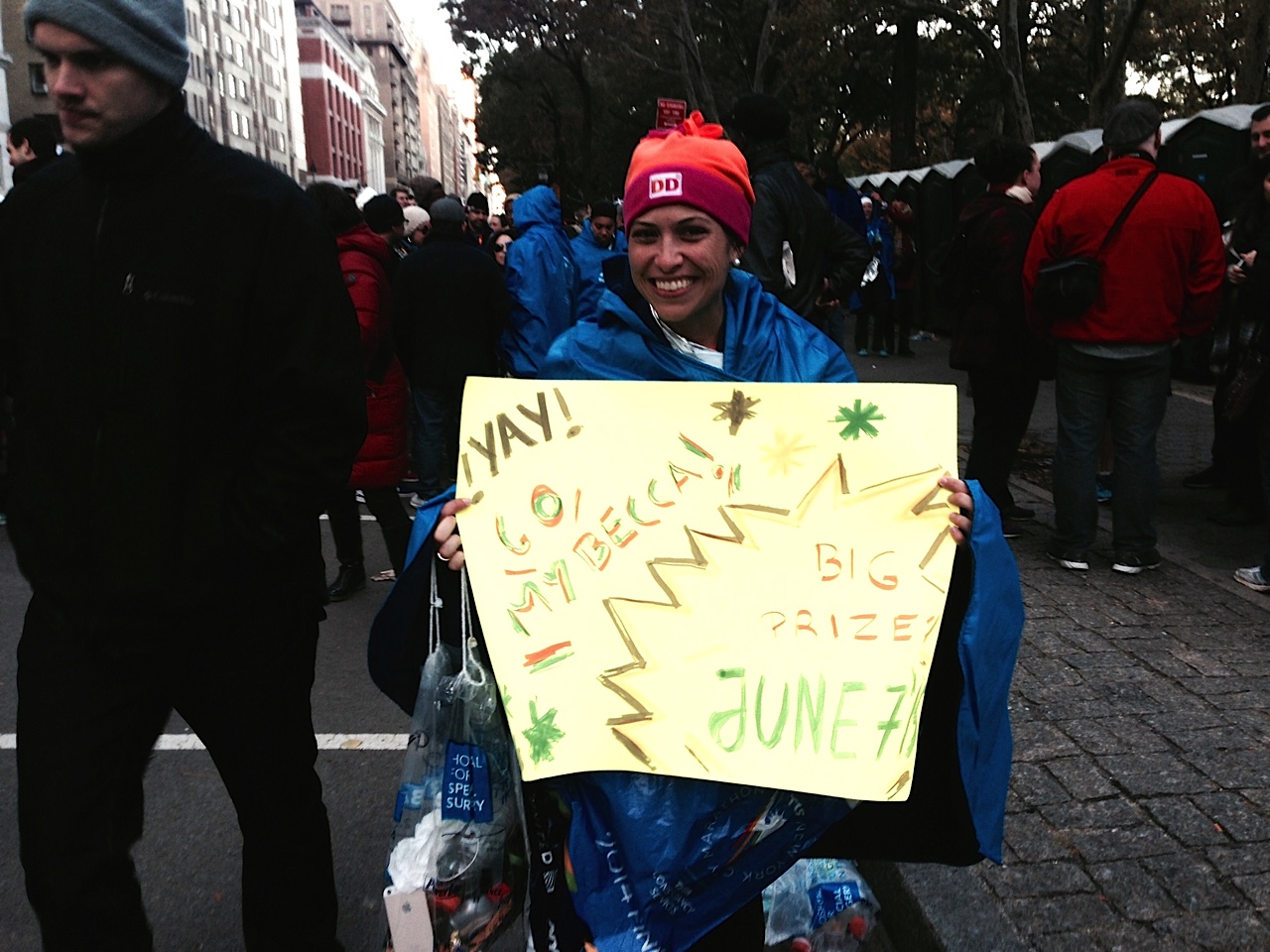 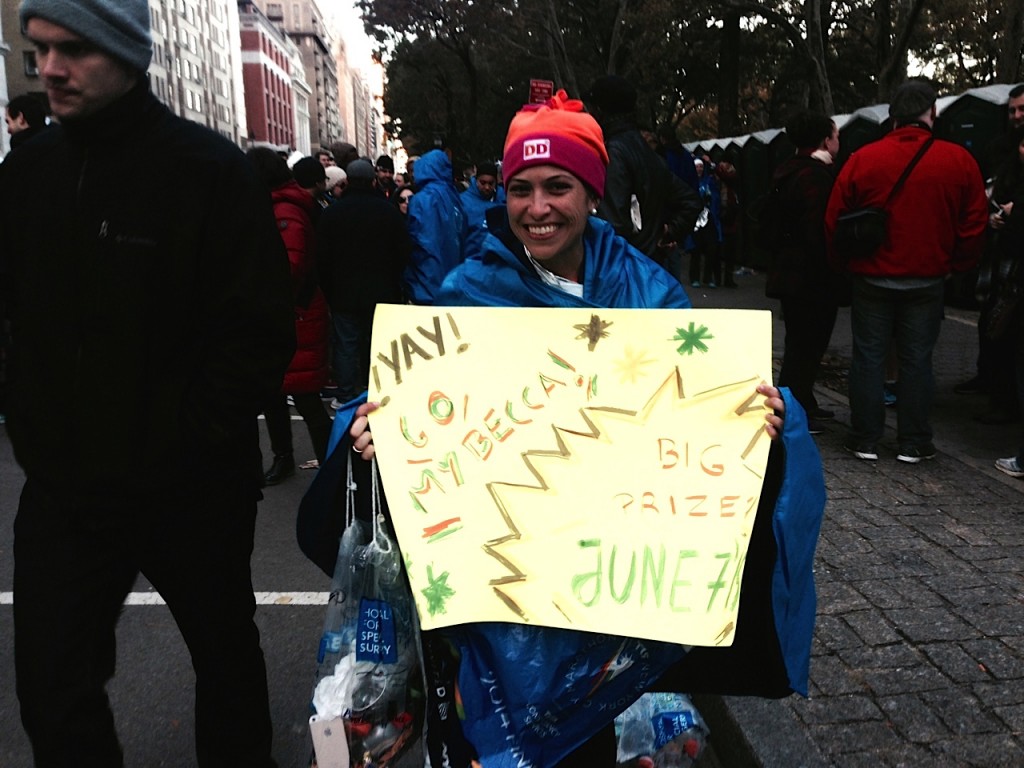 If you haven’t met Rebecca yet, you need to. She’s a 6:00 am-er with an infectious smile and a persistently positive attitude. She joined the Invictus community less than a year ago and she’s just an amazing person. She recently returned from New York City where she completed her 4th marathon and PR’d by over 20 minutes. Her story is one of perseverance, persistence, and an unwavering dedication to her goals.

Rebecca wasn’t always a runner. In fact, she claims, “I couldn’t even finish a 2 mile run back in 2009.” With the help of a personal trainer, however, she worked hard and completed her first half marathon in 2010. Determined to run more after that half, she continued to improve and train using long slow distance runs but hit a bump in the road in March of 2011 when she tore her left ACL. After talking with the doctors, Rebecca decided to skip the surgery and just treat the injury with physical therapy. It seemed to work and she was back to running and training. She completed her second half marathon in the spring of 2012 without an ACL.

While the part of her life that revolved around running was going well, there were other stressors that made 2012 a rough year.

“I was going through a divorce after having been married for 10 years and I was hitting what felt like a low point in my life. I needed some new goals to focus on so I looked into what it would take to complete a full marathon,” remembers Rebecca.

Once again, training with long runs, she completed her first one in January of 2013 and a second one in the summer of that same year. For her third marathon, the Mardi Gras Marathon in Louisiana, she was running to raise money to put a Malawian girl through high school. Even though the she finished the race, this was the toughest one for her.

Explains Rebecca, “I developed a stomach cramp at mile 14 and struggled to complete the rest of the race. I was burned out on training and running. After a careful look at myself I determined that I was running at too heavy a weight. I needed to find a different workout regime.”

She took a look around the neighborhood and decided to try out something called CrossFit that her brother and sister-in-law had been raving about. Luckily, Invictus was right around the corner and on one fateful day in March, she walked through the door, asked a few questions, and signed up that very same day.

After completing fundamentals, she joined Nuno’s Nutrition Program and that was exactly what she needed.

“Nuno just has a way of speaking the truth to you when no one else can. The accountability and the information provided in that nutrition program really gave me the tools that I needed to lose my initial 8-9 pounds and drop an entire pant size!”

Rebecca also decided to join the Invictus Endurance program and even though (according to her) she was the last one around the track for almost all of the workouts, she loved it. “Everyone was very encouraging and friendly and the community both inside of the gym and at the track was great.”

A few months into her membership, Rebecca also decided to take part in our ‘Look Good, Feel Good’ challenge. Despite the fact that she traveled for work nearly every other week, she was determined to stay focused on her eating and training. She dropped in to several gyms around the country, worked with Coach Melissa to ensure that she had something to do her hotel room when a gym wasn’t available, and she joined the Pete’s Paleo bandwagon so she didn’t have to worry about the prep time that comes with cooking for yourself. Rebecca fully credits the combination of the Nutrition Program, the Endurance Program and the LGFG Challenge for both her running and body composition success.

Rebecca says that since the initial 8-9 pound weight loss, the scale hasn’t really moved but she’s still down another pant size and she PR’d her marathon time by an amazing 20 minutes! According to the hydrostatic testing results, she is down to her ideal body fat percentage and she says, “For the first time since I started dieting at the age of 16, I don’t want to lose any more weight. All I want to do is maintain.” 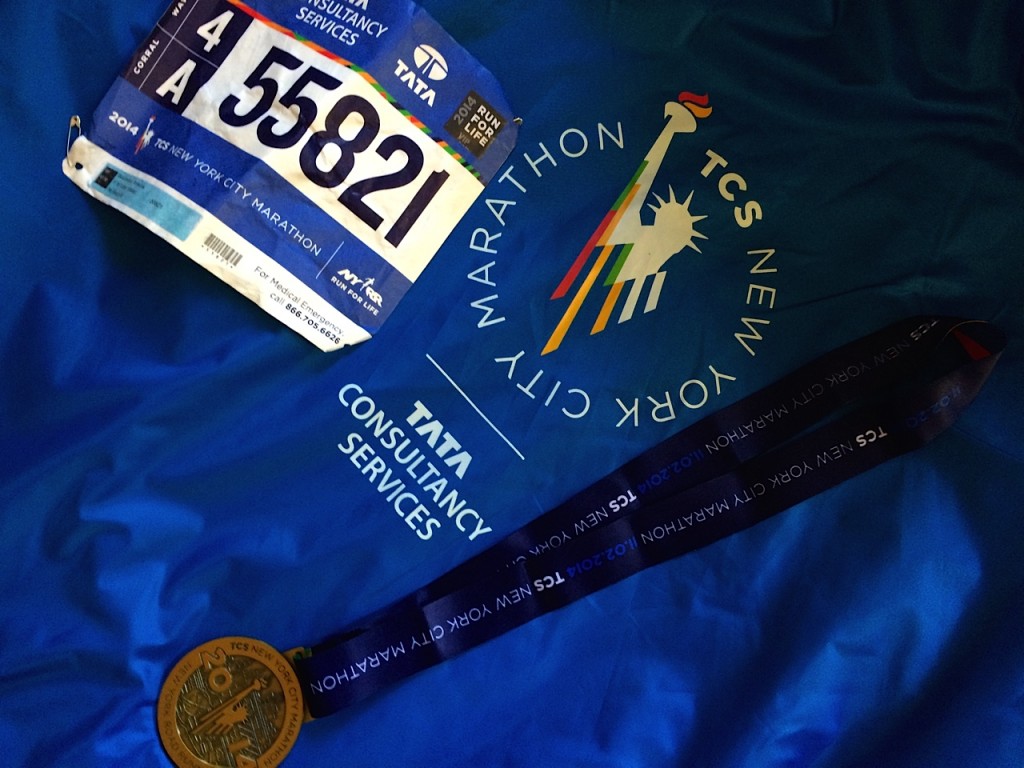